10 Things to Do in Seattle This Christmas 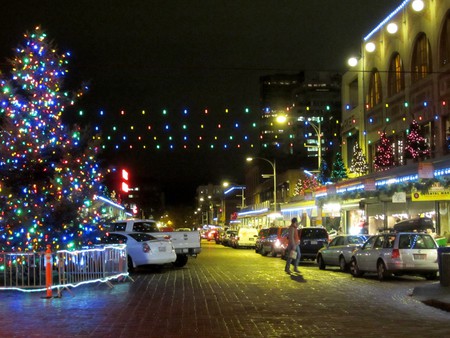 Christmas is a big deal in the North. The days get quite short, making the darkness real, so a reason to light up the town figuratively and literally is more than welcome. Though the entire state of Washington offers incredible holiday experiences, from the Leavenworth Christmas Tree Lighting Festival to Snowflake Lane in Bellevue to The Polar Express Train Ride in Elbe, the following are ideas for getting into the holiday spirit specifically in Seattle.

The performances in Seattle are pretty limitless in general, not to mention during the holiday season. Whether you’re in the mood for something traditional or unique, options abound. Top suggestions include the Pacific Northwest Ballet’s The Nutcracker, the Seattle Men’s Chorus’ Sassy Brassy Holiday, the Great Figgy Pudding Caroling Competition, and more racy performances such as the Land of the Sweets: The Burlesque Nutcracker.

The holiday season wouldn’t be complete without light displays. The Woodland Park Zoo puts on its annual WildLights with over 600,000 energy-efficient (this is still Seattle after all) LED lights and a barrage of fun activities, which includes an indoor snowball fight in Snowmazium. The Seattle Art Museum also gets in on the fun with SAM Lights at the Olympic Sculpture Park. With temporary light installations, the admission-free opportunity allows a unique view of the park; there is also live music, warm beverages, and treats. 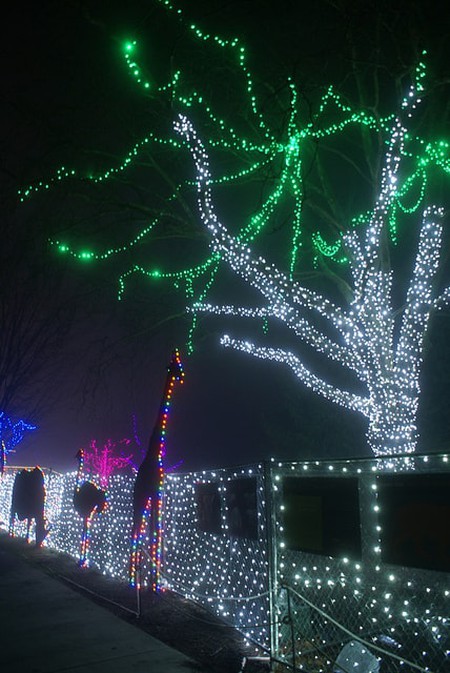 As a port city, it only makes sense that Seattle would extend the celebration to the water. The Argosy Cruises Christmas Ship™ Festival has been brightening the Puget Sound since 1949. The Spirit of Seattle ship is decorated with white lights and sails to approximately 65 different waterfront communities, where the choirs onboard serenade the spectators on shore. The 3rd Annual Christmas Ship™ Parade of Boats Night anticipates a following of over 70 boats this year, all decorated in Christmas lights, as they proceed from Lake Union through the Fremont Cut.

Since Seattle has a relatively temperate climate, snow is rare, and bodies of water typically don’t ice over; therefore, Seattleites create their own little winter spots. The Westlake Center, in the heart of Seattle’s shopping district, will light its Christmas Tree on November 24, 2017, followed by the famous Macy’s Holiday Star Lighting Ceremony and Fireworks. Also in the area will be the Holiday Carousel (with proceeds going to charity), food trucks, and the Holiday Market. Alternatively, head to Winterfest at the Seattle Center for a winter train and village, an ice rink, ice sculpting, and carolers.

Like it or not, December all over the country means shopping. Magic in the Market brings the holidays to world-famous Pike Place Market on November 25, 2017. The event includes photos with Santa, free cookie decorating, live music, and the lighting of the Market’s 20-foot holiday tree as you start Christmas shopping. Also, keep an eye out for Urban Craft Uprising, “Seattle’s Largest Indie Craft Show.” Their Winter Show will take place the first weekend in December at the Seattle Center, and they will also be present at Westlake Center’s Holiday Market.

For kids, get your photo with Santa—while he’s underwater. This year, Santa is diving into the 120,000-gallon Window on Washington Waters exhibit at the Seattle Aquarium. Older kids, and some adults, may want to tag along, too! For adults only, try these on for size: Bad Santa Photos on December 3rd at Rhein Haus (21+ event) or December 16th’s Seattle SantaCon 2017 (“much more than a pub crawl”).

Yes, it’s cold, but get off the couch! Green Lake Pathway of Lights’ 2.8-mile (4.5-kilometer) trail will be lit up on December 9, 2017, with more than 2,000 candles. Come out for music, drinks, and treats, and don’t forget to join the lighting yourself with glow sticks, lights, and the like. Donate non-perishable food to the local food bank as well. Alternatively, hit up the Jingle Bell Run the next day for a 5K that participants can run or walk. All of the registration fees and fundraising go to the Arthritis Foundation. Holiday costumes are encouraged! 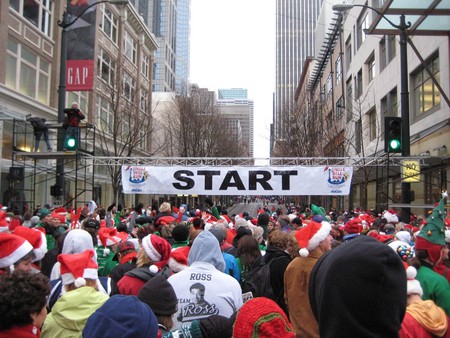 To get your holiday song fix in a big way, check out Holiday Pops on December 9, 2017, at Benaroya Hall for classics performed by the Seattle Symphony and the University of Washington Chorale. For something less traditional, check out The End’s 25-year-old, annual Deck the Hall Ball on December 5th, featuring The Killers, J GRGRY, The Lumineers, J Roddy Walston and the Business, ODESZA, Portugal. The Man, and Joywave.

For decorations beyond Christmas lights, consider the Sheraton Seattle Hotel and the Fairmont Olympic Hotel. The Sheraton Seattle’s Annual Gingerbread Village goes beyond the simple gingerbread house, with an elaborate architectural and culinary display; it benefits the Juvenile Diabetes Research Foundation. The Fairmont Olympic Hotel works to benefit the Seattle Children’s Hospital with their stunning Festival of Trees and their Teddy Bear Suite—one of their largest suites brimming with all kinds of teddy bears.

Finally, there are also some festivals that don’t have anything to do with winter and use the season’s spirit as an excuse to celebrate—which is still awesome. To start off, support local brewers through the Washington Brewers Guild. The Winter Beer Fest will feature over 50 different local breweries at Magnuson Park during the first weekend of December. Otherwise, check out the sixth annual Pioneer Square Howlidays, complete with free entertainment, a pop-up pooch park, and a holiday costume contest—for the dogs.