Houston’s Terracotta Army replica has 6,000 soldiers a third of the original size

Head to Texas to see a replica of China’s Terracotta Army at Lucky Land culture park.

The story of the original Terracotta Army is spectacular. Keen to be protected in the afterlife, Qin Shi Huang – China’s first emperor – had a vast set of over 8,000 life-size soldiers built, alongside chariots, cavalry and musicians. When he died, the army was buried with him in a necropolis that covered an astonishing 38 square miles (98 square kilometers).

Discovered in 1974, the 3rd-century soldiers are all different, with a range of facial features, dress and weaponry – most of them originally carried real spears and swords. 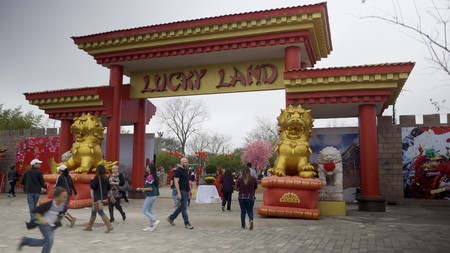 Many have now been removed from the burial site, drawing huge crowds wherever they’re shown. It seems they’ve done their job so far: the emperor’s tomb remains as yet unopened.

Houston’s more recent replica of the army is 6,000 strong, and while the models are only a third of the original size, they still make an impressive horde. The army can be seen lined up in ranks in a sunken, walled pit in a China-themed culture park called Lucky Land, but at one point they were destined for the scrap heap.

The figures were previously part of Houston’s Forbidden Gardens park. When that park shut in 2011, the soldiers lay forgotten until an enterprising woman named Nida Lee, who ran a nearby open-air flea market, saw an opportunity and bought them all – making them Lucky Land’s central feature. Lucky Land also features rickshaw rides, models of pandas and warrior monks, robots, lanterns, photo opportunities and gardens, plus acrobatic and martial arts displays.

It aims to create a “beautiful and serene environment” and showcase “deep Asian culture and history” through its displays. Food stalls offer dishes influenced by Chinese, Lao, Vietnamese and Thai cuisines, as well as some Mexican food.

Keen to feast your eyes on this miniature Chinese army? Lucky Land is found at 8625 Airline Drive in Houston – a 15-minute drive north of Downtown. It’s open Tuesday to Sunday.