Frank Shepard Fairey is an American contemporary street artist and graphic designer, who emerged from the skateboarding scene. He was born and raised in Charleston, South Carolina and lives and works in Los Angeles, California. He became involved with art in 1984 when he started to place his drawings on skateboards and T-shirts. 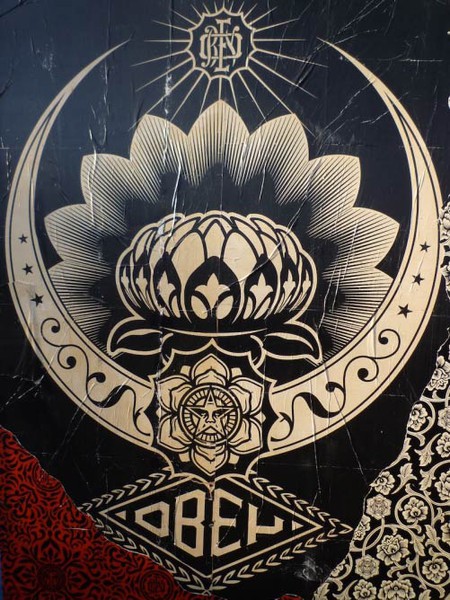 In 1988 Shepard Fairey graduated from Idyllwild Arts Academy in California, and in 1992 he earned a Bachelor of Fine Arts in Illustration from the Rhode Island School of Design. Fairey first became known for his André the Giant Has a Posse (OBEY) sticker campaign, which he launched while studying at the Rhode Island School of Design. The project depicted images of the late professional wrestler, André the Giant, accompanied by slogans like “This is Your God,” and appeared in public spaces in major cities around the globe. The Institute of Contemporary Art in Boston calls him one of today’s best-known and most influential street artists. 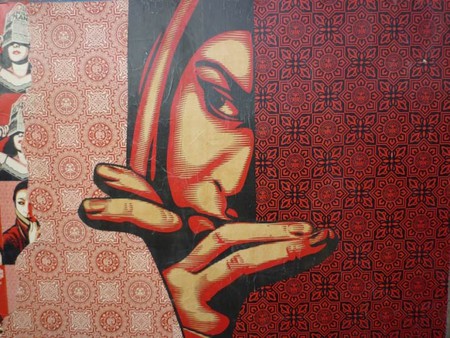 Fairey has been involved in various controversies, mainly related to the allegations that he uses other artists’ work without permission. Critics have also accused Fairy of selling-out to produce his Obey clothing line, manipulating politically charged imagery, and hastening the exploitation of street culture. However, his imagery remains iconic.

In 2008, Fairey created a series of posters supporting Barack Obama’s candidacy for President of the United States. He became widely known during the presidential election for his infamous Barack Obama Hope poster. The poster of Obama, a graphic depicting the candidate in a style reminiscent of Russian propagandist imagery with the word ‘Hope’ drawn in big, bold letters underneath, achieved the rare feat of becoming a visual emblem of a particular moment in American history.

Obama, of course, won the election. Fairey spoke about the production of the poster saying, “I wanted to make an image that deracialized Obama, where he’s not a black man, but a nationalized man.” However, because the poster had been distributed independently and illegally by Fairey, the Obama campaign declined to have any direct affiliation with it. Fairey did say in interviews that he was in communication with campaign officials during the period immediately following the poster’s release. The street artist distributed 300,000 stickers and 500,000 posters during the campaign, and in February 2008, he received a letter of thanks from Obama for his contribution to the campaign. In January 2009, the Hope poster was obtained by the US National Portrait Gallery and was unveiled on January 17, 2009 as part of the gallery’s permanent collection. Fairey received the Brit Insurance Design of the Year Award in 2009 for his Hope poster. 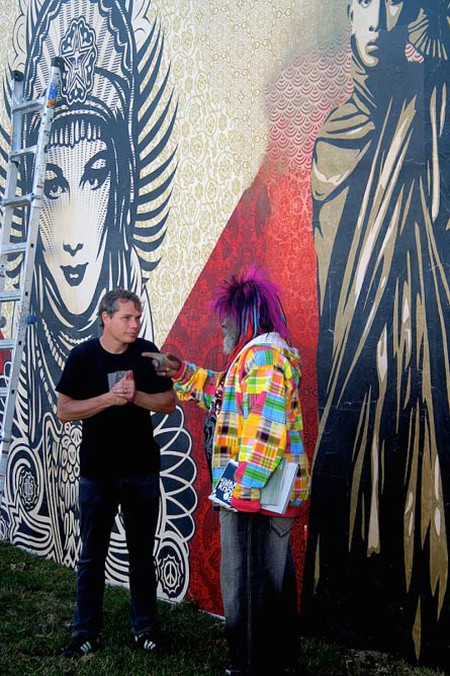 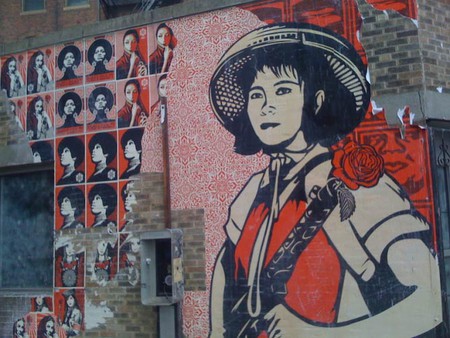 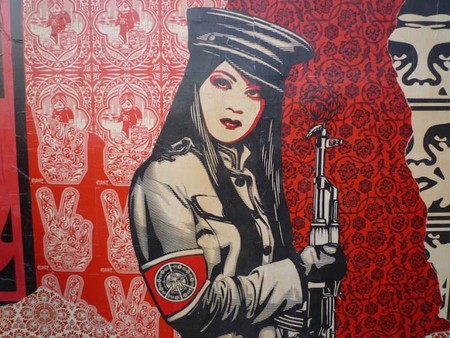 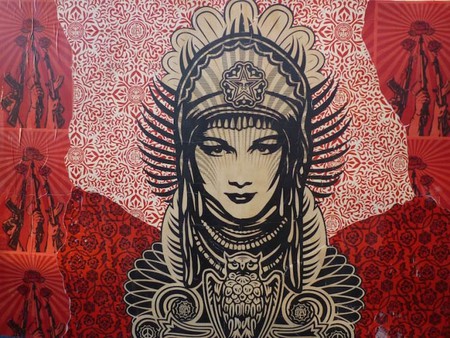 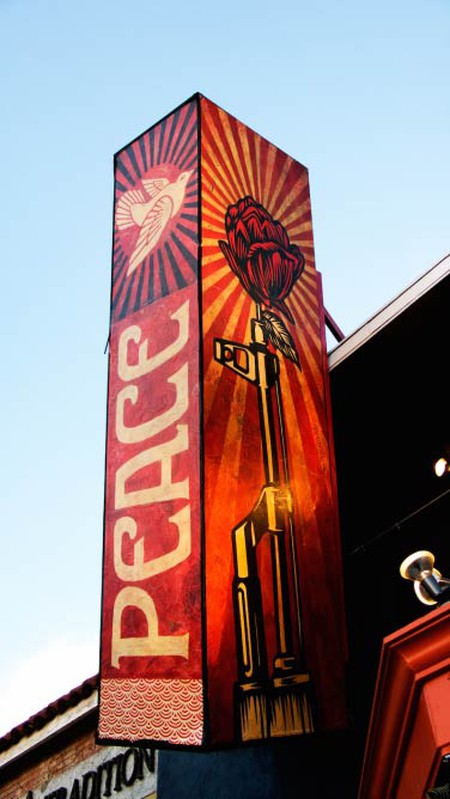 Fairey’s Hope poster for the presidential elections set the stages for Fairey to launch his first solo show, titled Supply and Demand, at the Institute of Contemporary Art in Boston. Fairey’s work is extremely diverse and combines elements of pop art, graffiti and Marxist theory. Fairey has been involved in both solo and group exhibitions in many different places. He has held solo exhibitions in 2000 in Capsule, Birmingham, England, in 2003 in the Kantor Gallery Window, New York City and in 2007 in the Merry Karnosky Gallery, Los Angeles, California. He has participated in group exhibitions in 2001 at CPOP Gallery, Detroit, Michigan, and in 2006 at the OXOP Gallery, Minneapolis, Minnesota. 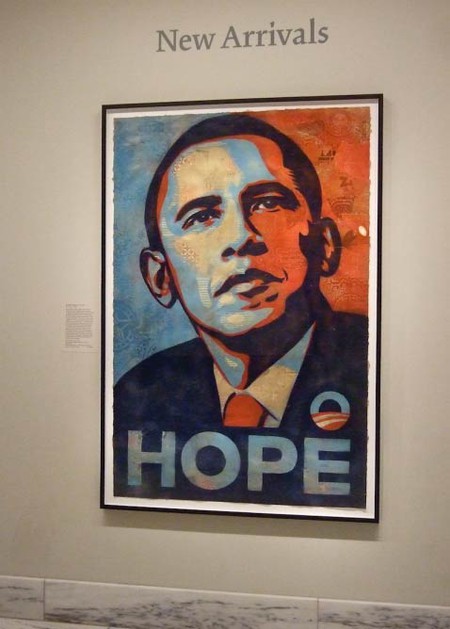 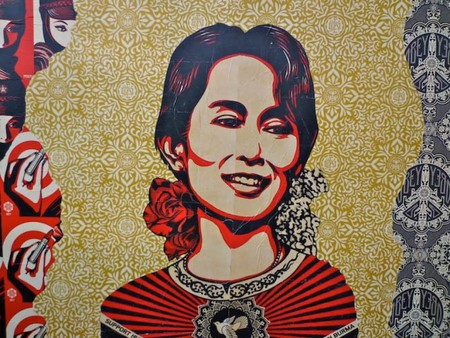 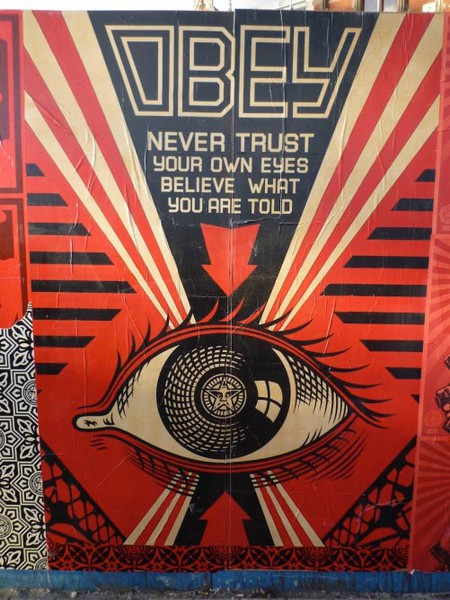