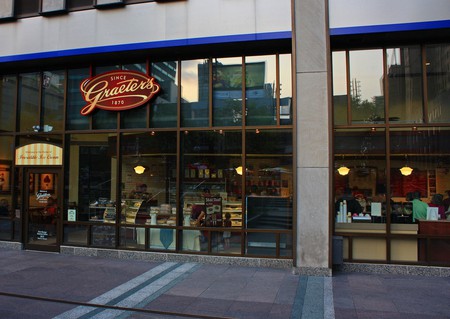 In Cincinnati, Graeter’s Ice Cream is a frozen treat mainstay. Graeter’s has been serving up handmade French Pot ice cream for nearly 150 years and is still the ice cream go-to for thousands of Ohioans.

In 1868, Louis Graeter moved to Cincinnati, Ohio, and began selling ice cream at local street markets. Little did he know that this was the start of nearly 150 years of ice cream history!

He and his wife, Regina Berger, opened a storefront close to the turn of the 20th century. They were known for their French Pot ice-cream-making process, which requires it to be made one batch at a time but ultimately leads to a thicker, creamier result.

Graeter’s opened its first franchise in the 1980s, and today, the French Pot process is still used at its dozens of locations throughout Cincinnati and the Midwest. Each batch is hand-packed to retain flavor and consistency. The ice cream is available at Graeter’s storefronts as well as grocery stores and online.

Saturday Night Pints 🍨…..how did I grow up in Ohio but not have Graeters before 🤷🏼‍♀️ #sogood #icecream #eatdessertfirst #graeters

Today, Graeter’s is a Cincinnati favorite and a local icon. Stop by for a first date, 10th date, or an afternoon with the kids, and you won’t be disappointed.