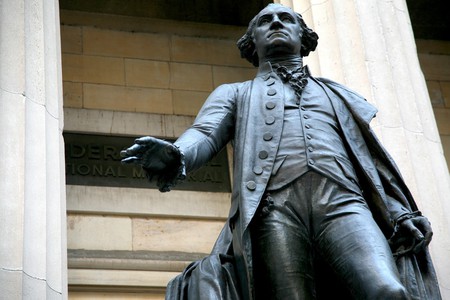 Most tourists in Lower Manhattan are too preoccupied with the Charging Bull or Battery Park to recognize the “birthplace of American government” just around the corner. For anyone curious about the statue of George Washington guarding 26 Wall Street, we have a history lesson for you.

Before the current structure standing at 26 Wall Street was constructed, a building erected in 1703 for an important purpose occupied the space. Here, New York City’s first City Hall hosted several momentous firsts, including the formation of the first Congress, Supreme Court, and Executive Branch, the enactment of the Bill of Rights, and the inauguration of the country’s first president, George Washington. It was on the balcony of the original Greek Revival structure—renamed Federal Hall in 1789 when it became the capitol building of the newly formed United States—that Washington was sworn in as the first-ever President of the United States. 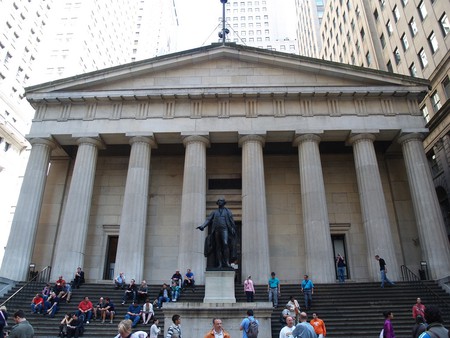 Sadly, the building’s status would soon be withdrawn and all but forgotten. Following the 1790 relocation of the U.S. capital from New York’s Federal Hall to Philadelphia’s Independence Hall, the building struggled to stay relevant as an office for local government. The opening of the current New York City Hall sealed its fate, and the landmark building was razed in 1812. Thirty years later, after more than a decade of setbacks and complications, a new structure serving as a U.S. Customs House opened at 26 Wall Street. In 1862 after Customs relocated to 55 Wall Street, the building was adopted as a United States Sub-Treasury location, a purpose it served until the Sub-Treasury system was replaced in 1920. At that point, some 130 years after Federal Hall’s fame-claiming event, the building was abandoned once more.

In a positive twist to this American tale, Federal Hall is anything but forgotten today. The building, designated a national monument in 1955, now serves as a museum of our first president and our nation’s beginnings. Here, history buffs can glimpse part of the original balcony where Washington was inaugurated and a document listing the salaries of 18th-century U.S. politicians. A bronze statue of Washington erected in 1882 stands on Federal Hall’s steps, hinting to American passersby about their own origin story they may not even know.