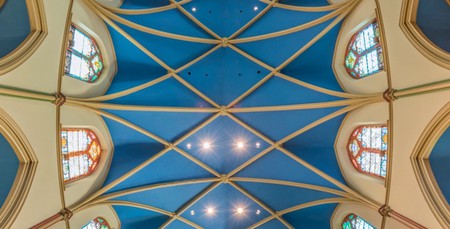 The interiors of religious structures are undoubtedly some of the most breathtaking architectural wonders of the world. Ornate atriums, elaborate altarpieces, vivid stained glass — photographer Richard Silver has been uniquely capturing these architectural wonders since be began photographing church ceilings in 2011. Creating a 180-degree experience, Silver shoots down the nave (center aisle) from the altar at the front, along the ceiling and down to the exit doors in the back. The resulting vertical panorama is a compilation of six to ten individual shots that Silver has digitally stitched together. Though he photographs cathedrals and basilicas around the world, Silver began the ‘Vertical Churches‘ project in his native New York City. Let your gaze drift heavenward to take in both the sheer scale and the intricate details of the vaulted ceiling.

The present-day incarnation of the Church of St. Vincent Ferrer was built in 1918 by Bertram Grosvenor Goodhue, a celebrated architect in neo-gothic design and one of the foremost ecclesiastical architects in the United States in his time. Shortly after completion, it was named one of the top 50 most beautiful structures in the US.

Our Lady of Pompeii | © Richard Silver

Church of St. Paul the Apostle

Built between 1876-84, the late Gothic Revival exterior of St. Paul the Apostle was constructed from granite stones salvaged from the former Croton Aqueduct. It houses works of art by several renowned 19th-century artists, including an altar designed by Standford White and murals and stained glass windows by William Laurel Harris and John La Farge.

Church of the Village | © Richard Silver

Church of the Village

The history of the Church of the Village is one of a long string of mergers and name changes. The original iteration, the First Wesleyan Chapel on Vestry Street, dates back to 1833, until the name was changed to Central Church and a new sanctuary was completed in 1856. The church was renamed Metropolitan Temple in 1896, and upon burning to the ground in 1928, was rebuilt in 1932. The Duane Street Methodist Episcopal Church was absorbed into Metropolitan Temple in 1939, resulting in the Metropolitan-Duane Methodist Episcopal Church. Today’s church is the byproduct of a 2005 merger of said Metropolitan-Duane Methodist and the All Nations and Washington Square United Methodist churches.

The cornerstone of St. Francis Xavier was laid in 1850 on W 16th Street between 5th and 6th Avenues and served the Roman Catholic congregation until 1877, at which point it became evident that larger accommodations were needed. During an evening service on March 8th, panic unfolded after a woman hysterically (and erroneously) cried ‘Fire!’, resulting in a stampede that killed six women and a young boy. Thereafter, a larger structure just to the west of the original site was undertaken and finished in 1882.

Church of Our Lady of the Scapular-St. Stephen | © Richard Silver

This Gothic-style church known as Grace Church was constructed in 1846 by the young architect James Renwick Jr. and would prove to be the foundation from which Renwick built a career as one of the most successful architects of his time (see Saint Patrick’s Cathedral below).

St. Vincent de Paul has a storied history, most notably as the site of Edith Piaf’s marriage to fellow French singer Jacques Pills in 1952. Sadly, a mandate from the Roman Catholic Archdiocese of New York closed the church in 2012, despite being met with stiff opposition, and ended a long-standing history of service to its historically French-speaking congregation.

Our Lady of Guadalupe at St. Bernard's Church | © Richard Silver

Iconic among NYC’s historic buildings, St. Patrick’s Cathedral is a site of pilgrimage for devout Catholics and tourists alike. Built at the behest of NY’s first Archbishop John Hughes as the site of the ‘new’ St. Patrick’s (replacing the old location on Mott and Prince Streets), the cathedral was designed by James Renwick, Jr. in the Gothic Revival style. Construction was completed in 1878 thanks to the contributions of thousands of poor immigrants and gifts from prominent citizens, while further donations were raised in a fundraising fair — the largest ecclesiastical fair ever held in the U.S.

Church of the Most Holy Redeemer

The Church of the Most Holy Redeemer was established in 1844 on East Third Street to serve the burgeoning population of German immigrants in that area, formerly know as Kleindeutschland (Little Germany). The complete relics of little-known Roman martyr, St. Datian, are enshrined in the relic chapel, along with relics from over 150 other saints.

All Souls Church | © Richard Silver
Give us feedback