Stout, the consummate classy tavern, boasts three unique and popular Manhattan locations — the flagship store, only steps away from Madison Square Garden; tucked deep in lower Manhattan’s Financial District; and their newest pub, near Grand Central Station. Each of these stellar establishments quickly fills to capacity during the after-work hours, and remain packed until well into the night. The FiDi location features a cobblestone floor and industrial-inspired accents, while its Grand Central counterpart adds touches of tasteful elegance. The original Stout boasts 40 HDTVs and the capacity to host parties of up to 300 guests.

Patrons entering the world of Tír na nÓg can expect to leave behind the bustle and blare of 39th Street as they pass through a set of 100-year-old, carved oak Victorian double doors, salvaged from an ancient parish church. It’s like entering an old-time Irish hamlet, complete with antique woodwork and stained glass, authentic regional memorabilia, and a recreated primitive cooking pit. Every corner and cranny of this gorgeous pub represents some bygone aspect of Ireland’s village heritage. The ambiance is underscored by Tír na nÓg’s famous warmth and cordiality. Free live music on Thursdays! 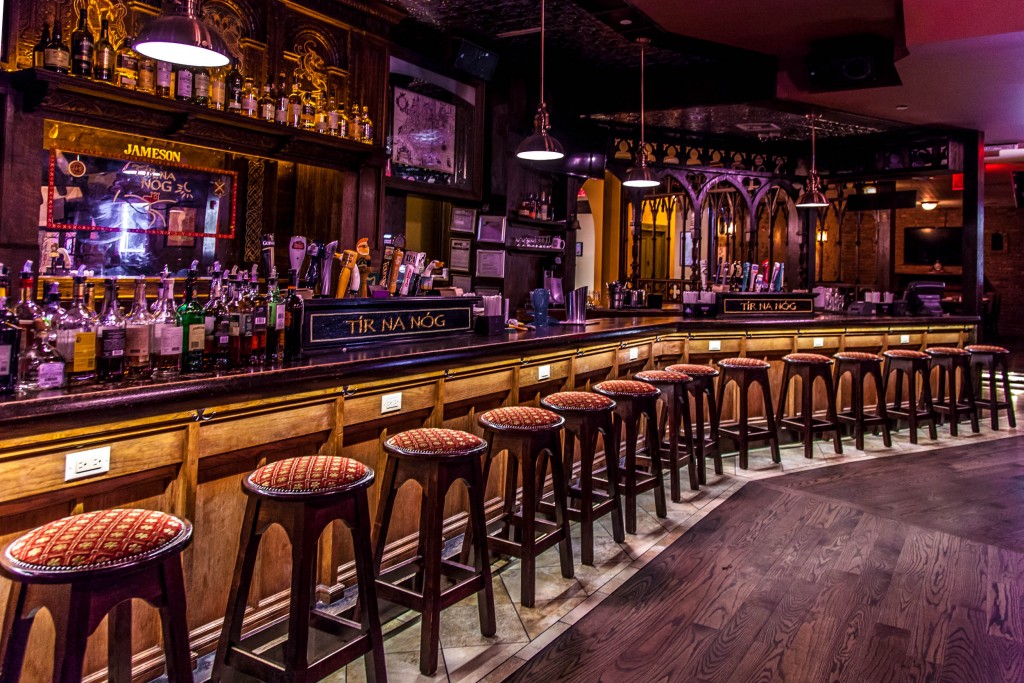 Bar, American, Pub Grub, $$$
McHale’s Bar and Grill | Courtesy of McHale’s
Irish hospitality, always on full display, distinguishes this lovely pub, which is notable for its lush and intimate atmosphere. In addition to featuring a superb dining menu that is chock full of Irish specialties, patrons at McHale’s Bar & Grill are also encouraged to enjoy a classic game of pub darts. Considered one of the hottest darts spots in town, competitors gather upstairs in the aptly named Dart Area, concentrating on the board’s bulls-eye as they aim, release, and then follow through. Three tiers of dining, each with unique sensibilities, augment the spirited sports bar area.
More Info
Open In Google Maps
251 West 51st Street, Manhattan New York, New York, 10019, USA
+12129575138
Visit website
Give us feedback

Bar, Pub, American, $$$
Bar and side dining area at Grey Bar and Restaurant | © Ric Marder Imagery
Football, soccer, basketball, baseball, rugby, hockey — whatever the favorite sport, catch all the action, including both professional and college leagues, at The Irish Pub. Don’t see the sporting event that interests you listed? Just give the pub a call, and they might just be able to accommodate your request. The ‘Pub Fayre’ menu — classic saloon entrees, along with a slew of tasty ‘pub grub’ appetizers — is a perfect complement to the tavern’s full range of beers and extensive whiskey list. And as for atmosphere, The Irish Pub always proves itself true to its motto: ‘There are no strangers here, only friends we have yet to meet.’
More Info
Open In Google Maps
837 7th Avenue, Manhattan New York, New York, 10019, USA
+12126649364
Mon - Fri:
9:00 am - 4:00 am
Sat - Sun:
7:30 am - 4:00 am
Give us feedback

Bar, Restaurant, American, Pub Grub, $$$
Grey Bar and Restaurant | © Ric Marder Imagery
Quiet by day, and hopping at night, Grey Bar is a fantastic choice for either a midday business luncheon or for letting loose at the end of a long workday. A tasteful contemporary decor belies this restaurant’s Irish roots, as does its sophisticated menu (though several signature dishes, such as the Fish n’ Chips platter, certainly telegraph a clear hint of its origins). There is nothing flashy or over the top about the Grey Bar & Restaurant, and yet, it always exudes an equal magnitude of energy and finesse as many of its larger counterparts. As an added bonus, the restaurant’s striking full-length front windows can be fully opened to allow in the sights and sounds of West 26th Street.
More Info
Open In Google Maps
43 West 26th Street, Manhattan New York, New York, 10010, USA
+12125322643
Visit website
Give us feedback

Bar, American, $$$
Beer Table at McSorley’s Old Ale House | © Matthew Hurst/Flickr
The look and the name may not seem much like it’s an Irish pub, but make no mistake, this beer lover’s mecca is, both in spirit and hospitality, as authentic of an Irish bar as one gets. The saloon’s Irish owners definitely see to that. But what truly sets New York Beer Company apart is its New York Stock Exchange-style listings of beer and ale pricing — a sliding scale based on popularity — that tickers across the top of the bar, as well as a series of individual draft taps located at multiple hi-top tables, allowing at-will access to instant refills. Sports fans will love the high-end multimedia installations, allowing quality access to a multitude of sporting events.
More Info
Open In Google Maps
321 West 44th Street, Manhattan New York, New York, 10036, USA
+12122452337
Visit website
Give us feedback

The granddaddy of all Irish pubs, McSorley’s claims title to being New York City’s oldest continuously operated tavern. Other than finally allowing and serving female patrons in 1970, the pub has remained virtually unchanged for more than 160 years. From the sawdust-littered floor, to the memorabilia cluttering its walls (including such priceless paraphernalia as Houdini’s handcuffs), to the saloon’s signature McSorley’s Cream Stock Ale on tap, there is no escaping the aura of Olde New York that permeates this storied establishment. 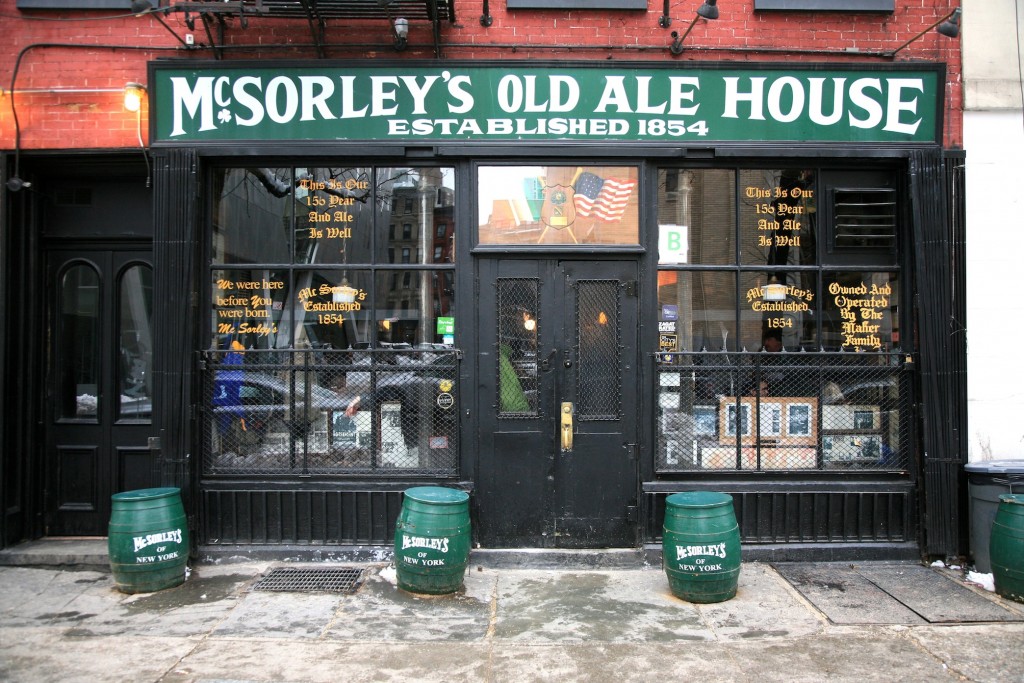 Bar, Irish, American, $$$
Beer Taps | © Eric Hauser/Flickr
The Pig ‘n’ Whistle Pub & Restaurant, located on 36th Street, stands in respectful homage to the decor and camaraderie of the original Pig ‘n’ Whistle, which opened its doors back in 1969 at the Old Townhouse, once owned by President Taft. The earlier bar, located on 48th Street, quickly became a favored meeting place for New York City’s literati and banking elite. This newer location stays true to the look and feel of the original pub, down to its oak bar and paneling, and an upstairs private party room. A visit to the Pig ‘n’ Whistle at 36th is like tipping a brew to New York’s venerable alehouse history.
More Info
Open In Google Maps
202 West 36th Street, Manhattan New York, New York, 10018, USA
+12122394820
Visit website
Give us feedback

Bar, Pub Grub, American, $$$
Touting itself as ‘The Original Hell’s Kitchen Craft Beer Bar,’ the House of Brews on 51st Street successfully merges a gritty pub presence with well-appointed overtones, evoking the best of both worlds. The menu features numerous tried and true Irish specialties, but what truly stands out is the All Day Irish Breakfast. When it comes to beer and ale, it is barely possible to keep track of the multitudinous craft brews offered at House of Brews, especially since the selection constantly updates. Which is definitely reason enough to drop in on a regular basis.
Permanently closed
More Info
Open In Google Maps
302 West 51st Street, Manhattan New York, New York, 10019, USA
+12125417080
Visit website
Give us feedback

Bar, American, Irish, $$$
Now don’t get riled up — a Galway hooker is not what you may suspect, but is, rather, a traditional sailing boat, indigenous to the waterways of Galway. So now, with that very common misperception cleared up, the Galway Hooker Bar is an intimate and cozy establishment, despite the fact that it spans four floors. The decor reflects a nautical influence, a tip of the hat to the blackened hulls and red sails of its namesake. Sports, along with rounds of pool and Irish-inspired comfort food, are continually on full display, as are the pub’s authentic West Village influences.
More Info
Open In Google Maps
133 7th Avenue South, Manhattan New York, New York, 10014, USA
+12126756220
Visit website
Give us feedback
Give us feedback