The 10 Coolest Pieces of Subway Art in NYC

New York City is a leader in the global art scene, from world-class museums and galleries to unknown street corner wunderkinds. It should therefore be of no surprise that art lurks deep beneath the city streets as well. Curated and commissioned by the Metropolitan Transit Authority, the NYC subway system features the work of some of the world’s most respected artists. Here are the ten coolest pieces of subway art in New York City. 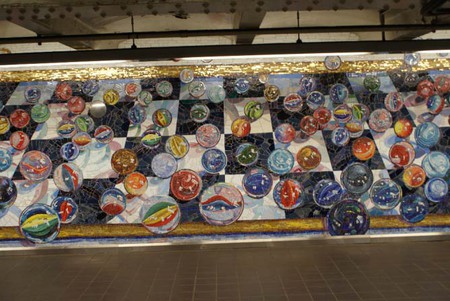 Lisa Dinhofer has the great distinction of being the only artist on this list of actually born and raised here. Born in Brooklyn, she went on to study art at Brandeis and UPenn. Her work has been shown throughout many galleries in the city. She was awarded an MTA commission in 2001 to create this wonderful mosaic piece, Loosing My Marbles. It is located at the Times Square Port Authority station. 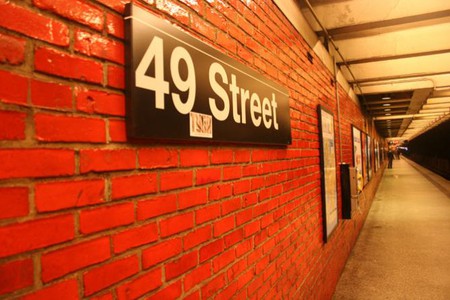 Philip Johnson is considered one of the most influential American architects. Johnson was involved in the creation of such New York City landmarks as Lincoln Center and the Seagram Building. Alongside Frank Lloyd Wright, Johnson transformed the USA’s building landscape. His contribution to mass transit comes in the guise of red brick walls and concrete benches, following the prevalent 20th-century architectural principle that ‘form follows function’.

Bing Lee is an American/Hong Kong artist who moved to New York in 1979. His work has been commissioned and designed for art installations from Hong Kong to Milwaukee. This stunning ceramic tile piece residing on the Canal Street Station is called Empress Voyage. It commemorates the return of an American trade ship from the Far East in 1794. The wares procured are depicted in each of the tiles. Mr. Lee is a member of the Tomato Grey/Godzilla-Asian American Arts Network. 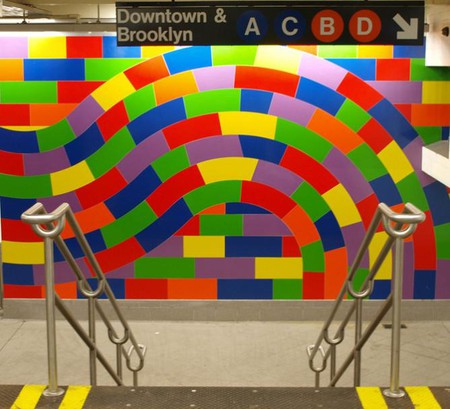 One of the leading minimalist artists of the 1960s and 1970s, Sol Lewitt’s iconic work has been displayed all over the world. Locally, his work can be seen at MoMA, MASS MoCA, the Beacon DIA, and indeed the subway station at 59th Street and Columbus Circle. This piece, titled Whirls and Twirls, is a long-term installation of ceramic tiles in six vibrant colors – a beautiful, swirling kaleidoscope of lush, colorful patterns and swirling lines. 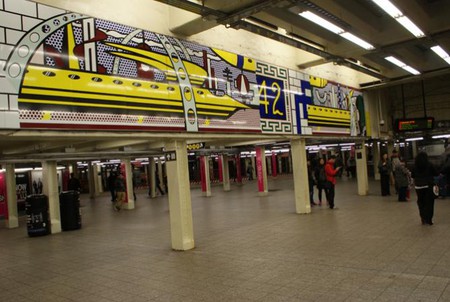 You probably have seen Roy Lichtenstein’s work without even realizing it. Along with his peers, Andy Warhol and Jasper Johns, he is considered one of the greatest American pop artists. He turned the art world on its ear with his use of the comic strip forum. His work hangs in museums around the world. This kinetic work, Times Square Mural, pays homage to the subways by using elements of the past, present and future. A lush, frenzied and kinetic treat for all.

Bill Brand’s piece, Masstransiscope, is one of the first to be commissioned by the MTA and certainly one of the most unique – part inverted zoetrope devise, part physics. The art is stationary and while its audience is moving and you won’t find it anywhere on the station platform. Baffled? Intrigued? If so, head on over to Brooklyn and experience it for yourself. You’ll need to catch either B or Q train bound for Manhattan at Dekalb in order to see. Just remember to immediately look out of the right side passenger windows after entering into the tunnel. 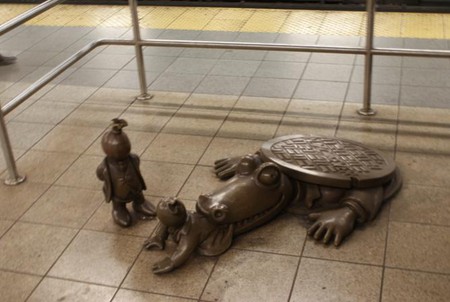 Tom Otterness’s work spans the globe, from Qatar to the Netherlands, Florida to Oregon. You can find his cartoonish, playful bronze sculptures peppered throughout New York City. One of his most famous installations is located in the subway station at 14th Street and 8th Avenue. Life Underground features Otterness’s conceptualization of capitalism run amok, featuring over 100 characters ranging from walking moneybags to sewer alligators. Otterness considers this installation one as one of his greatest projects, taking over ten years to complete.

Although there is presently no Keith Haring’s work on display anywhere within the subway system, it should be noted that there would be no art here today without him. During the late 1970’s and early 80’s his iconic and ubiquitous artwork was everywhere, especially the subways. He was in a perpetual state of constant arrest for vandalism. But Haring bravely persevered and in the process, help forge a new art form/movement. If you are not familiar with his amazing pop/graffiti artwork, want to know more, or just find a gallery displaying his work, check out his website, The Pop Shop. 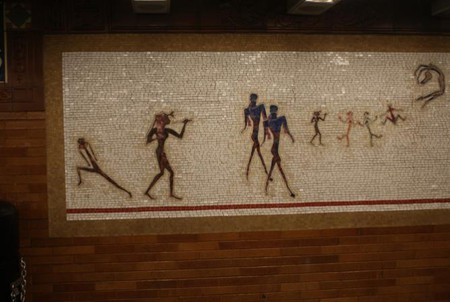 The work of the internationally respected Nancy Spero conveys a messy marriage of art and history. Her textures are interwoven with sociopolitical activism, in specific, the history of violence towards women. She was known for primarily working within the parameters of painting and collage, but for the particular piece, she decided upon tiles. The piece is called called Artemis, Acrobats, Divas and Dancers. It cannot have a more than fitting canvas than the backdrop of this Lincoln Center Subway Station.

Best known for his groundbreaking theater productions such as Einstein at the Beach and The Civil War$, Robert Wilson is an artist with a keen eye for design. Theatrics and visual art collide in his project, My Coney Island Baby. Using glass brick as his canvas, Wilson’s creations come to technicolor life. While Coney Island may be slightly out of the way, why not make a day out of it? Ride a roller coaster and feel the sand between your toes.