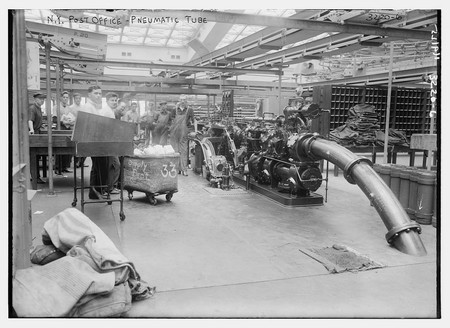 Most people probably don’t realize that New York City used to have a system of pneumatic tubes firing cylinders containing letters, packages, and other more bizarre things around the city. Today, only one example of the technology is still visible.

In 1897, the American Pneumatic Service Company put the 27-mile pneumatic tube system into operation, connecting 22 post offices in Manhattan and the General Post office in Brooklyn. Each of the routes in the city featured two tubes: one for receiving and one for sending cylinders. Prior to the tube system, only horse-drawn carriages and carriers on foot were used to move mail around the city.

The system featured a two-foot-long steel cylinder that was fired through a cast-iron pipe pressurized by rotary blowers and electrically driven air compressors. The eight-inch canisters inside were designed to carry up to 500 letters and could travel up to 30 miles per hour. The pipes ran between four to 12 feet underground and at the height of its operation, the system carried around 95,000 letters per day, around a third of all the mail routed through New York City.

The tubes didn’t just carry mail either. The postal workers were fascinated by the system and, somewhat cruelly, even attempted to send a cat through the system. “He was a little dizzy, but he made it,” Joseph H. Cohen, historian for the New York City Post Office, told Wired back in the ’90s.

Ultimately, it was the high operating costs rather than the questionable animal practices that led to the downfall of the tube system. By 1918, the annual rental payments for the system reached $17,000 per mile, per year, and were described as exorbitant by the federal government which endorsed a new alternative to transport mail: the automobile. Chicago, St. Louis, and Philadelphia all lost their tube systems first. New York’s was halted temporarily but restored in 1922 after lobbying by contractors. It was in use until 1953. 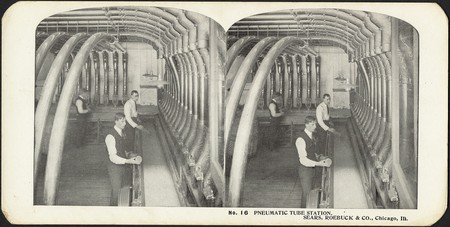 Although no cylinders now pass through them, the tubes are almost all still underground somewhere in New York. The tubes on Brooklyn Bridge were removed during renovation in the 1950s, while establishments such as the Waldorf Astoria also dismantled the smaller sized systems they had in use.

But there is one place you can visit in New York City that still has a pneumatic tube system on display. If you head to the NY Humanities and Social Sciences Library, the tubes are still visible, although as of a renovation in 2016, sadly also non-operational.