The Joy of Discovering Little Artworks Around New York City 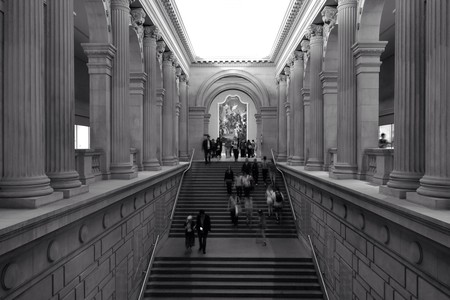 Amy Young is the mystery woman behind guerrilla art project See Me Tell Me. An art professor at City College, Young makes tiny artworks in her free time and leaves them all over New York City for those who discover them to keep, photograph, share, and enjoy.

See Me Tell Me began circa 2011 when Young was working at a gallery in Manhattan. “I realized that people who bought a small, inexpensive work of art were just as thrilled as those who bought a million-dollar work,” she told the New York Post. “What excites people is the discovery, the adventure in finding that work.”

So, she decided to foster that joy by creating miniature works of art from miscellaneous materials, and leaving them at various sites across the city for people to find. “I make small, anonymous and slightly magical packages which are gifted across the world,” Young explains on the project’s website. “My belief is a return to what I feel has been lost in art—surprise, chance, enchantment—and a desire to replace commodity with interactivity and community.”

Each work of art bears a tag with the project’s Instagram handle, @seemetellmenyc. When one of her pieces is found, the lucky passerby can photograph the object and let Young follow it’s subsequent journey. “See me!! I am a gifting street artist,” she explains on the project’s Instagram. “Collect a work? Tell me! Found more? Leave it, re-gift or take it somewhere fun. Instagram when you do.”

Released a DREAMER along my favorite lavender lake. See Me!

As the photographs on the See Me Tell Me Instagram account suggest, these sneaky works of art can be found taped up in subway stations, on street walls, lamp posts, and hidden in public sculptures. Along with her “surrogates,” Young has scattered some 8,000 artworks across North America, the United Kingdom, France, Germany, Spain, Greenland, Italy, Cambodia, Turkey, Mexico, Australia, Cuba, Belize, Greenland, the Virgin Islands, Costa Rica, and beyond, with 1,000 “gifts,” as she calls them, created in the past year alone.

“One guy picked a piece up in New York and took it to Japan,” she told the New York Post. “A woman found one of my pieces in Arizona and took it home to Seattle.”

Placed a few MISSING MONUMENTS at the removed #Banksy site. See Me!

While planting little artworks around the city doesn’t affect the locations in which these objects are placed, Young has been met with some opposition. When she was caught leaving one of her pieces in Philadelphia’s Barnes Foundation, she was escorted out of the building by security guards, who warned her not to return.

“I’m less of a vandal than a graffiti artist [is],” she said. “The only reason I would get into trouble is if [the authorities] consider it littering.” She admits to a penchant for leaving little gifts in the stairwells at The Met and the MoMA in New York City. “I like to explore my city, New York, and the world,” she writes on her website. “I especially like to discover the art left behind by those who were here before us…and those here with us now.”

First #stikman of the day!

The purpose of See Me Tell Me is simple, though profound: there’s no need to spend millions in order to collect art, or appreciate an artwork at that. Sometimes, art bears greater significance when it’s found, serendipitously, for free.