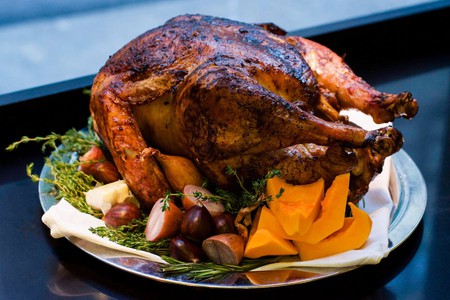 Everyone’s favorite food-focused holiday is only a week away, and whether you’re visiting NYC, or spending it there while your family is elsewhere, or just don’t want to cook, there are plenty of options for traditional-style Thanksgiving dinners at some of the city’s best restaurants. Here are our top picks.

Do note: some of these places have different hours than usual. Check the restaurant’s website, and we highly recommend you make a reservation in advance. Thanksgiving isn’t the day to be left shivering on the sidewalk as you wait for a table.

Where better to spend Turkey Day than at a restaurant that’s all about poultry? Le Coq Rico, known for its focus on heritage chicken breeds, is offering a four-course fixed menu for $90. The all-bird menu features duck foie gras terrine; turkey consommé and black truffle ravioli; stuffed heritage turkey with an assortment of sides; and a gingerbread and caramelized apple tart for dessert.

Less than 2 weeks until #Thanksgiving – we’ll do the cooking while you do the entertaining. Book your reservation for a Thanksgiving dinner experience which includes a whole Stuffed Red Bourbon Heritage Turkey, multiple courses and sides to go around – orders will be taken up until 11/16. (📸: @thisgirlcaneat)

Meat-focused gastropub The Breslin is offering a three-course prix fixe for $85 per person. You’ll have two options per course, and they’re keeping things traditional with dishes like venison terrine en croute; turkey with all the usual trimmings; and pumpkin or pecan pie.

The Dutch is offering a three-course meal—with the main course served family-style—for $125. That main will be organic turkey with every imaginable accompaniment, from roasted brussels sprouts and sweet potato casserole to spoonbread stuffing with andouille sausage. Appetizer choices include clam chowder or steak tartare; and for dessert you might pick apple pie or a pumpkin cream puff.

For Craft‘s three-course meal, a selection of appetizers—scallops, wagyu carpaccio, and an arugula salad—are served family-style, and you can choose between turkey, sirloin steak, and salmon for the main course. Side dishes and desserts for the table run traditional, like cranberry sauce, sweet potato puree, and sauteed mushrooms; and apple crisp, pumpkin pie, and spice donuts for dessert. It’s $150 person, or $110 for a vegetarian meal.

At Maialino, you can choose between a four-course “Italian-American Thanksgiving” set menu or one consisting of the restaurant’s classic dishes, each for $115. Go more traditional, and you’ll be eating dishes like chestnut and celery root tortelli and apple crumb crostata with brown sugar-bourbon gelato (and, yes turkey); go with the restaurant’s favorites and your meal will include stracciatella alla Romana, abbacchio al forno, and tiramisu.

Malfatti, a Maialino Classic, with braised suckling pig and arugula. On #Thanksgiving we’re preparing a special twist on this classic with watercress.

Vegetable-forward Narcissa is offering an $84 three-course menu with options that include traditional Thanksgiving treats as well as signature dishes like chef John Fraser’s famed carrots Wellington. We’re told that those who opt to dine in the restaurant’s garden will take their meal in yurts. Of note: This restaurant’s a great option if your group includes both vegetarians and omnivores.

Join us November 23rd for a special #Thanksgiving menu. Looking for something new? We’re also serving in our yurts so you can enjoy all of the delicious dishes of a home-cooked Turkey Day in The Garden. RSVP: yurtreservations@standardhotels.com

Autumnal options on the Thanksgiving menu at Gotham Bar and Grill include pumpkin tortellini, seared foie gras with fresh figs and medjool dates, and roast venison, as well as the traditional turkey and a choice of pumpkin mousse, a bourbon pecan tart, or the restaurant’s famous chocolate cake. Three courses will run you $150.

For a slightly more casual take on the big meal, the two locations of Quality Eats are offering turkey-based special dishes including a roasted turkey monkey bread sandwich ($25) and a fried turkey bucket for two ($65pp). Sister restaurant Quality Italian will serve up a turkey parm pizza for two—a twist on its renowned chicken parm pizza.

Join us on 11/23 from 4pm – 9pm at our #UpperEastSide and #WestVillage locations for our #Thanksgiving specials – including this Roasted Turkey Monkey Bread Sandwich with Faicco’s Sausage Stuffing, and Cranberry Mostarda! Reservations are now available online.

For those to whom the holiday is as much about drinking as it is about feasting, there’s Maison Premiere. Brooklyn’s favorite oysters-and-absinthe bar is offering a three-course turkey dinner for $75. In addition to turkey, options include dishes like honeynut squash bisque, ricotta cavatelli with rabbit ragout, and foie gras torchon. The bar, with some of the best cocktails in NYC, is open until 4am just in case a few drinks are needed to help soothe frayed nerves post-family dinners.

The calm before service.. #maisonpremiere #Brooklyn