How New Yorkers Are Channeling the Jazz Age 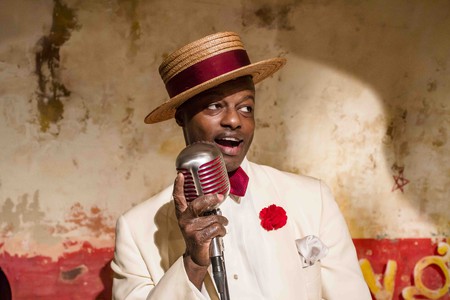 It’s hard to miss Dandy Wellington. The Harlem born musician walks into a crowded room and immediately steals glances for his impeccable style that evokes the bygone eras of the 1920s and 30s. Wellington—who is lead vocalist of Dandy Wellington and His Band as well as member of the performance group, the Harlem James Gang—taps into a larger nostalgia scene that thrives here in New York City. A sub culture in which dimly lit speakeasies host young people sipping gin rickeys, who look as though they’ve been plucked from the pages of a Fitzgerald novel.

I met Wellington one warm summer morning at The Roxy Hotel in Tribeca. The Roxy, much like Dandy himself, is like a window into the past. The exterior of the hotel is modeled after a 1920s movie theater—complete with a marquee—while the hotel hosts a rotation of jazz musicians, including Wellington. In short, The Roxy is the perfect place to sip champagne and pretend you’re enjoying a version of NYC that predates Donald Trump, iPhones and wearing sweatpants in public. 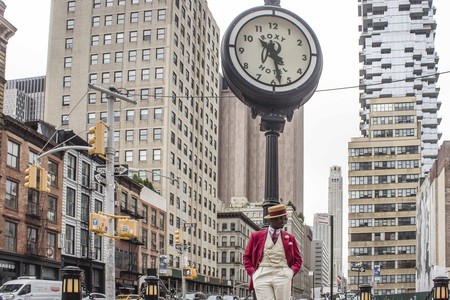 I’ve always had an inexplicable love of the Roaring Twenties, have always romanticized it, much like Owen Wilson’s character in Midnight in Paris (2011). I’m fascinated by flappers with their felt cloche hats, men with their fedoras, the classic 1924 Chrysler B70s that once clogged the cobblestone streets of the “Big Apple.” Yet, my love of the Jazz Age exists once a year at the annual Jazz Age Lawn Party, which throws a summer soiree that could rival Gatsby. For Wellington, his love of all things vintage is a way of life.

“There are hundreds of us that live this [vintage] lifestyle everyday and this is just how we dress, this is how we are,” explains Wellington. “It’s not like we’re not modern people though, we check our Instagram likes and Facebook statuses and read the news on our phones just like anyone else. By no means am I somebody who lives an antiquated life.”

Wellington is part of a larger nostalgia movement in New York of talented, young people who seamlessly balance the trappings of a modern life with a love of decades past, despite never having experienced those eras firsthand. For Wellington—who is a New York University graduate—it’s his music and style that is a medium for his love of the 1920s and 1930s.

Wellington describes his music as traditional jazz that encompasses everything from the rhythms and sounds of New Orleans to the Harlem stride piano era taking influence from the likes of Willie ‘The Lion’ Smith. While Wellington’s playful fashion sense puts a strong emphasis on classic menswear; he’ll just as easily wear a vintage boater hat one day and pair a cravat and top hat the next.

To the knowing eye, glimpses of this city’s nostalgia culture can be seen in the vintage shops, burlesque performances and original speakeasies from the Prohibition Era that dot NYC. “This sort of [fascination with past decades] has been happening for a long time,” adds Wellington.

In the 1970s the country saw a Dixieland resurgence of New Orleans hot jazz stepping back into the spotlight. In the 1990s, pop culture saw a swing revival, that is credited to the 1989 Los Angeles band Royal Crown Revue. In the past few years, we’ve seen a Jazz Age revival sparked by Baz Lurhmann’s big budget film, The Great Gatsby (2013). 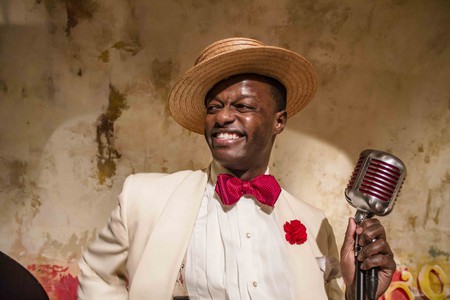 “It’s history at the end of the day and our perspective on history and how it interacts with our own modern lives ebbs and flows, but the history is still constant,” says Wellington. “I think that something all of us are trying to do—and why we love [that history] and feel ownership over it—is because we can amend it in a lot of ways.”

There is something appealing yet oddly familiar about the 1920s—a decade marked by transition, the loosening of morals and the rise of youth culture. A decade in which—for better or worse—cares were thrown to the wind, only to be hit with a rude awakening in the 1929 stock market crash and subsequent Great Depression. Perhaps—dare I say it—we as a society are coming off our own, footloose high only to be confronted by a slew of social, political and environmental issues. All of a sudden, looking to past decades seems enticing. 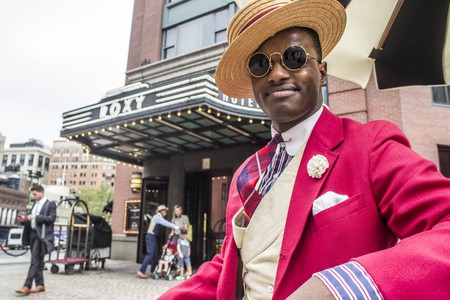 In New York City, escaping into the past is all too easy. “New York is one of the oldest cities in this country and is intensely steeped in history,” says Wellington. “There are so many beautiful, historic landmark buildings: there’s Grand Central Station, the New York Public Library, the Metropolitan Museum of Art.”

To tap into New York’s nostalgia culture, Wellington recommends places like Astoria’s Astor Room, which saw the likes of Charlie Chaplin and Gloria Swanson raise a glass after a day spent filming at the nearby Kaufman Studios; or Chelsea’s Bathtub Gin, which gets its namesake from the liquor made during the Prohibition Era. Harlem’s 67 Orange Street similarly resembles a classic speakeasy, while vintage shops like David Owens Vintage and Tender Buttons sell garments from past decades.

“We are connected to our history and there are a lot of people here who will never forget it,” muses Wellington. “What we do is, we look back to aesthetics and some of the finer things that make us happy because this is just our version of living through New York and finding our happy place.”