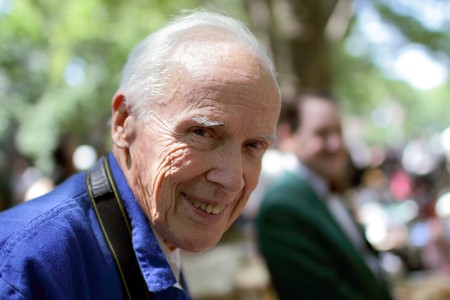 On June 25th 2016, iconic street fashion photographer Bill Cunningham passed away in New York City at the age of 87. A household name and cultural legend, Cunningham was best known for his almost 40-year career with the New York Times, through whichhe became a celebrity in his own right. We take a closer look at Cunningham’s life and astounding career in commendation and celebration of everyone’s favorite blue-clad bicyclist.

There’s no way you could miss him — the signature cobalt blue French workman’s jacket, the bicycle, and the small yet powerful camera in hand — Cunningham was a New York celebrity, and many made it their mission to get in front of his lens. Photographs are a dime a dozen in today’s society, but there was nothing quite like a photograph taken by Mr. Cunningham himself. Even Vogue Editor-in-Chief Anna Wintour admitted in the 2010 documentary Bill Cunningham New York, “We all dress for Bill.” 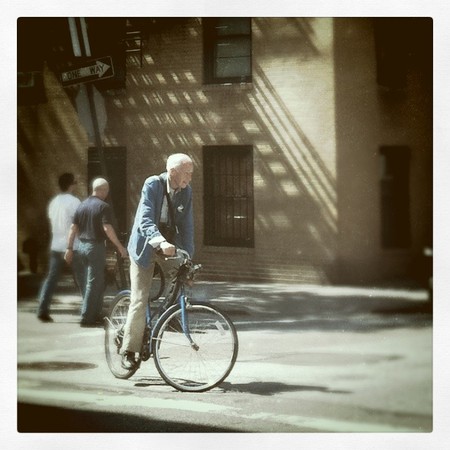 Most New Yorkers are at least familiar with Cunningham’s work, but his legacy far surpasses a collection of photographs. The founding father of street fashion photography, Cunningham subsequently turned the art form into a cultural phenomenon, documenting trends and faces (both celebrity and unfamiliar), while bringing fashion off the runways and into the everyday. Mr. Cunningham once said to The Times, “I look for the personal style with which something is worn — sometimes even how an umbrella is carried or how a coat is held closed. At parties, it’s important to be almost invisible, to catch people when they’re oblivious to the camera — to get the intensity of their speech, the gestures of their hands. I’m interested in capturing a moment with animation and spirit.” Thus Cunningham viewed fashion as an integral cultural structure worth documenting and analyzing.

His fascination with fashion began at an early age. As a child, he fell in love with the church-goer’s trend of wearing a hat, which later prompted Cunningham to open a hat boutique in New York City. His small shop on the last floor of a building was only the beginning of his fashion journey, but his path to editorial stardom wasn’t entirely straightforward. Not much time passed before he was enlisted to fight in the Korean War and leave his beloved hat shop behind. He returned in 1953 and found work as a writer. Fashion photography was still somewhat provincial at the time, thus Cunningham was given the freedom to cover any runway he wished to attend. His first choice was the Courrèges show, as Cunningham felt this lesser-known designer was a step beyond bigger labels such as Saint Laurent, with the capacity to have a greater impact on fashion culture than more established fashion houses. He subsequently played a heavy hand in introducing foreign designers with unconventional aesthetics to the American public. 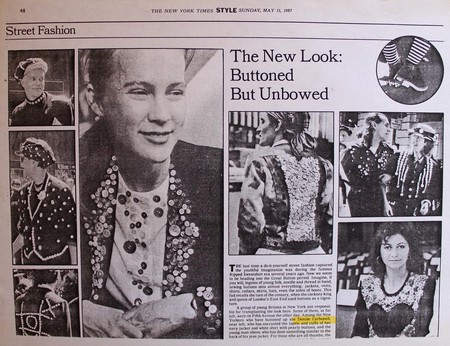 It was this exact foresight that proved crucial to Cunningham’s career when he met London-based photographer, David Montgomery. Stressing his own interest in the editorial side of the design industry, Cunningham could have never guessed that a few months later, Montgomery would come to New York with a small Olympus Pen-D half-frame camera as a gift. This seemingly insignificant, $35 item would launch Cunningham’s career not only as a photographer, but as an cultural visionary.

In 1968, Cunningham produced an innovative photo series titled ‘Facades‘, in which he dressed models in vintage clothing and posed them in juxtaposition to New York City’s historical landmarks. The photographs, many of which he donated to the New York Historical Society in 1976, echoed relevant social concerns about urbanism and cultural preservation. From there, he put himself on the map as a photographer to watch, defining a new age of street photography with his street fashion column in The Daily News. In 1970 he was employed by the Times, and never looked back. 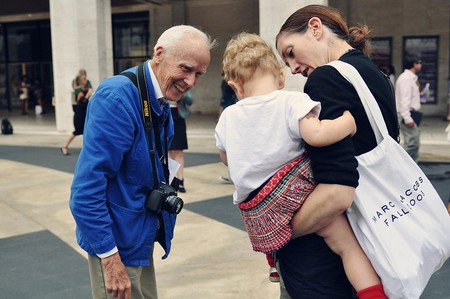 New York City now mourns the loss of a beloved artist, but as Dominican fashion designer Oscar De La Renta noted, “Mr. Cunningham’s work is the whole visual history of the last 40 or 50 years of New York.” Thus Cunningham leaves us not only with an astounding portfolio of stunning photographs, but with an invaluable and historical archive of fashion’s evolution in our city.