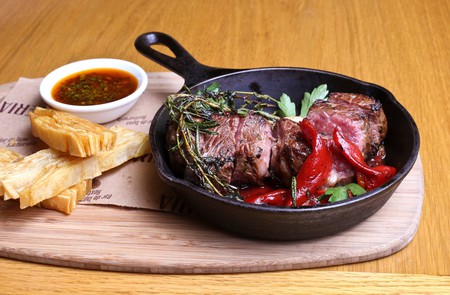 NYC is consistently graced with award winning restaurateurs intent on bringing the taste of the Iberian Peninsula to the city streets. Fusing the traditions of Spanish culinary culture with contemporary techniques and flavor combinations, tapas are increasingly popular in New York City. We profile10 outstanding Spanish and tapas restaurants to try. 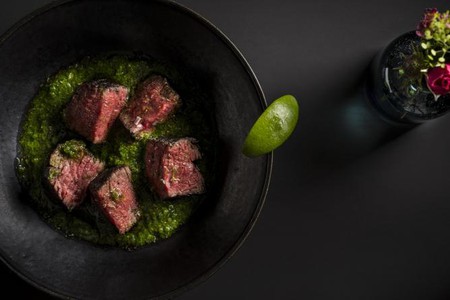 ABC Cocina is a contemporary and cosmopolitan spot, focused on a menu featuring the finest quality seasonal ingredients with artistry inspired by international culture. Chef Jean-Georges Vongerichten is particularly committed to promoting relationships with boutique producers and remaining holistically and environmentally minded. Serving inventive dishes as tapas, ABC Cocina uses this traditional Spanish dining experience as a platform to allow diners to share in new and creative flavors in a fun, sociable and relaxed atmosphere. Popular dishes include the octopus, sugar snap pea salad and their traditional tres leche cake for dessert. 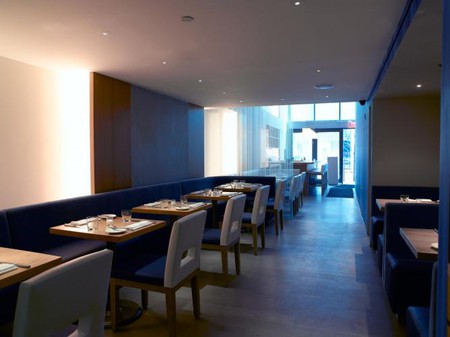 Michelin star Chef George Mendes opened Aldea’s doors in 2009, hoping to bring the traditions of the Iberian Peninsula and his own family’s heritage to Manhattan. Aldea, which translates to ‘village’ in Spanish, may be described then as a kind of community in itself, as Mendes welcomes his diners to sample rustic fare in its most refined form. If you’re lucky enough to sit at one of the highly coveted seats on the chef’s table (marked by a floating chandelier) you can see Mendes and his team at work. However, you won’t be disappointed with the elegant décor throughout the remainder of the restaurant. The menu consists of Portuguese-style tapas, including dishes such as gazpacho, alentejana (pickled rock shrimp, risa goat cheese, currants and gooseberries), arroz de pato (duck confit, chorizo, black olive, citrus purée, duck cracklings); and Giajunda mousse (toasted orange pound cake, banana brûlée, nutella powder and frozen Greek yogurt).

Boqueria aims to transport diners to the traditional cafés, tapas bars and market stalls in Barcelona. Diners can expect a lively Spanish atmosphere in both NYC locations, though it’s worth looking ahead as menus for the branches may not always be the same. Seasonal dishes can be ordered daily from the ‘market menu,’ showing off the best seasonal produce with a Spanish twist; otherwise, you will find all the classic Spanish tapas dishes you’d expect on the regular dinner menu. Sample the datiles con beicon – dates stuffed with almonds and Valdeon, wrapped in bacon – and the traditional churros with chocolate for dessert. 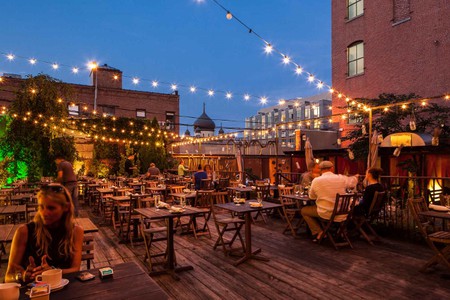 Image Courtesy of My Moon 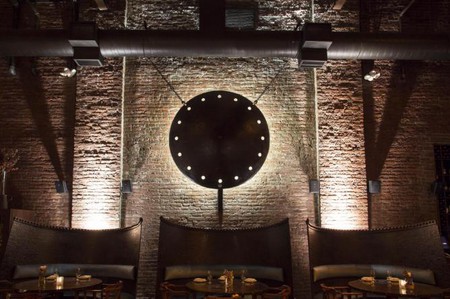 Image Courtesy of My Moon

Restaurant, Spanish, Vegetarian, $$$
Facebook
Email
Twitter
Pinterest
Copy link
Share
Map View
Located in a former boiler factory, My Moon gives this run down building in Brooklyn’s Williamsburg neighborhood a new lease of life. Working with many of the space’s old features such as exposed brick walls and abandoned boiler lids, My Moon exemplifies the commitment to regeneration in the area and provides a unique setting for its Mediterranean fare. Although My Moon is a small venue, its intimate layout is perfect for a romantic date night. Executive Chef Ivan Vilches builds his menu around the freshest and finest ingredients available, offering a variety of paellas and tapas options. 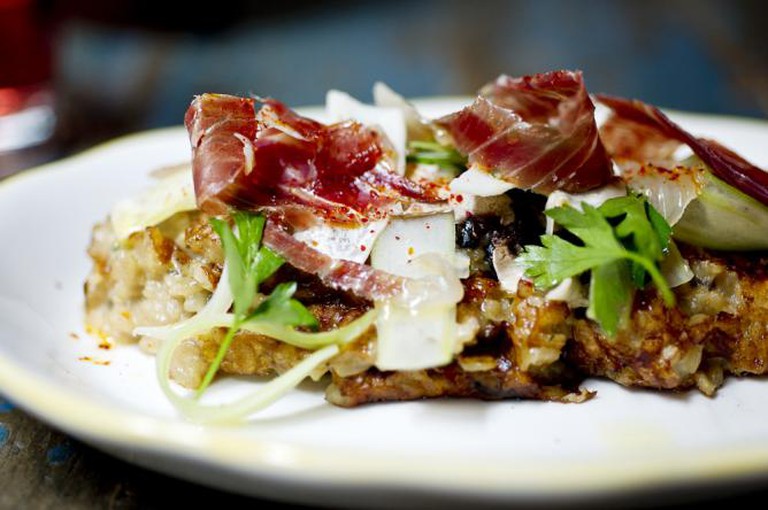 Tertulia, New York | © Evan Sung Photographer/Tertulia
Seamus Mullen, an award winning chef, opened Tertulia’s doors to rave reviews from both The New York Times and New York Magazine, achieving two and three star ratings, respectively. Mullen’s first ever solo project went from strength to strength as in 2013 Tertulia was named New York’s Best Restaurant by Citysearch. Designed by Jason Volenec Studio, the setting is warm and inviting with an open kitchen, wood-burning stove and wooden furnishings, fitting beautifully with the connotations of the name, which refers to a sociable gathering of friends enjoying intelligent conversation and delicious food. Inspired by the cuisine of the Asturias region, the menu promises simple dishes with top quality ingredients. Diners should sample the choclo, crispy hominy, pork belly, lime aoili, cilantro and chili from the tapas menu, and the coal-grilled, 40 day aged prime rib steak with romesco sauce and fingerling potatoes.

Restaurant, Spanish, Vegetarian, Vegan, Gluten-free, $$$
Facebook
Email
Twitter
Pinterest
Copy link
Share
Map View
To experience all the authentic flavors of Spain’s Basque Country in NYC, Txikito is a must try. Run by Basque Country native Eder Montero and his wife Alexandra Raij – who in her own right was awarded Eater’s New York Chef of The Year title – the pair have all the necessary qualifications to produce beautifully prepared, authentic Spanish cuisine. With seasonal specials everyday that closely follow the green market and local fishing boats you can be assured that every ingredient is the finest and freshest available. In the spring, summer and fall seasons don’t miss the mushroom dishes – delicious Oregon chanterelle and local king oyster mushrooms all used on the menu.
Give us feedback