New York City has plenty of bars but McSorley’s is certainly special. As one of New York’s oldest taverns, having existed since the 1800s, McSorley’s Ale House is an institution. Read on to find out more about its legacy and famous patrons. 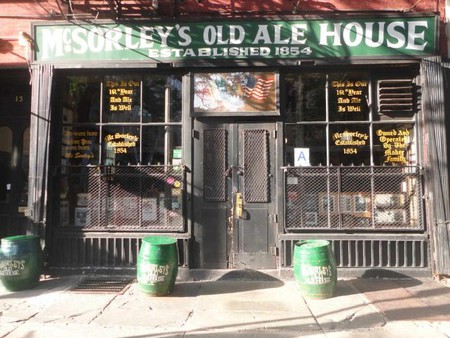 At 15 East 7th Street, located in the shadow of The Cooper Union is McSorley’s Old Ale House, an enduring remnant of the city’s rich culture, history, and the embodiment of the American dream. When John McSorley made his epic journey from Dublin, Ireland to New York with his wife Mary, he may have only imagined his tavern would become a hallmark of the city for the next 150 plus years.

In New York City, taverns come and go and few may stand the test of time. Some have occupied their lots longer than McSorley’s, like the Ear Inn at 326 Spring Street or Fraunces’ Tavern at 54 Pearl—one of the oldest remaining structures in Manhattan, dating as far back as 1785.

Yet few establishments will maintain their original spirit like McSorley’s saloon, a spirit, still carried forward and owned by the Maher family. Though its wooden walls and doors may be etched and notched by wear, its beauty and nostalgia endure in the smooth ale poured and the patrons who were there—lending truth to its motto, we have been here before you were born.

It rode the fervor of Abraham Lincoln’s historic Cooper Union Address delivered in New York City. They served the 16th president their signature brew, only to later lament the fateful news of his assassination in April of 1865. Strangely, Lincoln shares this similarity to JFK, who was also rumored to have tasted McSorley’s toasted lager.

McSorley’s, once prophetically named “The Old House at Home,” gave many New York doughboys their last taste of home before going off to the front lines of World War I. Their legacy remains in the number of wishbones still hanging above the bar, for those who failed to return could not make good on their promise to retrieve them. They hang from an iron chandelier above the bar forbidden to be touched. Yet Theodore Roosevelt might have witnessed as much, as his faded portrait overlooks the very place he once occupied during this time. 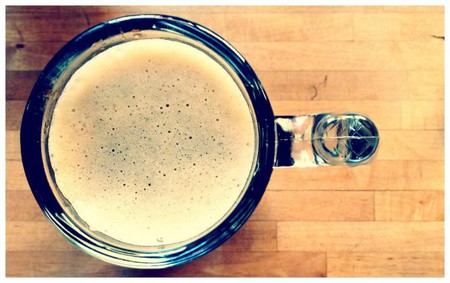 If these picture-filled walls had ears they might have heard, William “Boss” Tweed, the infamous New York politician and mogul of Tammany Hall, hatch his scheme to pilfer millions of taxpayer funds. Tweed likely still recalled the taste of McSorley’s ales from his New York Federal Prison cell, once standing at Ludlow and Broome Street where he died in 1878.

Fellow philanthropist and inventor of the first steam locomotive Peter Cooper frequented the Irish tavern, as well. Chances are Cooper sipped away his defeat to Samuel J. Tilden for the democratic nomination for president. Tilden might have pondered the same, when he lost that year’s election in 1876 to Rutherford B. Hayes.

McSorley’s is famed to be one of the last men’s only clubhouses. Yet from its ardent grip of the status quo, the tavern still stood on the cusp of social change—if only reluctantly so—by losing a case heard before the Supreme Court in 1970. McSorley’s was then forced to serve female patrons, and there is no doubt this forever changed the social bar scene in New York City.

The tavern’s sawdust-covered floors were shuffled at one time by folk singer and songwriter Woody Guthrie who wrote the iconic tune “This Land is Your Land.” McSorley’s also served journalist Hunter Stockton Thompson, writer and former member of the Irish Republican Army, Brendan Behan, and poet Paul Blackburn who moved to Greenwich Village with his mother at the age of 14.

At a time when many establishments in the south may have still served whites only, the historic tavern served African-American poet, drama, and music critic Everett LeRoi Jones who died January of last year. 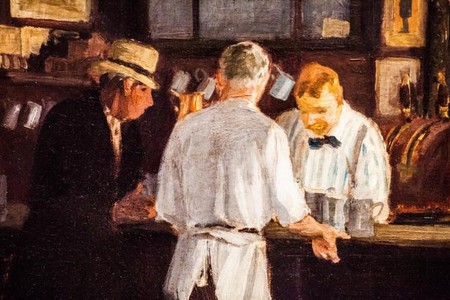 Some artists created their own tributes to the saloon, such E.E. Cummings who entitled his poem, “I was sitting in McSorley’s” and calling it “the ale, which never lets you grow old.” American painter John French Sloan immortalized the tavern in his 1912 work titled, “McSorley’s Bar.”

These folks left their imprint upon the world, and as if by some requited duty, McSorley’s agreed to become a keepsake to their contributions. This humble alcove is a hall of those we should not forget, such as a commemorative picture of firefighters who’d fallen on 9/11—some of whose helmets adorn a wall behind the bar.

Immediately apparent is the absence of any music still to this day. Risking to retain the traditional mediums of “conversation first,” it may have inadvertently birthed the truest grassroots of today’s social media. Had it not, McSorley’s may not have offered its own contribution to so many societal movements in literature, journalism, and drama.

So pull up a chair, and with your ale order up a plate of cheddar cheese, crackers, and raw onions (really). For your act of patronage may also, one day, be your entry into the annals of history and culture—as long as you heed their other time-honored motto: be good or be gone. 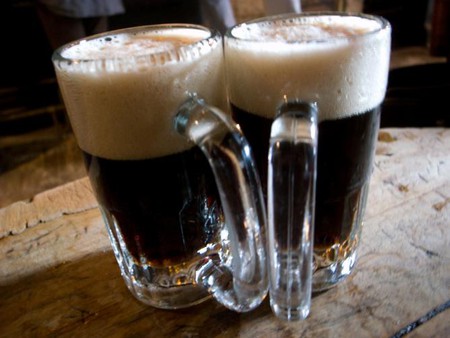