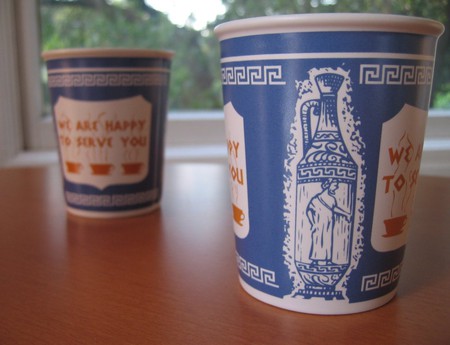 If you’ve ever snagged a dollar cup of coffee from a street cart or corner bodega—like most New Yorkers have—you’ve likely come into contact with one New York City icon: the Anthora cup. Instantly recognizable, the blue and white cup proclaiming its proprietor’s pleasure at doing business with you has become as quintessential to the city as the coffee it holds. Read on to discover how an everyday object became a world-famous symbol of New York City.

From classic yellow cabs to the comforting commands of automated subway announcers, many icons make up New York City. Here, even an ordinary cup of coffee is made extraordinary by its surroundings. In fact, only in New York City could one paper cup achieve worldwide recognition, reach millions in sales, and inspire a renowned institution (the Museum of Modern Art) to commission a likeness in its honor. Like many New York tales, the story behind the famous Anthora cup is almost too incredible to be believed.

This story began in 1963 when Greek immigrants dominated New York’s coffee shop industry, prompting one Sherri Cup Co. employee to conceive a cup to appeal specifically to Greek vendors. Czech immigrant Leslie Buck’s design drew upon Ancient Greek symbolism, featuring an amphora, or ceramic vessel, and the words ‘WE ARE HAPPY TO SERVE YOU’ emblazoned in an angular font. Designed in blue and white, the colors of the Greek flag, the Anthora was a smash success with its target consumers, as well as audiences Buck never dreamed of.

always get hyped when I see my coffee served in these cups. have a nice day everyone // #anthora

Once the Anthora hit the stands, it achieved its status as the definitive symbol of New York coffee culture almost immediately. Iconic television series, such as Law & Order and Friends, have featured cameos of Buck’s creation, while copycat designs continue to flood the market. At the height of its popularity in 1994, the Anthora reached 500 million in sales, making it the most popular product in the company’s history. After Solo Cup Company had absorbed Sherri, sales decreased, and in 2006, the company discontinued the Anthora, turning a once-ubiquitous object into a relic. When Buck passed away just four years later at 87 years old, it seemed as if a local legend had died with him.

For the non #newyork area people, this cup has been iconic in #nyc since the 1960's. It originated in Greek owned coffee shops and then spread further around the NYC area. #wearehappytoserveyou #greek #anthora #goodmorning #coffee #bokeh #iloveny

Then, slowly, the Anthora began to reappear—sort of. The cup’s likeness was reproduced on everything from coin purses to watches, even making an appearance on ceramic mugs commissioned by the Museum of Modern Art itself. With interest in the cup, thus, renewed, nostalgic New Yorkers inundated the Dart Container Corporation, the current owners of the cup’s design, with requests to re-release Buck’s creation. Finally, after a nine-year hiatus, the Anthora hit shelves once again, thus, bringing a New York City treasure back home.