Ellsworth Kelly: The Man Behind Shape, Form And Color 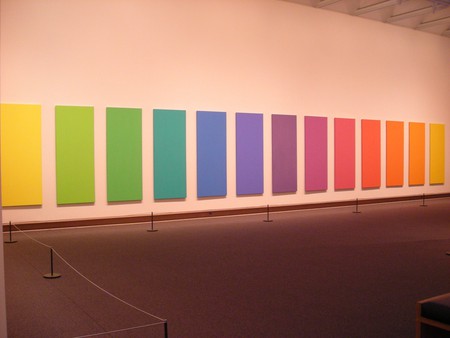 New York-born artist Ellsworth Kelly was a painter, sculptor, and printmaker known especially for creating single or multiple panels: rectangular, curved or square. Kelly rose to fame during the post-war art world as one of the first artists to create irregularly shaped canvases. His bright, multi-paneled, largely monochromatic canvases did not adhere to any one artistic movement, and therefore highly influenced the development of Minimalism, Color Field, Hard-edge painting and Pop Art.

Ellsworth Kelly was born in Newburgh, New York and grew up in northern New Jersey, where he spent much of his time observing nature. This would later inform his unique perspective on the art world. In 1943, Kelly enlisted in the army serving in France, England and Germany. His highly visual experiences with camouflage and shadows shaped Kelly’s aesthetic and future career.

After Kelly returned to America in 1954, he found the art world hard to break into. Kelly had his first exhibition at Betty Parsons’ Gallery, but wasn’t too popular, as he was considered more of a European artist. In May of 1949, while Kelly was still in Paris, he had begun to paint his first abstract paintings. In his famous painting Red Blue Green, the bold red and blue shapes contrast and resonate with the solid green background. Tensions between the ‘figure’ and the ‘ground’ were of great significance in his work, as he aimed to establish dynamism within otherwise flat surfaces. Another painting titled Colors for a Large Wall (1951) introduced his view of paintings as objects, where the painting was comprised of many smaller objects (panels) that just happened to collide. 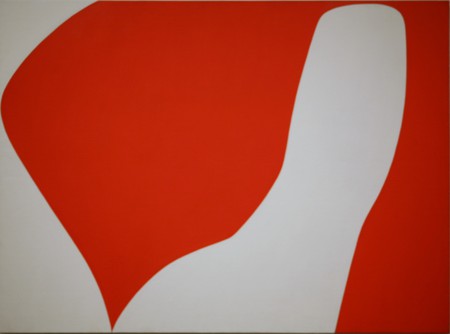 In addition to paintings, Kelly also began drawing plants and flowers in the late 1940s. These drawings depicted contours of leaves, stems and flowers in clean strokes of pen or pencil and centered on the page. While living in Paris, he became inspired by the likes of Henri Matisse and Jean Arp, while also experimenting with reductive geometry in paint and wood. During the mid-1960s, Kelly took up printmaking and produced his Suite of Twenty-Seven Lithographs (1964-66) with Maeght Éditeur in Paris. 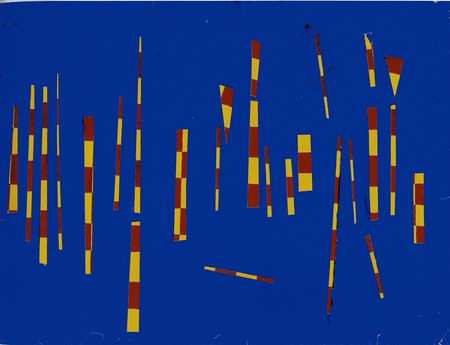 Although Kelly was best-known for his paintings, he also worked with sculpture throughout his career. One of Kelly’s first wood sculptures, Concorde Relief I (1958) reveals the balance between two rectangular forms layered on top of each other. Kelly would often create his pieces using a succession of ideas on various forms. For example, he would start off with a drawing, which would then be enhanced to create a print. After the print, Kelly would create a freestanding piece that would later be turned into a sculpture. 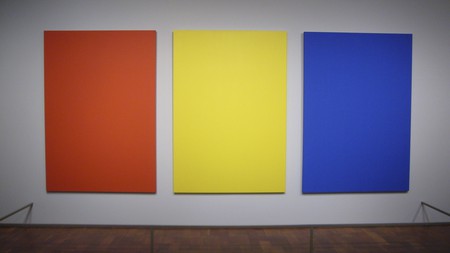 Recently, Kelly organized a show of Matisse drawings at the Mount Holyoke College Art Museum in Massachusetts. Even more recently, he curated Monet/Kelly at the Clark Art Institute. For more than six decades, Ellsworth Kelly has focused on the visual elements of form, color, and scale. You can view his work at The Tate Modern in London, which is open to the public everyday. One piece of his work you will find on display is called Orange Relief with Green. This large, asymmetrical abstract painting is made up of two canvases: one in bright orange and the other in bright green. The panels in the work are seen as challenging the traditional figure: the subject is set against the background, which is visible by means of contrast. Several other pieces on display include famous works such as Black Square with Blue and White Curve. 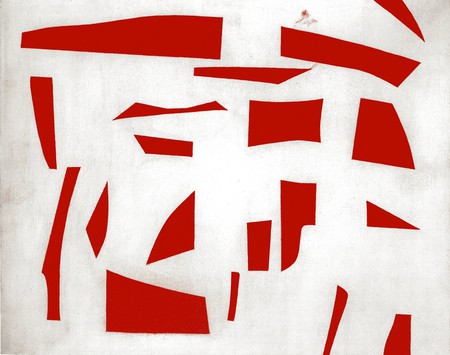 Some may think that Kelly’s work is too simple, but that is what makes it interesting. It is what lies between the lines, shadows, reflection, as well as the colors and shapes that occupy the space that have piqued the interest of art lovers around the world.

On December 27, 2015, Ellsworth Kelly passed away at the age of 92 in his home in Spencertown, New York.