The 10 Best Hotels in the Financial District, New York 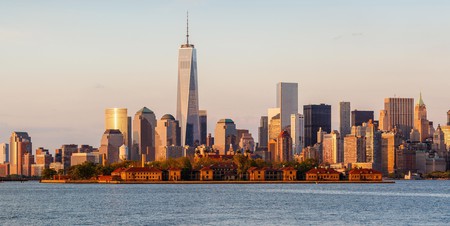 New York City’s Financial District is an area rich with history, where travelers can still experience a touch of the old world among the “new downtown.” Whether visiting for business or pleasure, a stay at one of these hotels provides the best way to experience what Downtown Manhattan has to offer.

Sitting at the lower tip of Manhattan, the Financial District encompasses Wall Street and some of the city’s tallest and most distinguishable skyscrapers. But beyond the bustle and unobstructed views of Lady Liberty in all of her glory, there’s a whole host of exciting bars, restaurants and other attractions. Culture Trip has picked out the best hotels in the Financial District to ensure you make the most of it all. 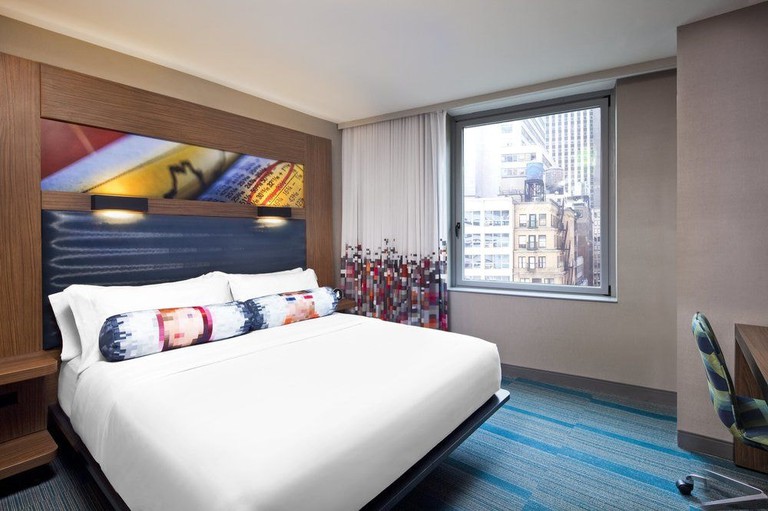 Flashier and more playful than most options in the Financial District, Aloft Downtown is a destination for people looking to party, with a pool table in the lobby lounge and a snack bar to refuel at any hour of the day or night. The hotel hosts weekly karaoke nights, and a DJ spins at the bar every other Friday evening. Kids are welcomed with “Camp Aloft,” which includes a sleeping bag plus extra treats to entertain your child while you map out the next part of your downtown adventure. 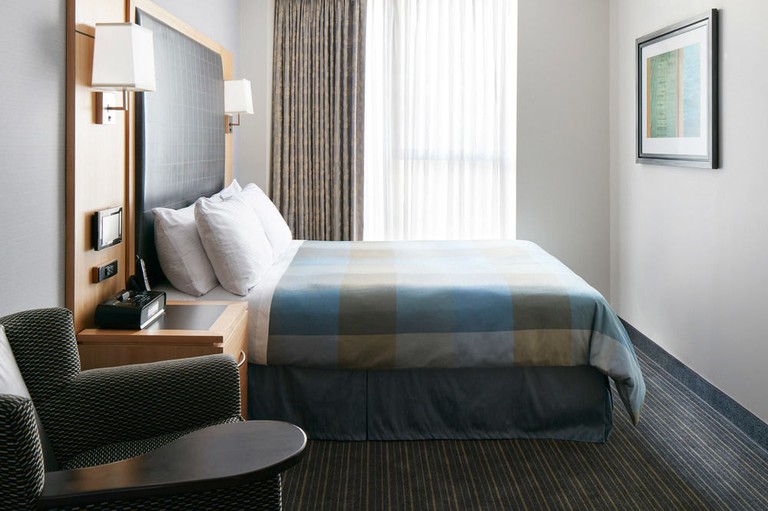 Geared towards working travelers, the World Center Hotel offers rooms that are clean and modest. The crown jewel of the hotel is its World Terrace Private Dining Club on the 20th floor, to which guests have exclusive access. So, kick back on the private terrace, and enjoy the sparkling views of the One World Trade Center and its surroundings. 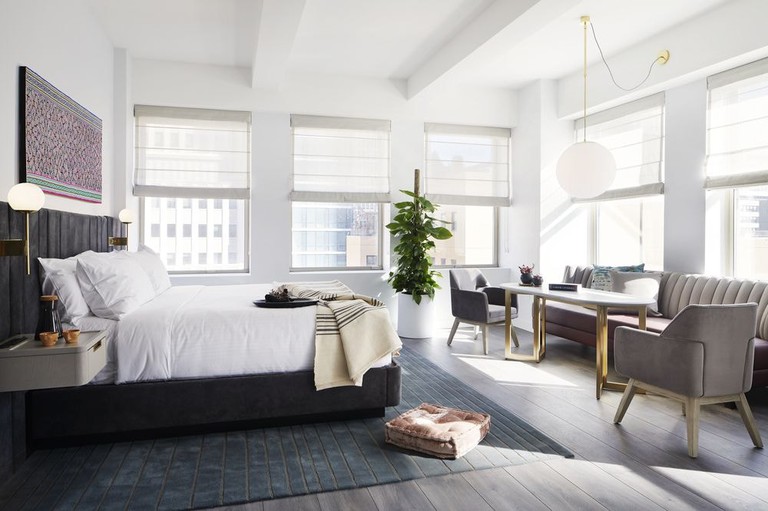 Before entering through the moss-covered tunnel that leads to the reception area of The Assemblage, you’ll be invited to press an electric gong that chimes in time with your heartbeat. It’s all part of the experience – and the hotel’s ultimate aim to remove you from the chaos of the outside world and welcome you into an oasis of calm. All of this precedes an apparent focus on health and wellness. Alcohol is a no-go, and all the food served at the in-house and aptly named Plant Cafe is, as you might have expected, 100 percent plant-based. Each Art Deco-inspired room comes with a lot of space and a kitchen, making it feel more like a self-catering apartment. Also, plenty of greenery ensures the natural themes from downstairs are carried throughout. 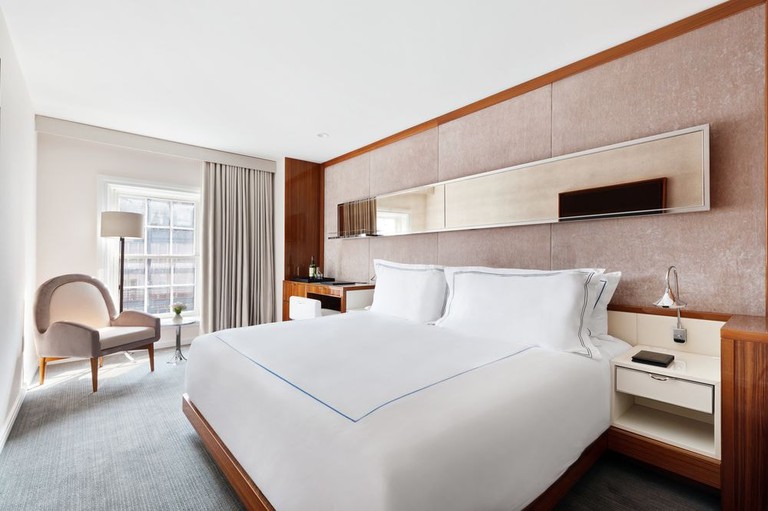 The Cipriani family opened Mr C Seaport at the South Street Seaport in the Financial District in July 2018. Located in an English-style red-brick building among the cobblestones of the Seaport, Mr C offers tastefully decorated guest rooms with stunning panoramic views of the East River and Brooklyn Bridge, while the on-site restaurant, Bellini, serves rustic Italian cuisine.

The Wagner at the Battery 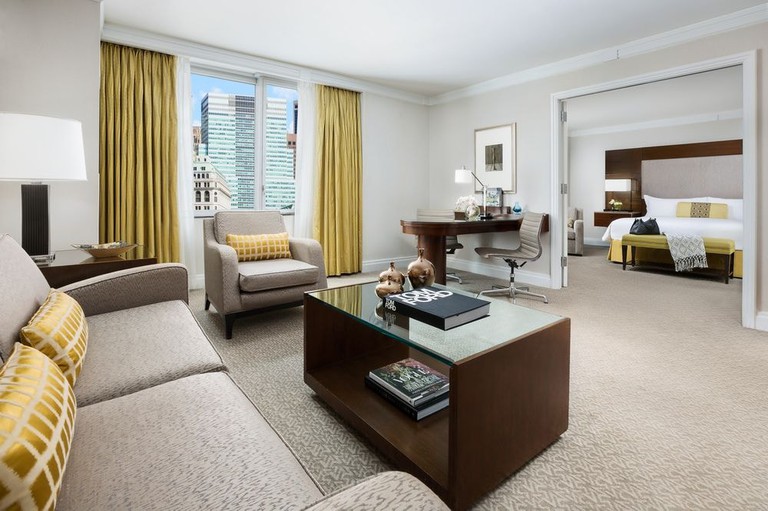 Courtesy of The Wagner at the Battery / Expedia

Flanking the banks of Lower Manhattan, The Wagner at the Battery offers views of the Statue of Liberty and New York Harbor from its large guest rooms. An all-suite hotel catering to business travelers, it’s well-appointed with writing desks in every room and ideally located for exploring the Financial District in your downtime. The ferry is just a stone’s throw away, and you’re only a short stroll from the waterfront Battery Park – the green space at the bottom of this concrete-dominated island. The Wagner is one of only a few downtown hotels with valet parking service – a rare perk if you’re driving.

The Beekman, A Thompson Hotel 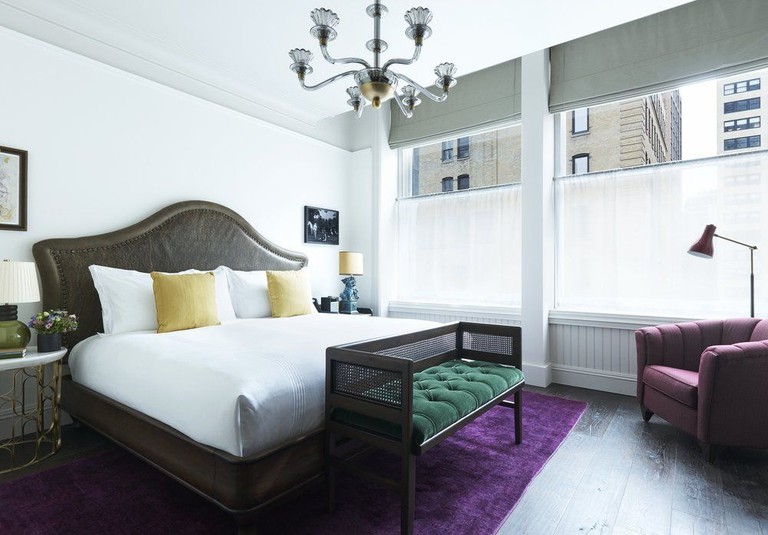 Courtesy of The Beekman / Hotels.com

Built in 1883, The Beekman is housed inside one of Manhattan’s original skyscrapers. Now a city landmark, the hotel restored the building’s ornate Victorian wrought-iron railings in its nine-story atrium, which makes for a truly spectacular entrance. The reception desk is draped with Persian rugs, and rooms are adorned with similarly eclectic furnishings from around the globe. Top Chef’s Tom Colicchio is responsible for the fine food offerings at on-site restaurant Temple Court and the underground speakeasy, Alley Cat. Also, an incredible art collection honoring the Financial District’s past and present, complete with site-specific works by Jane Hammond and Patrick Jacobs, is on view throughout the hotel. 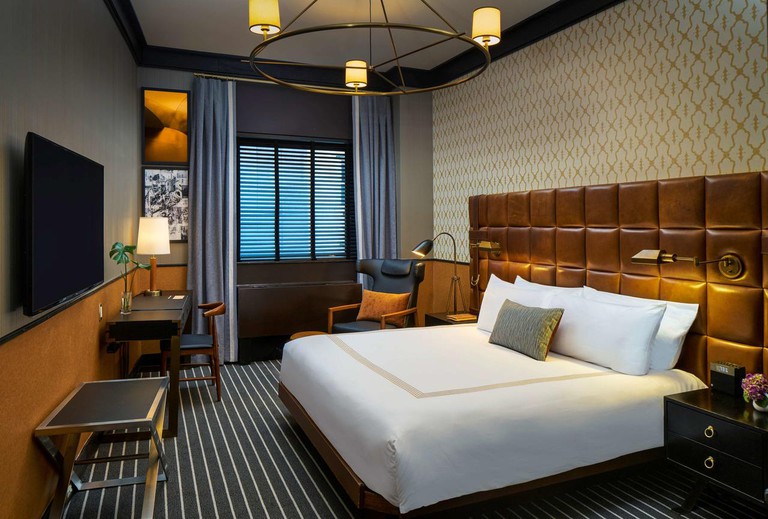 This handsome red-brick hotel sits snugly among the surrounding sleek skyscrapers. You might not get the same sweeping views as these neighboring towers, but you will benefit from an enormous room featuring deep-colored leather furnishings, mahogany touches and brass fittings. The bachelor-pad feel makes for an interesting contrast with in-house restaurant Felice Ristorante, which serves up a Tuscany-inspired menu of classic dishes such as veal ragu bolognese and chicken milanese. Next door, cozy wine bar La Soffitta is the perfect place for a candlelit glass of Italian wine. Saluti! 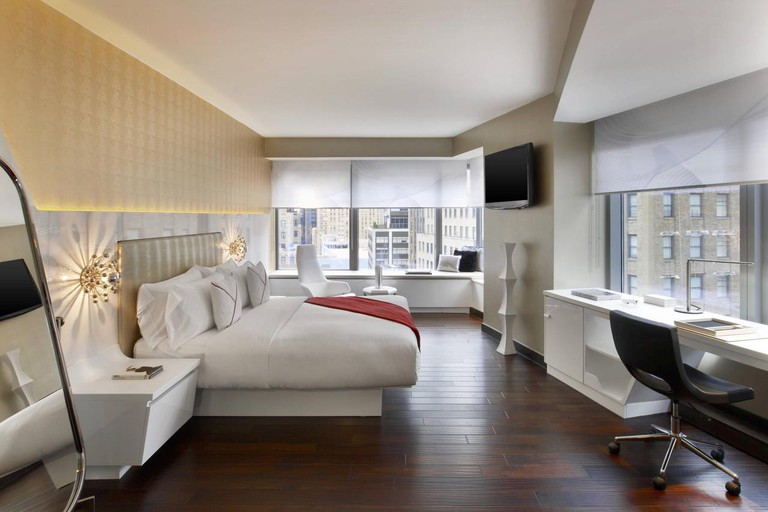 The neon-lit W New York Downtown loudly projects itself out into the Financial District in a manner that’s quite clearly at odds with the otherwise business-focused surroundings of this area of Manhattan. Boasting a youthful brand of revelry, the hotel is best known for its fifth-floor bar and terrace that’s illuminated by a wave of LED lights on the inside and bathed in a fuchsia glow on the outside. It’s a glittering and lofty spot to toast the Big Apple – although the sleek and modernist rooms offer similar far-ranging views if you want to avoid the winter chill. 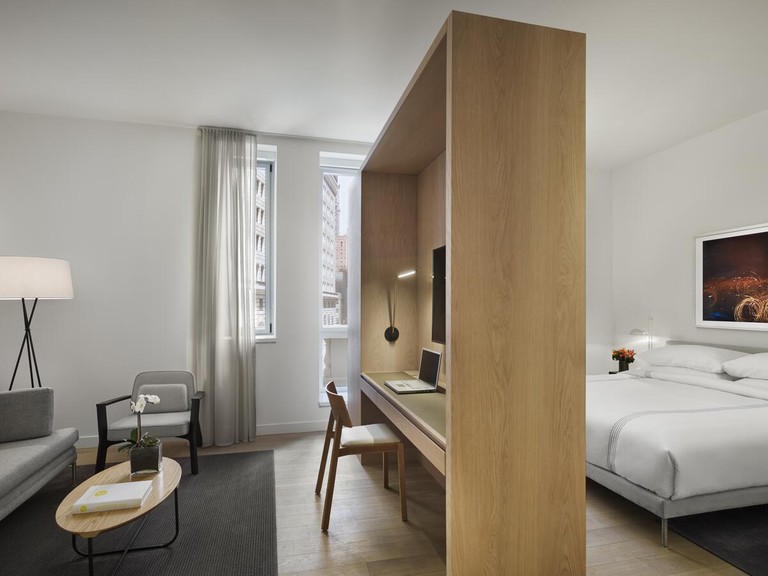 Courtesy of AKA Wall Street / Expedia.com

Set among the hyper-modern skyscrapers of the Financial District, this pre-war high-rise may seem a little incongruous from the outside. However, once inside, the hotel feels quintessentially NYC – with loft-style rooms, mid-century Scandinavian-style furnishings plus a large and sparse lobby. Every room comes with a fully equipped kitchen, creating a homey feel and the means for preparing a meal with ingredients purchased from the nearest market. The modern American menu of in-house restaurant Blue Ribbon Federal Grill may tempt you though, while after-dinner drinks are best cradled on the roof terrace during an outdoor movie screening, with the twinkling city lights providing the backdrop. 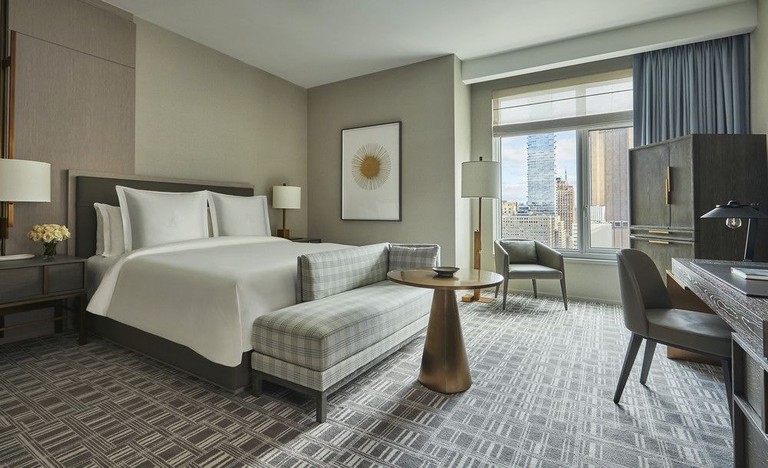 There’s a reason the Four Seasons brand is synonymous with luxury. The hotel chain specializes in impeccably kept rooms, excellent customer service and top-notch facilities that never fall short of the mark. You can expect all of this at the Downtown NYC location. Work off some steam at the fitness center or with laps in the glistening indoor pool – you’ll want to build up an appetite for Wolfgang Puck’s restaurant, CUT, downstairs. The kitchen focuses on meat, with Japanese wagyu and New York sirloin the main standouts on a mouthwatering menu. It’s open for breakfast, lunch and dinner, making it a top spot to refuel at any time of the day.

This article is an updated version of a story created by Christine Kandic Torres.