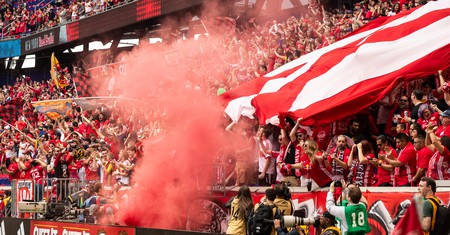 Win, lose or draw, they’ll cheer for their club. Rain, heat or snow, they’ll be in the stands. New York City has 11 professional sports teams, many with their own fan groups. These are some of the most devoted.

A group of people approach the subway platform. Many are wearing the sky-blue jersey of New York City Football Club, the Big Apple’s newest professional soccer franchise. Scarves are emphatically waved in the air. Drums are proudly beaten. “NYC! NYC! We are NYCFC! From the Bronx all the way down to the Battery! We are NYCFC!”

Like many other professional sports teams, NYCFC boasts diehard fans. Here are the groups that are the lifeblood of the New York City sports scene.

The Bleacher Creatures are a group of passionate baseball fans who, as their name suggests, sit in the bleachers at Yankee Stadium.

The group’s beginnings are attributed to Ali Ramirez, who rang a cowbell to encourage more fans to cheer during games in the 1980s and ’90s. In 1996, New York Daily News columnist Filip Bondy was tasked with writing a story from Yankees fans’ perspective, so after immersing himself with “the most rabid, passionate fans and [taking] on their persona” he penned the piece under the pseudonym “the Bleacher Creature,” and the name stuck.

Initially occupying Sections 37 and 39 of the bleachers in the original Yankee Stadium, the Bleacher Creatures relocated to Section 203 when the new stadium opened in 2009. Led by “Bald” Vinny Milano, they are known for their pregame roll call, in which they chant for every player in the Yankees’ starting lineup, eliciting acknowledgement from each before moving on to the next one.

Find them at: Billy’s Sports Bar across from the stadium on River Avenue.

You can find the New York Mets’ legion, The 7 Line Army, in the outfield seats at Citi Field. Darren Meenan, founder of Mets-themed apparel company The 7 Line, started the group in 2012; the name pays homage to the subway line that runs from Manhattan to Citi Field in Flushing, Queens.

The 7 Line Army isn’t limited to Citi Field; the group hit the road for the first time in 2013, visiting opposing stadiums including Wrigley Field in Chicago. Since then, they’ve traveled to 16 of the 30 major-league stadiums to date; for some away games, Meenan’s batch of 1,000-plus tickets sells out in under an hour. The 7 Line Army bills itself as the largest traveling supporter section in Major League Baseball history.

“I cannot thank you enough for the support over the years,” former Mets captain David Wright said in a heartfelt message to the 7 Line Army. “When you guys invade the away ballparks or when you guys fill the outfield at Citi Field it means the world to us as players. I know we don’t always get the opportunity to say ‘Thank you,’ but I wanted to take a quick minute and let you know how much we appreciate it.”

Find them: Tailgating before home games at the Marina Lot.

Major League Soccer finally found its way to New York City in 2013 with the announcement of the New York City Football Club, and soccer fans quickly fell in line with the creation of its first supporters group, the Third Rail.

Initially known as New York City FC Supporters Group, they changed their name to the Third Rail following a vote on May 21, 2014. The name is inspired by the source that powers trains throughout the New York City Subway system: Train wheels run on two parallel tracks, and an electrified third rail running alongside provides the power. The group’s website states: “We want to be the electricity that powers New York City FC, from the organization to the players on the pitch.”

Find them at: The Dugout across from the Stadium on River Avenue.

The Empire Supporters Club (ESC) is the oldest supporters club in Major League Soccer, dating back to 1995. The club’s name honors the franchise’s original eponymous title, though the team debuted as the New York/New Jersey MetroStars for the inaugural MLS season in 1996.

The ESC followed the MetroStars, known as the New York Red Bulls since 2006, from their old home at the now demolished Giants Stadium in 2010 to Red Bull Arena in Harrison, New Jersey, and can be found in the South Ward of the stadium, particularly Section 101.

Find them: Tailgating outside Red Bull Arena in the lot by the Panasonic building. For away matches, they have viewing parties at The Football Factory at Legends.

After the Coliseum was closed for renovations in 2015, the Islanders sought temporary refuge at Barclays Center in Brooklyn and the Blue and Orange Army followed, staking their claim in Sections 228 and 229.

Today, the team splits its time between both venues – the Coliseum now rebranded as NYCB LIVE – and the Blue and Orange Army are with them every step of the way. The organization proudly welcomes any and all Islanders fans who want to join in chanting from the rafters.

Find them at: McMahon’s Public House before games at Barclays Center.