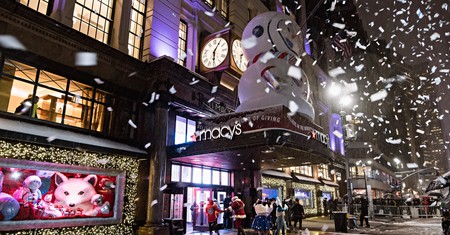 A trip to New York City during the holidays is hardly complete without a stop to view the many department-store windows decked out with seasonal installations. Here, a look at how this beloved tradition became part of the holiday season.

In New York City, the holiday season signifies the arrival of a 72-foot (22 meters) Christmas tree in Rockefeller Center, mugs of hot chocolate sandwiched between mitten-clad hands, and the city’s many department-store windows’ transformation into flashy holiday-themed installations and edgy, avant-garde art exhibits. 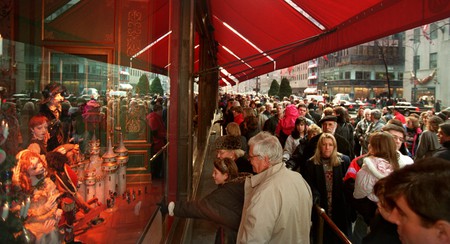 Mandatory Credit: Photo by Ed Bailey/AP/REX/Shutterstock (6493817a) Tourists and pedestrians crowd the sidewalks in front of New York's Saks Fifth Avenue, where the department store's windows add to the city's allure during the holidays. In his book ''Christmas in New York'' Daniel Pool says New York offers "a good deal of beauty, some wondrous razzle dazzle and, sometimes all but buried underneath it all, perhaps too, a good deal of holiday feeling CHRISTMAS CRUSH, NEW YORK, USA | © Ed Bailey/AP/REX/Shutterstock

This annual tradition has long been an inherent part of the holiday season. Every year, lengthy lines snake along Fifth Avenue and beyond, filled with tourists and locals waiting to view the animatronics at Macy’s or the crystal-garnished sculptures at Bergdorf Goodman. 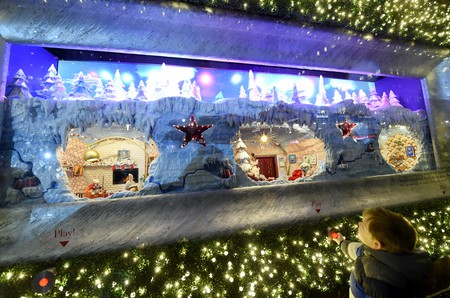 But while many department stores take part in the tradition these days, Macy’s claims to have been the first to devise the intricately adorned holiday windows. In the second half of the 19th century, department stores began employing their first-floor windows as modern advertisements, showcasing their products. But it wasn’t until 1874, when RH Macy (Macy’s owner at the time) strung together an assortment of porcelain dolls posed in scenes from Harriet Beecher Stowe’s Uncle Tom’s Cabin, that the NYC holiday windows were born. 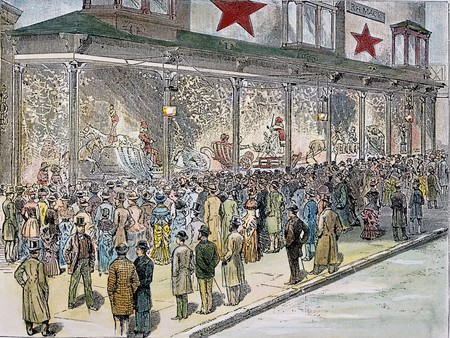 Crowds At Macy's, 1884 at Sixth Avenue And 14th Street In New York, viewing the spectacularly decorated windows at the height of the Christmas shopping season. American Engraving, 1884. | © Granger/REX/Shutterstock

At the turn of the century, department stores in several US cities amped up window displays in an attempt to charm window shoppers into actually coming into the store. These tactics proved successful, especially during the holiday season when stores cranked it up a notch, transforming windows once simply reserved for stores’ wares into more intricate installations that had less to do with advertising and more to do with crafting something purely decorative. 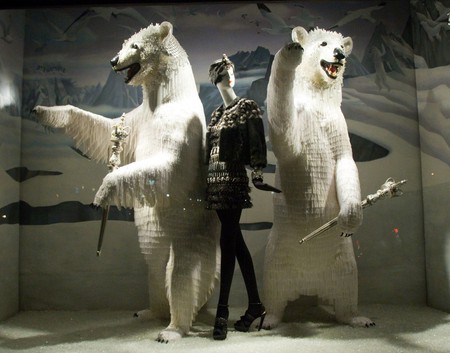 Nowadays, New York’s famed department stores – from Macy’s to Barneys to Saks and Bloomingdale’s – carry on this tradition. Macy’s remains the most famous, often frequented the most by tourists and families; during peak hours, nearly 10,000 people each day will pass by Macy’s holiday windows, making it arguably the leading tourist stop of the season. According to Roya Sullivan, Macy’s national director of window presentation, it takes almost a year to plan the holiday windows, with 200 team members being involved. Sullivan leads the charge for Macy’s six ever-revolving displays that wrap around 34th Street every year. 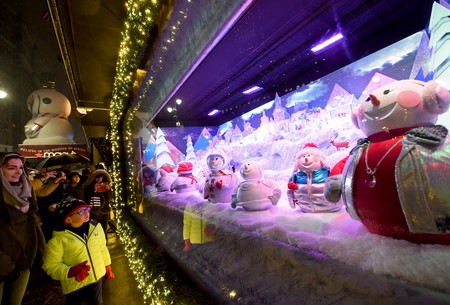 The legendary Christmas windows celebrating the theme "Believe In The Wonder Of Giving" at Macy's Herald Square in New York. The six enchanted windows share a tale of friendship, family, adventure, and teamwork as Sunny the Snowpal works to save Christmas with the help of her friends. | © Diane Bondareff/AP Images for Macy's

Here, the windows brim with sculptures (which in the past have included the Peanuts gang, plenty of reindeer and Santa), animatronics, a dusting of snow and even a custom interactive video game. Sullivan explains that every year her team is tasked with telling a story through the windows. The process is not unlike staging a play, she says. The story in 2018 centers on Sunny the Snowpal, who works to save Christmas with the help of her friends. 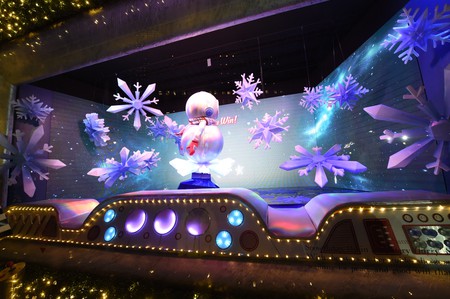 Macy’s certainly centers the windows around the holidays, but not every department store is doused with holiday themes. The windows at Barneys are designed by different artists every year. In years past, windows have included an ice skater gliding across a small block of ice and psychedelic 1960s-inspired sculptures. Saks Fifth Avenue projects a fairytale light show across the entire facade of the building several times an hour after the sun sets. Bergdorf Goodman’s tall and narrow windows brim with cotton-candy-clad mannequins and sculptures donning sparkling dresses. 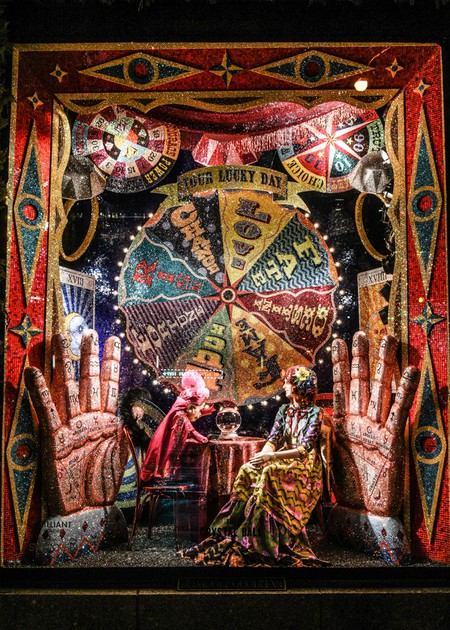 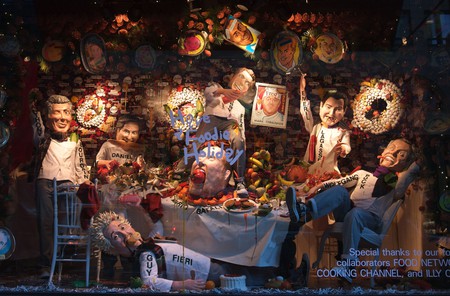 A lot has changed for New York City’s holiday windows since Macy’s first designed its humble displays in the 19th century. Each year the artistry becomes more festive and the themes more challenging and inspiring. One thing that doesn’t change is the crowds, which are massive as always. 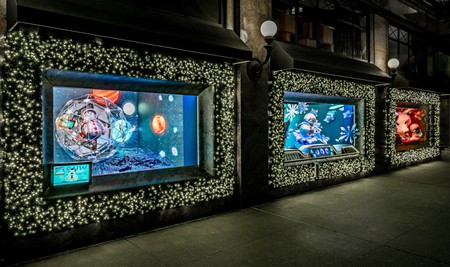