6 NYC Slam Poets You Should Know 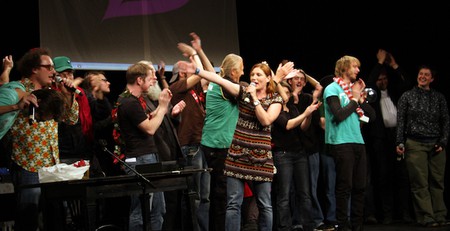 Slam poets have a special way with words, which like a song, sums up all of our feelings in a matter of a few stanzas. A good poet can take us through an array of emotions in just a few minutes. These NYC-based seven poets do just that — when they speak, you feel every word that is said. They leave everything at the microphone and are not afraid to tackle issues that truly matter in the world. We profile seven of New York City’s best slam poets.

A Haitian-American raised in the Upper West Side, Carvens Lissaint has won numerous accolades in slam poetry since 2006. It was due to this that he became known in the tri-state area for his poetry; he solidified this notion by winning the New York Knicks Poetry Slam in 2007. In 2008, Lissaint spent most of the time on slam teams such as the 2008 Newark, NJ Slam and winning the Global Grand Slam (2009) and the Robert Bedford Speak Green (2009). Lissaint also coached the New York University Collegiate Slam team as well as co-coaching the Urban Word NYC team in 2010. Lissaint hopes ‘to share his light and become a better being of the universe.’

Mahogany L. Browne balances many titles; she is a writer, activist, educator, and curator. Her poems cover topics on the black experience. She is an author of several books and articles and has had her journalistic work published in magazines like Uptown, King, XXL, The Source, Canada’s The Word, and UK’s Mobo. Her poetry has been published in the Manhattanville Review, Muzzle, Union Station Mag, Literary Bohemian, Bestiary Brown Girl Love, and Up the Staircase. She is an NYC Urban Word mentor and has been seen on HBO’s Brave New Voices. Browne facilitates writing workshops across the country, is a publisher for Penmanship Books, which is a small press for performance artists, and is the program director for the Nuyorican Poets Café Friday Night Slam. Currently, she is a MFA candidate at the Pratt Institute, focusing on writing and activism. Check out her poems here.

A New York City resident via Teaneck, New Jersey, Miles Hodges is a seasoned slam poet, having performed at a long list of big-name venues from The Nuyorican Poets Café to the Apollo Theatre, the Brooklyn Academy of Music, The Smithsonian Museum, and the Kennedy Center in Washington, D.C. The former Youth Slam Champion was featured on Russell Simmons 2008 HBO documentary Brave New Voices. He can also be seen on the second and third seasons of Verses and Flow. His work has been published in academia curriculums and accessed by over one million online users. Hodges has also taken his art global by visiting places like New Delhi, India and helping out with the relief efforts in Haiti. Currently, he is studying at the University of Pennsylvania. He plans on continuing to create more poems as long as he has a ‘good cup of coffee and some James Baldwin.’

A native from Yonkers, NY, this performance poet has graced the stage in places such as The Sundance Film Festival, The NAACP Image Awards, The Clinton Global Citizen Awards, and President Obama’s Evening of Poetry and Music at the White House. The work of Joshua Bennett has also been published in numerous publications such as Drunken Boat, Muzzle, Poetry Northeast, Disability Studies Quarterly, and Clarion. Bennett graduated from the University of Pennsylvania with honors that included Phi Beta Kappa and Magna Cum Laude and with a double major in English and Africana Studies. He is currently in his third year at Princeton University as a doctoral candidate in the English department, with a primary focus on black studies, disability studies, and ecocriticism.

Joel Francois is a 24-year-old Haitian-born, Brooklyn-raised creative writing major at Brooklyn College. He is currently a member of the Nuyorican Slam team and is also their 2015 Grand Slam winner. Apart from the Nuyorican, Francois also performs with the Brooklyn College Slam Team, traveling nationally with them to compete. His hope is that by reciting poetry not only will he help people come to terms with their truth as well as listen to his but also, hopefully, ‘changing his life as well as others, one stage at a time.’ Check out his poem ‘Interchangeable Parts’ below.

A Brooklyn resident, Anthony Ragler performed his poem ‘Target’ at the National Poetry Slam in 2014. This poem reiterates the notion of people of color constantly being ‘targets’ when about in the general public. In the poem, Ragler mentions ‘the white people look at us on the train like we are rambunctious bullets,’ which is relevant to today’s conundrums as a whole. He is a beacon of today’s young people who is trying (like everyone is) to make sense of the actions put forth by white people and the black community. Aside from the National Poetry Slam, he has made appearances at the infamous Nuyorican Poetry Café in Manhattan, NY. If you want to see more of Anthony’s poem, check it out below.

Kaycia is a homebody to the fullest but enjoys venturing out and around Brooklyn and reading in her spare time. She dreams to one day travel to different places like Toronto, Australia, and South Korea. Follow her on Twitter @KSailsman.