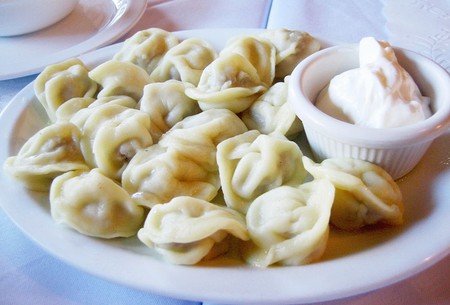 One of the greatest things about New York City is the incredible diversity of the population. There are people from every country around the world here, and over time they’ve established themselves in different neighborhoods. While there are Russians and other Eastern European populations in various neighborhoods in NYC, currently the largest group is in Brighton Beach, Brooklyn. It’s a trek from Manhattan, and once you arrive you’ll feel a world away. English is not prominent, there’s a beach and a boardwalk, and it’s hard to find a hot dog stand. You feel like you’ve travelled across the world simply by riding the subway, and if you’re in the area, you can’t miss the Russian food. Here are some of our favorite places to get it.

Cafe At Your Mother In Law

Cafe, Restaurant, Russian, Korean
Facebook
Email
Twitter
Pinterest
Copy link
Share
Map View
Thought it may sound strange, Cafe at Your Mother In Law serves Russian, Uzbek, and Korean food. When you consider history, however, this isn’t so crazy, because in the 1930s Stalin moved the Korean population in Eastern Russia to Uzbekistan and Kazakhstan. Now there is a decent-sized population of Koreans who speak Russian, and one of them owns this cafe in Brighton Beach. The sign outside reads ‘Elza Fancy Food Corp’, and inside you’ll find Eastern European dishes, Korean dishes, and a few that blend the two flavors.
Open In Google Maps
3071 Brighton 4th Street, Brighton Beach, Brooklyn New York, 11235, USA
Give us feedback

Restaurant, Russian, $$$
Facebook
Email
Twitter
Pinterest
Copy link
Share
Map View
For a classic Russian restaurant with opulent interiors and live music, head to Skovorodka. Here you can try Soviet classics, from katchapuri(a Georgian flatbread) to chicken tabaka –a delicious fried chicken. Or go for Russian pelmeni(a lamb dumpling) or ‘potatoes and mushrooms’, a bland-sounding dish that’s actually one of the most flavorful things on the menu. And don’t skip the pickle plate, an impressive spread that’s sure to include things you never knew could be pickled.
Open In Google Maps
615 Brighton Beach Avenue, Brighton Beach, Brooklyn New York, 11235, USA
+17186153096
Visit Website
Give us feedback

Restaurant, Russian, European, $$$
Facebook
Email
Twitter
Pinterest
Copy link
Share
Map View
The Russian nightclubs you may have heard about have dwindled in Brighton Beach, but Tatiana is one of the few that remain. It’s located right on the Brighton Beach Boardwalk, and its burgundy carpet, marble paneling, and extensive sushi menu remind you that this place is about glamour. Despite this, the best thing to do is sit outside on the boardwalk and enjoy decadent versions of classic Eastern European dishes.
Open In Google Maps
3152 Brighton 6th Street, Brighton Beach, Brooklyn New York, 11235, USA
+17188915151
Visit Website
Give us feedback

Restaurant, Russian, $$$
Facebook
Email
Twitter
Pinterest
Copy link
Share
Map View
Homey and simple, Ocean View Cafe is delicious and casual. Here, stick with the basics. The pelmeni is delicious, the blintzes shouldn’t be missed, the borscht and beef stroganoff are great, and if you’re feeling adventurous try the eggplant and caviar. Ocean View Cafe feels strangely like an American diner on the beach, with its seafoam-green accents and airy interior, but one look at the menu will set you straight.
Open In Google Maps
290 Brighton Beach Avenue, Brighton Beach, Brooklyn New York, 11235, USA
+17183321900
Visit Website
Give us feedback 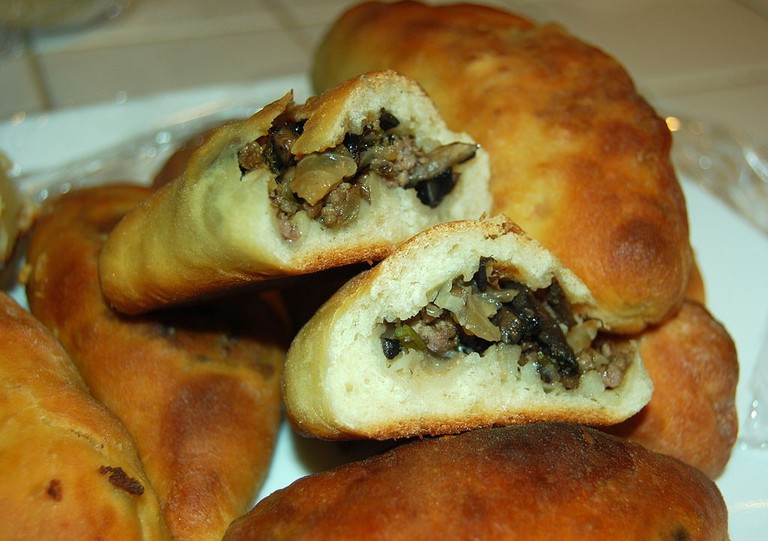 Piroshki | © Evilmonkey0013/Wikipedia Commons
If you’re in Brighton Beach you must have pirozhki,a Russian street food that simply means a baked or fried bun filled with anything. They’re cheap, they come in endless varieties, and you’ll find them on most street corners in the neighborhood, but if you simply grab the first one you see you may be disappointed. They’re not all created equal, so head to Gold Label Deli, the stand serving the best version.
Open In Google Maps
281, 285 Brighton Beach Avenue, Brighton Beach, Brooklyn New York, 11235, USA
+17187433900
Give us feedback

Cafe, Russian, American
Facebook
Email
Twitter
Pinterest
Copy link
Share
Map View
If you need a sweet fix, come to Bakery La Brioche Cafe. It has a strange Russian glitz to it, with gold trim and marble countertops, but it’s a home-style bakery through and through. There is so much to choose from and it’s hard to go wrong, but we recommend that you try the caramel cake, the rugelach,the vatrushka danishes filled with cheese, or a simple brioche. Some of this stuff can be super sweet, so grab a tea to wash it down.
Open In Google Maps
1073 Brighton Beach Avenue, Brighton Beach, Brooklyn New York, 11235, USA
Give us feedback
Give us feedback