Top 10 Things To Do And See In Flatbush, NYC

Sporting a diverse and bustling culture, idiosyncratic local shops, and landmarks, new and old, Flatbush represents the best of Brooklyn. Its long history is visible throughout, showing a district with a rich past, a burgeoning present, and a very bright future. We profile ten cultural things to do in this New York City neighborhood.
The Walt Whitman Theater Courtesy of Brooklyn Center for the Performing Arts

Brooklyn Center for the Performing Arts

Theater
The Brooklyn Center for the Performing Arts is a high-class performance venue located on the Brooklyn College campus. It has been the epicenter of Flatbush culture since its opening in 1954. Featuring world-renowned performers like Itzhak Perlman, Ray Charles, and Ladysmith Black Mambazo, it could charge through the nose like its Manhattan counterparts, but the Brooklyn Center for the Performing Arts remains committed to the community, always offering its shows at affordable prices. As its website says, ‘the Center’s mission is to introduce young people to the performing arts, enhance their creativity and expose them to new cultures and ideas.’ Let’s hope it can continue to do that for many years to come.
Looks like it's closed Hours or services may be impacted due to Covid-19
More Info
Open In Google Maps
2900 Avenue H, Flatbush, Brooklyn New York, 11210, USA
+17189514500
Visit website

Building, Art Gallery
Map View
Bar Chord's Garden | Courtesy of Bar Chord
Juan Carlos Pinto is a prolific local artist who’s poured a lot of love into the area. Two blocks from Café Madeline, on the corner of Cortelyou and Marlborough, you can see his portraits of John Lennon and Richard Pryor, made out of painted squares. But Pinto has murals throughout the area, notably at P.S. 217, the Q Gardens lot, and Newkirk Plaza. Created along with Brooklyn Recycle Project, the latter is a beautiful mosaic consisting of broken pieces of glass, mirror, and tile. It features guitars, hands, and faces bursting out of abstract forms that swirl into one another, producing a colorful mess of pretty. Pinto’s work celebrates culture and community with a vibrant energy. If it looks familiar, it’s probably because you’ve seen it at Two Boots pizza places around the city.
More Info
Open In Google Maps
New York City, New York, USA

Bar, American
Map View
A Packed Bar | Courtesy of Bar Chord
Eight rotating craft beer taps, one disco ball, and all the live music you could ask for — Bar Chord is a lovely local hangout with excellent local music. They’re booked nearly every night with acts ranging from jazz to folk to afrobeat, interspersed with the occasional night of comedy or trivia. And when the live acts aren’t filling the bar with music, there is a wall lined with vintage guitars — guitars which are very much for sale — and a functional jukebox. To top it all off, Bar Chord has a beautiful courtyard with a mural painted by, you guessed it, Juan Carlos Pinto.
More Info
Open In Google Maps
1008 Cortelyou Road, Flatbush, Brooklyn New York, 11218, USA
+13472406033
Visit website

Restaurant, Jamaican, Caribbean, $$$
Map View
Flatbush is home to a large Caribbean population, and this means great Caribbean food. The best example of this is Exquisite Express, a small shop dishing out authentic Caribbean fare. They have been lauded as the best jerk chicken in the area — a title which is well deserved. For nine dollars, you can snag a full dinner, replete with rice, peas, a tasty cabbage salad, and that deliciously charred chicken that lines its storefront window-spanning grill. Be sure to try the sauces, too, as they’re also the area’s best.
More Info
Open In Google Maps
2847 Church Avenue, Little Caribbean, Brooklyn New York, 11226, USA
+17186934643

Church
Map View
There’s a reason why Brooklyn has been nicknamed ‘The City of Churches’ — the borough is covered with them. Flatbush is not an exception to this rule, but it is an exceptional example. One church, in particular, the Flatbush Dutch Reformed Church, is a hidden gem of history and architecture. It is one of the oldest churches in Brooklyn (the name source of Church Avenue), established in 1654 at the behest of Peter Stuyvesant back when Flatbush was ‘Vlakke Bos’ (Dutch for wooded plain). The site’s current building was constructed in 1796. Its symmetrical façade, gabled roof, and center steeple make it a classic example of Federal-style architecture. Underneath the church are buried soldiers from the American Revolution’s Battle of Long Island, and behind it is a cemetery with tombstones dating back to 1754.
More Info
Open In Google Maps
890 Flatbush Avenue, Flatbush - Ditmas Park, Brooklyn Brooklyn, New York, 11226, USA
+17182845140
Visit Facebook page

Theater
Map View
A Beautiful Dish | Courtesy of The Farm on Adderley
Kings Theatre is the epitome of Flatbush’s past-meets-present vibe. It was built in 1929 as one of the five original ‘Loew’s Wonder Theatres,’ magnificent and ornate theaters built for both movies and live performances. However, with the advent of multiplexes in the 1960s, Loew’s Kings Theatre saw a steady decline until it closed in 1977, laying dormant for over 37 years. Now, with the help of the New York City Economic Development Corporation, Kings Theatre has been renovated and re-opened as a live performance venue, revealing a breathtakingly gorgeous French Renaissance Revival-style palace theater. Recent acts include Wilco, The Beach Boys, and Chaka Khan; tickets are also available for a guided tour.
More Info
Open In Google Maps
1027 Flatbush Avenue, Flatbush - Ditmas Park, Brooklyn Brooklyn, New York, 11226, USA
+18007453000

The Farm on Adderley

The farm-to-table movement hit Flatbush ten years ago with The Farm on Adderley, a chic little restaurant on Cortelyou Road. This is a perfect dinner or brunch spot, with a friendly staff, low-key atmosphere, and locally sourced ingredients. Dishes are expertly crafted and beautifully presented. It should also be noted that compared to other restaurants of similar quality, The Farm on Adderley is reasonably priced. Outdoor seating in their garden is available in the warmer months, and special events pop up throughout the year. A little tip: whatever you do, get the fries. 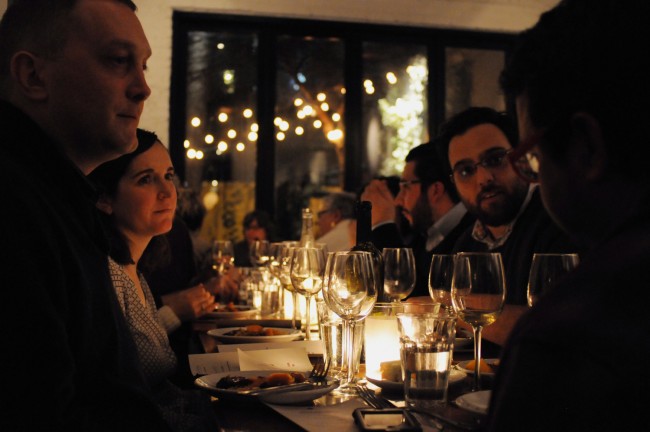 School
Map View
The mother of high schools is on Flatbush Avenue. Founded in 1787, and partially funded by Alexander Hamilton and Aaron Burr, Erasmus Hall was New York State’s first accredited secondary school. Seen from the street, Erasmus is a large quadrangular building, built in impressive Collegiate Gothic style in the early 20th century. Its elaborately decorative façade is a reminder of the rollercoaster-like history of Flatbush’s economy. Behind the school’s gates lies New York City’s oldest academic structure, the original Erasmus building, erected in 1787. It is now dilapidated and unused. Erasmus Hall’s Alumni Association has been fighting to get the building renovated for nearly ten years now, but funding is touch and go. As of this writing, restorations seem unlikely to take place anytime soon.
More Info
Open In Google Maps
911 Flatbush Avenue, Flatbush, Brooklyn New York, 11226, USA
+17185642580

Bar, American, $$$
Map View
If you’ve ever felt the urge to put a hydrangea in your Highland Park during a watercoloring workshop, Sycamore is your best bet. It is a beautiful flower shop-whisky bar hybrid. With a selection of 75 whiskeys, an expansive backyard, and a $10 bouquet-beer special, it’s hard not to love Sycamore. But it’s made even harder by their heated tent, The Lodge, which features a rotating food court of local vendors each day. This same Lodge is home to a Saturday brunch and a slew of special events, such as art workshops and flower arranging classes. Whatever you’re trying to do in Flatbush, chances are that Sycamore has you covered.
More Info
Open In Google Maps
1118 Cortelyou Road, Flatbush, Brooklyn New York, 11218, USA
+13472405850
Visit website