The Top 9 Things to Do in Manhattan's Gramercy Park

Hemmed by 23rd Street to the north, 14th Street to the south, 1st Avenue to the east, and Park Avenue to the west, the Gramercy Park neighbourhood of Manhattan is often regarded as a pristine and exclusive enclave of the rich. But, the area has a lot to offer outside the Historic Gramercy District’s stately brownstones and quiet tree-lined streets. 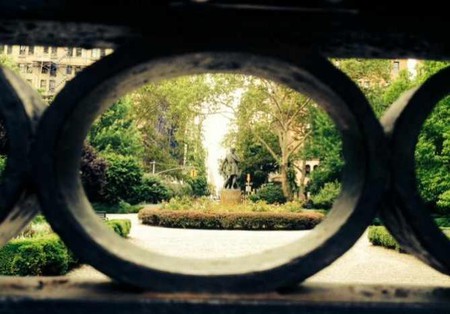 Gramercy Park / on the outside looking in | © Olivia Edwards

At the center of Gramercy lies the neighbourhood’s namesake, Gramercy Park, one of only two private parks in New York City, the other being Sunnyside Gardens Park in Queens. Gramercy Park has been the posh playground of the well-to-do since 1831, with access to the park limited to key-holding residents of the surrounding 39 residential buildings, in addition to members of select clubs, religious institutions, and hotels. The rest of the world must content itself with gazing through the wrought iron fence enclosing the grounds. If the pull of the Secret Garden is too intoxicating to resist, know that your insatiable curiosity can be quenched on Christmas Eve, the one day of the year that the park gates are opened to the general public: a genuine Christmas miracle. 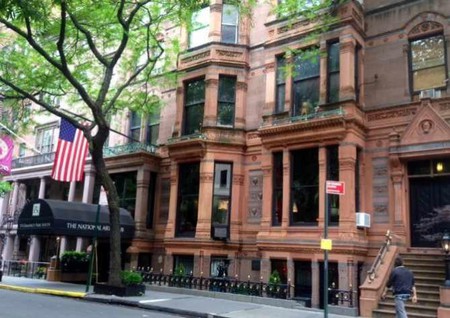 Two picturesque Victorian mansions grace the street directly opposite Gramercy Park: the National Arts Club and the Players Club. The former has called Gramercy Park home since 1906. Ornamenting the façade of the building are the heads of Shakespeare, Goethe, Dante, Milton, Benjamin Franklin, and Michelangelo. This collection of authoritative figures indicate the Club’s membership record, with three former U.S. presidents on the books – Theodore Roosevelt, Woodrow Wilson and Dwight D. Eisenhower. The Players Club is the oldest club in New York City, and still in its original location, it has enjoyed the patronage of Mark Twain and General William Tecumseh Sherman (both founding members). Both clubs are accepting new members, and while The Players Clubhouse is reserved for members and their guests, the National Arts Club regularly hosts public events, including exhibitions, lectures, performances, and classes. 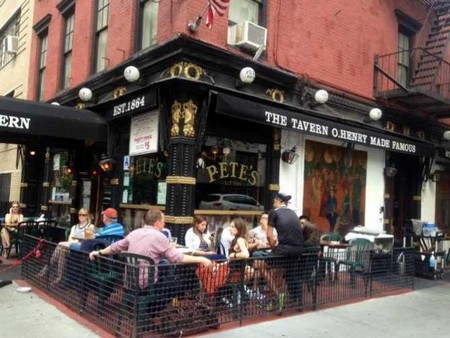 Bar, Restaurant, Gastropub, Pub, Italian, $$$
Facebook
Email
Twitter
Pinterest
Copy link
Share
Map View
After soaking up the copious amounts of history in the area, head over to Pete’s Tavern for a rewarding tipple. Pete’s belongs to a small club of establishments claiming to be the oldest continuously operating tavern in New York City. Pete’s opened in1864, disguised as a flower shop during Prohibition to continue to illegally sell alcohol. At the turn of the century, Pete’s was frequented by American writer O. Henry. Legend has it that O. Henry penned his most famous work, Gift of the Magi, in the second booth. Today, Pete’s makes a business out of capitalizing on its colorful history, and while most would agree that it might not be performing any culinary feats in the kitchen, the old tavern charm, neighborhood feel, and reasonable prices keep it a local favorite.
Open In Google Maps
129 East 18th Street, Manhattan New York, New York, 10003, USA
+12124737676
Visit Website
Give us feedback 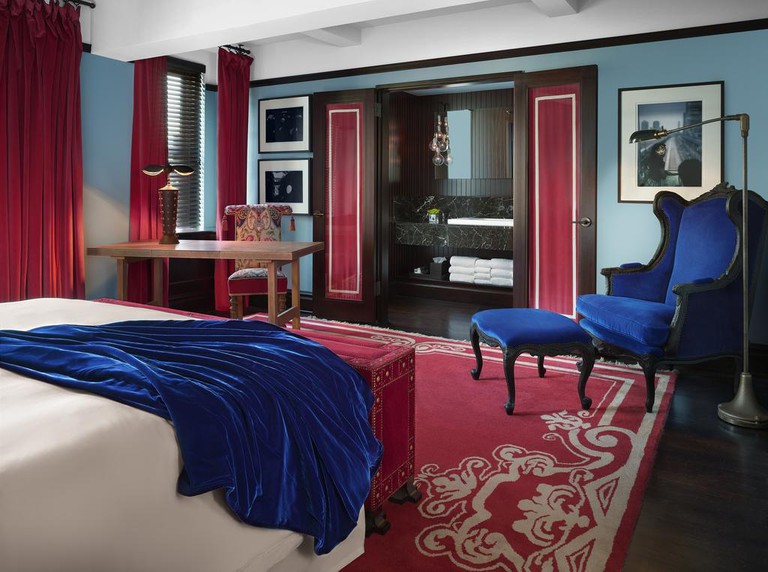 Courtesy of Gramercy Park Hotel / Hotels.com
View Rooms
The Gramercy Park Hotel, an eighteen-story Renaissance Revival hotel, opened its doors in 1925. Notable guests include Humphrey Bogart, President John F. Kennedy, Babe Ruth, and legendary musicians such as the Rolling Stones and the Beatles. These days, Gramercy Park Hotel is known for its collection of artwork from the likes of Andy Warhol and Jean-Michel Basquiat. Can’t afford a room but still want to admire the artwork? Come for a drink at the hotel’s Rose Bar where you can sip a ginger fig martini, or stop for an orange jalapeno margarita at the more laid-back Jade Bar. Danny Meyer, the New York-based mastermind behind popular burger chain Shake Shack, operates the hotel’s on-site restaurant, Maialino. The Roman-style trattoria sources seasonal ingredients and offers traditional Roman cuisine including pasta and offal dishes.
More info

Bar, British, $$$
Facebook
Email
Twitter
Pinterest
Copy link
Share
Map View
Gin and crumpets are the specialty at this British gastropub. The Winslow takes a cue from Gramercy and East Village neighborhoods with a sophisticated cocktail menu and a collection of flat-screen TVs broadcasting SportsCenter on a continuous loop. ‘The Bee’s Knees’ is a popular cocktail choice here, consisting of gin, honey, lemon, bee pollen, while the ‘Damn Dirty Ape’ – monkey shoulder, Drambuie, amaretto, bitters , lime – is a great alternative to the gin-based cocktails. Beer enthusiasts will find something to love here as well, as there are around 20 beers on tap. The Winslow’s menu is an assortment of British-inspired pub food, including Scotch eggs, bubble and squeak, traditional fish and chips as well as crumpets, of course.
Open In Google Maps
243 East 14th Street, Manhattan New York, New York, 10003, USA
+12127777717
Visit Website
Give us feedback

The Stand Restaurant and Comedy Club 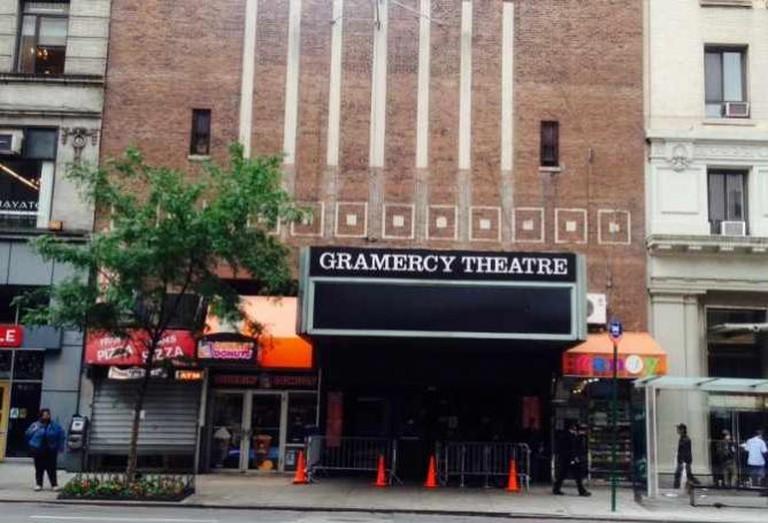 Gramercy Theatre | © Olivia Edwards
Voted Best Comedy Club by New York Magazine in 2013, The Stand brings class to the New York comedy scene. In the few short years since its opening, The Stand has hosted names such as Dane Cook, Judah Friedlander, Dave Attell, Gilbert Gottfried, Janeane Garofalo, Bill Burr, and Ari Shaffir. Shows also feature up-and-comers and comedians trying out new material. However, it’s not just about the laughs here, the restaurant upstairs has a serious menu with offerings such as pork belly rice balls and bone marrow dumplings, as well as a range of cocktails, beers and wine. Purchase tickets in advance and ensure you get there early to secure a seat – unless you enjoy being the butt of a joke.
Open In Google Maps
116 East 16th Street, Manhattan New York, New York, 10003, USA
+12126772600
Visit Website
Give us feedback 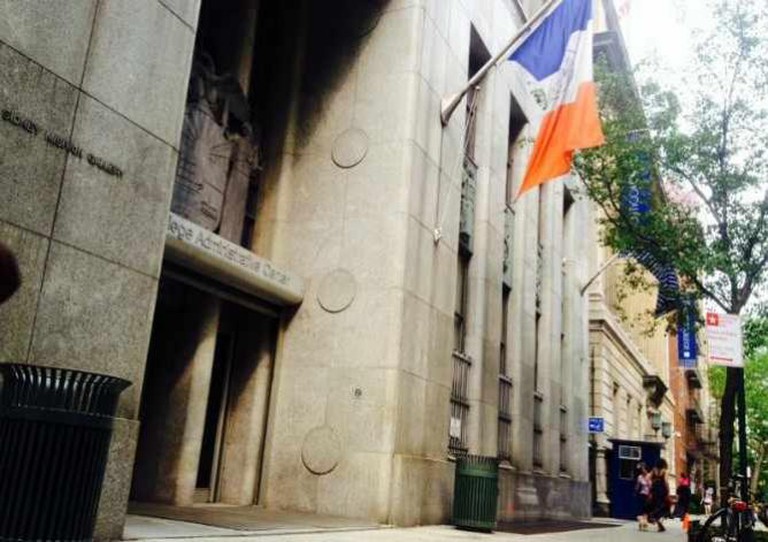 Sidney Mishkin Gallery at the Weissman School of Arts & Sciences, Baruch College | © Olivia Edwards
This popular music venue has undergone several reincarnations since its opening in 1937. The theatre transformed into a playhouse in 1998 to show Off-Broadway productions. Live Nation then bought the space in 2006 and turned the theatre into the concert venue it is today. Acts to grace the stage since include: Huey Lewis & The News, The Jonas Brothers, Macy Gray, Rufus Wainwright, Spoon, and Jay-Z. There are also two bars to satisfy all your pre, mid, and post-show drinking needs, and with both general admission and seating in the back, you have your choice of viewing options. A favorite haunt of hipsters on the hunt for the latest in freak-folk-indie-rock-core, Gramercy Theatre’s rotation of up-and-coming and under the radar bands hits all the high notes.
Open In Google Maps
127 East 23rd Street, Manhattan New York, New York, 10010, USA
+12126146932
Visit Website
Give us feedback 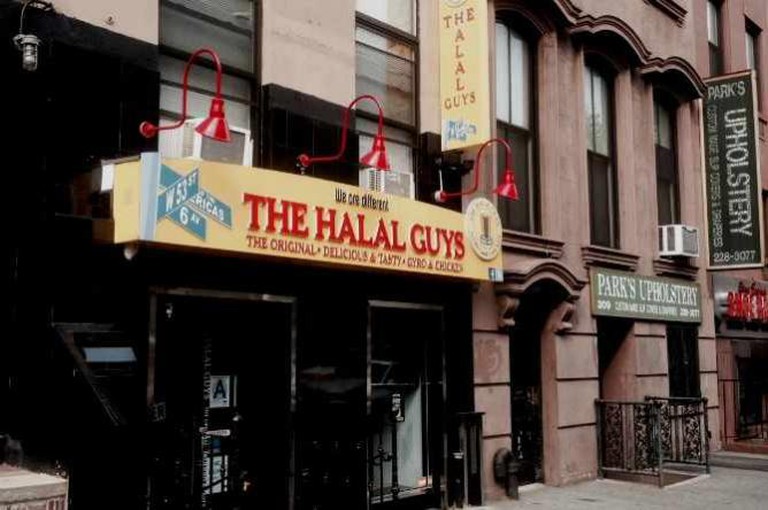 The white sauce wizards | © Olivia Edwards
With a permanent collection of over 600 artworks from the 20th century, the Sidney Mishkin Gallery has been a Gramercy Park art institution for over 25 years. The gallery holds five shows a year, with exhibitions running the gamut from scholarly and multicultural shows to one-person exhibitions. The gallery is open to the public during the academic year, and gallery talks and symposia are held as part of the College’s focus on interdisciplinary studies.
Open In Google Maps
135 East 22nd Street, Manhattan New York, New York, 10010, USA
+16466606653
Visit Website
Give us feedback

Not in the mood for $15 dollar martinis? Leave your fancy pants at home and head over to this no-frills outpost of the original 53rd and 6th Street food cart. These guys serve up simple, delicious platters of chicken or gyro meat sandwiches drizzled in their famous creamy white and tangy red sauces. And hungry New Yorkers are willing to withstand the queues for it. The wait at Halal Guys at 14th is shorter, but the tiny, harshly-lit space does fill up fast. Insider tip: You can purchase white sauce here by the bottle to take home with you. Use it sparingly on food-appropriate dishes. Or just guzzle it straight from the bottle – you know you want to.

We interrupt your social media browsing session to remind you that you're not eating a combo platter right now. Let’s fix that.