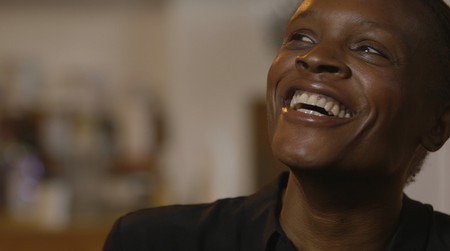 In the film of Okwui Okpokwasili’s touring solo show, she acts, dances, and sings a searing story of an adolescent brown girl’s traumatic coming of age. Then she brings it all home to The Bronx for an emotional reckoning.

Directed by Andrew Rossi, Bronx Gothic documents Okpokwasili’s 2014 multi-disciplinary performance piece, in which she uses her body as a political site of inquiry into the violence perpetrated against “brown” girls. That same powerful body is also a temple.

Rossi cuts between the show and an interview with the 44-year-old writer-actress-singer-dancer, and depicts her interacting with her white husband and stage director Peter Born and their young daughter Umechi. Okpokwasili visits with her Nigerian immigrant parents, who are reluctant to see footage of her confrontational show. After they’ve viewed it, Okpokwasili’s mother eagerly demonstrates her own style of dancing, and Okwui and Umechi join in. The show winds up in the middle-class Bronx neighborhood where Okpokwasili grew up in the 1980s. It’s a painful but cathartic homecoming. 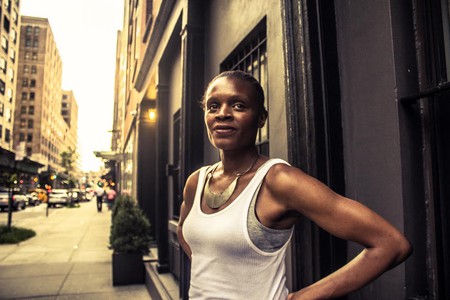 The story Okpokwasili tells in the Bronx Gothic performance—which begins with her vibrating fiercely and silently in a corner of the stage for some 30 minutes as audience members take their seats—is fictitious. Yet it seemingly contains elements from her upbringing. At its heart is the friendship, rivalry, and sexual awakening of two 12-year-old girls—the narrator “ugly” and naive, the other beautiful and knowledgeable about sex. “You can’t have an orgasm from a Frisbee,” the more experienced girl tells the narrator. There are intimations of sexual abuse in their homes.

The girls’ violent split via letters traumatizes the narrator. As the film opens out cinematically, the narrator seeks to heal her wounds by looking for her vanished friend. She is, of course, seeking to reclaim her adolescent self.

As the film’s first New York audience watched it at Film Forum on the evening of July 12, Okpokwasili sat in an upstairs office there and talked warmly about her journey into her past.

Culture Trip: Watching the film excerpts of you performing your uninterrupted vibrating dance at the start of the Bronx Gothic show, I felt I’d never seen anything like it before. Yet the dance seems to carry a cultural imprint from the past. Is it intended to have trace marks of African dance in it?

Okwui Okpokwasili: I don’t necessarily think it does. When I’m doing performance, I consider that my body has a certain meaning and it’s going to be read in a certain way. I think about how I can create a space where those readings can happen but then be challenged by the people who are looking. I’m not going to tell, but I’m hopefully going to start some kind of engine or open a magnetic field.

I started writing the piece first and began thinking about that movement because I was looking at twerking. When you see young girls do it, there’s a sexual precocity in it. Because twerking is very much associated with black girls, when someone like Miley Cyrus does it, it becomes like a signifier for appropriation. I remember girls doing it when I was growing up. We used to show each other our dances and share them. 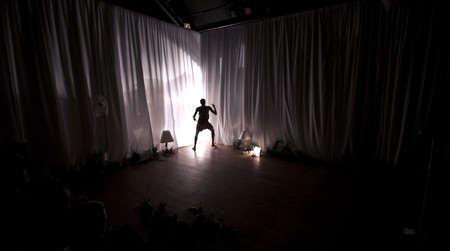 Okwui Okpokwasili in Andrew Rossi’s documentary BRONX GOTHIC, based on Okpokwasili’s performance of the same name. Courtesy of Grasshopper Film.

So I started to think about that for the show, and what happens if twerking goes on and on and on. It’s not really sexy, but then what is it? And how wrong can it go if you take a movement like that, which has to originate in the belly and the hips, and never stop moving? What is it going to do to me and where’s it going to go?

CT: Could it be likened to a mating dance?

OO: It could, depending on who’s watching. It could also be a form of extreme anguish. When you’re in that space, all sorts of things work within you. You ask yourself, is your body sexy, or is your body ugly? Do you belong here, or don’t you don’t belong here? Or maybe there is no language in your head. Things come up and then drop away.

I would start to make space in my mind to think about the whole show. When I would do that dance for an hour, I would basically do all the characters in my head. I would toggle back and forth between the movement and the text. [pause] It’s weird that I don’t feel it’s sexy, even though I have had people look at it and tell me that it’s sensual. My body would be sweating, of course, and my dress would be, like, dripping, especially in hot places. I don’t like to perform in cold places! 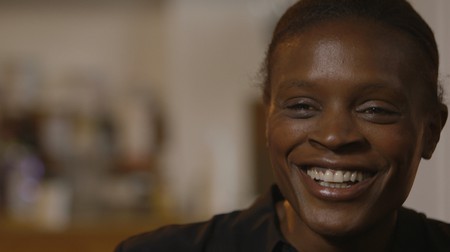 Okwui Okpokwasili in Andrew Rossi’s documentary BRONX GOTHIC, based on Okpokwasili’s performance of the same name. Courtesy of Grasshopper Film.

CT: It’s a kind of semi-autobiographical fiction about two girls—who could possibly be every brown girl.

OO: Or the many brown girls who are in me, you know?

CT: The narrator’s relationship with her mother’s boyfriend is somehow pivotal. It’s clear the narrator has experienced some kind of sexual abuse.

OO: Yeah, she has definitely been used. She has had to manage the after-effects of some kind of predatory behavior. Like a kind of PTSD. 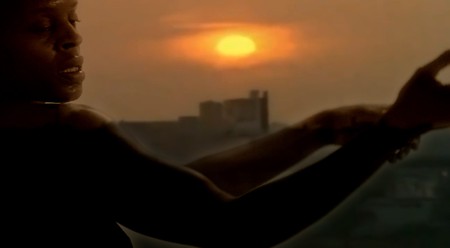 CT: She talks about receiving an angry letter from her more sexually knowing best friend and the traumatic split that occurred between them. It’s possible they may even be one and the same person—that she splits from herself. Growing up, did you have a best friend that you parted from in reality?

OO: Not so dramatically as in the show. People fall in and out of your life, but they also remain with you—and the questions remain. I remember this one white boy who lived in a garden apartment in the neighborhood with his grandmother. Whenever he came outside, he was scraped up and bruised, and he always looked sad. I never thought at the time that he was being abused or beaten, but I’ve thought about it since. People like that flash up in your memory.

Yeah, there was a figure in my life that I indulged in a very big speculation about—this one particular girl who I was good friends with in The Bronx. I remembered a note she sent me. I don’t know why I thought about this note, or if it was because I was pregnant at the time. It comes up every now and then.

CT: She was more mature than you?

OO: Yeah, we were 12. She had had her period when she was nine. I don’t know if boys do this, but girls divulge a lot about each other when they go to the bathroom. We would show each other our breasts and, say: “Whoa, what’s happening with you?” or “Nothing’s happening with you.” So I knew things about her. She was a beautiful, voluptuous young girl, and she knew sexual stuff that was really amazing—the kind of stuff I was never sure about. 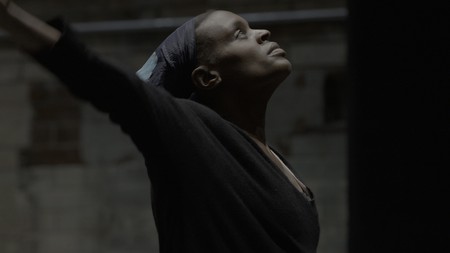 CT: The film shows you returning to The Bronx to do the last performance of the show. It’s hard to tell what emotions you’re experiencing.

OO: The Bronx Academy of Art and Dance is located in a building on the campus of St. Peter’s Episcopal Church near Westchester Square. It’s a nice Gothic church where my family used to go to services, but it’s really hard for me to go back there. The people were kind of mean. Maybe it’s because we were always late. Back then, I didn’t feel welcome—it was like I was an alien there.

CT: Have you been to Nigeria?

CT: Bronx Gothic is partly about what it’s like to be shaped by an environment, so I was wondering what place you feel closest to.

OO: It’s a good question. When I go back to The Bronx, I do feel a lot of the old stress of being different, though my parents are very loving people and they took care of us; we had a loving home. I feel closest to Brooklyn—Bed-Stuy, Fort Greene. I’ve performed at the Harvey Theater [in the Brooklyn Academy of Music] with Ralph Lemon [her mentor] a couple of times. I saw Peter Brook direct there in the 1990s.

The Theater for a New Audience at the Polonsky Shakespeare Center, BRIC in Fort Greene—these places are where community happens and where my work happens, so they are like home to me. They give me a feeling of belonging as much as a feeling of displacement because of gentrification. But they at least still have a sense of discovery and the life of the mind. They make you feel your eyes are wide open. 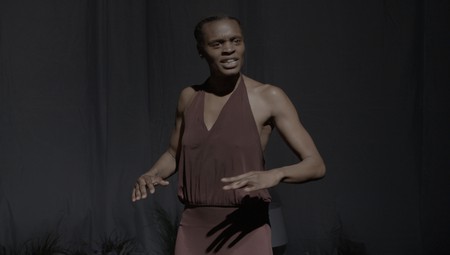 CT: In the show and the film, you’re very open about embracing everyone who’s watching—inviting us to try to feel what it must be like to be African-American in the current moment.

OO: I’m not trying to make a general statement about African-Americans. I’m just saying, “Okay, here’s this body going through these changes having experienced this trauma and pain.” I am a brown body, inevitably, yes. But even so, there is a way for some kind of mutual feeling, right? Like, you open the door to empathy and hope.

CT: Given what the film says about what girls go through, I imagine you’re going to be proud to show it to your daughter when she’s older?