The Best Restaurants For Breakfast And Brunch In Soho, New York City 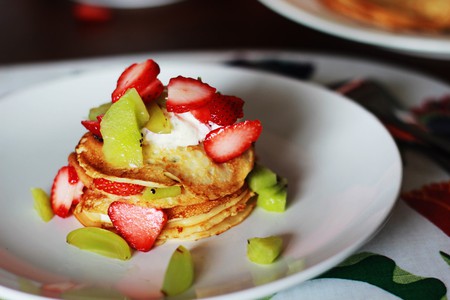 Stylish Soho is home to some of New York City’s top spots to start the morning with a mimosa. From fabulous French pastry shops to cozy cafes and ultra-chic brasseries, the breakfast and brunch scenes in this neighborhood are among the very best in town.

The modern-classic brasserie Balthazar is a power-breakfast spot for many a New Yorker, and its Sunday brunch is a scene worth saving up for. The menu of French standards includes many of the restaurant’s dinner options (think onion soup and steak frites), with the addition of a few sweet options like apple-cinnamon pancakes or a basket of breads and pastries from its famous sister bakery.

Breakfast might be the only time you can easily snag a reservation at Le Coucou, New York City’s hottest new restaurant. Fortunately, rising early is worth it for the French pastries made in-house and dishes such as a gruyère omelet or fruit-studded clafoutis. Go for a weekend brunch and you can try some of the best small plates from the dinner menu: the quenelle de brochet in lobster sauce is a must-order.

It’s the birthplace of the cronut, yes, but Dominique Ansel has many other amazing breakfast goodies on offer as well. Try the DKA—Ansel’s perfected version of a kouign amann, a buttery, layered Breton pastry that’s recently taken New York City by storm, or the egg sandwich served with gruyere in a brioche bun. Dominique Ansel, 189 Spring St., New York, NY USA +1 212 219 2773

A single Brown Sugar #DKA. Flaky layers inside with a deep molasses flavor, and that gorgeous caramelized crunchy crust outside. 👌 #DominiqueAnselKitchen #Westvillage #DKA #DominiquesKouignAmann A photo posted by dominiqueansel (@dominiqueansel) on Aug 30, 2016 at 9:43am PDT

Hundred Acres may serve other meals too, but it’s a brunch place at its core, known for its cinnamon buns and appreciated for offering multiple takes on the Bloody Mary. Its most popular brunch dishes include the “PB&J” pancakes and an ever-changing presentation of baked eggs.

A cozy all-day cafe, Jack’s Wife Freda is at its finest during the breakfast and brunch hours. From the Mediterranean menu, you might choose “green” shakshuka, made with tomatillos, or the rosewater waffle topped with berries and Lebanese yogurt. Might we suggest washing it all down with a cantaloupe mimosa?

From the folks behind flashy and pricey culinary theme parks such as Carbone and Santina comes Sadelle’s, best appreciated as an ode to Jewish-deli specialities. This is where to come to for breakfast for a feast of bagels and lox; babka; or a fried egg, bacon, and muenster sandwich you’ll be daydreaming about for days.