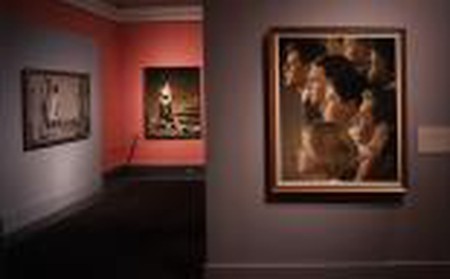 Norman Rockwell is hailed by many as the USA’s beloved illustrator, a visual storyteller who captured the spirit and aspirations of a nation and sketched the zeitgeist of middle-class America. Alternately, Rockwell works are dismissed as saccharine, and the artist is critiqued as constructing an unrepresentative fantasy of America. We explore the life and work of America’s contested icon, Norman Rockwell, and take a look at his most famous illustrations.

In whatever manner Rockwell’s art is digested, there is no denying his popularity and impact. Throughout his 47-year professional relationship with The Saturday Evening Post, Rockwell illustrated a total of 322 cover artworks for the magazine, and in 1958 became the first artist to be inducted into the Society of Illustrators Hall of Fame. More recently, in December 2013 three Rockwell paintings were sold at a Sotheby’s auction for over $83 million, with his 1951 painting Saying Grace, which graced the front of The Saturday Evening Post in the same year of its creation, fetching $46 million alone – nearly three times its estimate. In 2011, Rockwell’s important work The Problem We All Live With, which appeared on the cover of Look magazine in January 1964 and has since become a symbol of racial equality, was on display outside President Barack Obama’s Oval Office in the White House. 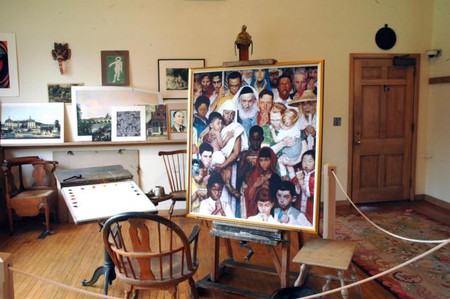 However many criticisms of Rockwell’s works there may be, it does seem the art world is currently courting a Rockwellian Renaissance of sorts – an ideal climate in which to re-examine Rockwell’s appeal, both past and present, his styles and impact, and the meanings and consequences of the images he produced that have become so ingrained in perceptions of the good ol’ days of America.

Norman Perceval Rockwell was born in New York City on 3 February 1894. A talented artist from a young age, at just 14 Rockwell enrolled in classes at The New York School of Art before leaving high school aged 16 to study at The National Academy of Design. He later transferred to study at the prestigious Arts Students League of New York, where he worked under the tuition of illustrator Thomas Fogarty and Canadian-American painter George Bridgman.

Rockwell achieved his first success at a young age too, hired as a staff writer aged 19 for Boy’s Life, the magazine of the Boy Scouts of America in 1912, where he worked for the next four years before he began working for The Saturday Evening Post. It was here at the Post that Rockwell produced some of his most iconic imagery – the innocent antics of small town America as in No Swimming (1921) where three rascally boys run from an unseen figure after being discovered trespassing, or his After the Prom (1957) depicting two starry-eyed teens on a post-prom date at a mom and pop diner. Says Laura Cumming of The Observer, ‘His was an America of soda-fountains, proms and mountainous Thanksgiving turkeys, of avuncular cops, twinkly grandpas, young love and long marriage.’

And while Rockwell’s pieces for the Post undoubtedly had a mass aesthetic appeal – late Metropolitan Museum of Art director Thomas Hoving noted Rockwell’s ability to blur the lines between ‘low’ and ‘high’ art and how he turned many Americans on to art – his works, some say, served a powerful social and political function.

Art critic Deborah Solomon, who has recently written a Rockwell biography, has an interesting theory – that Rockwell, at least in part, helped to create a cohesive ideal of ‘Americanness’, one that the New World was lacking in. ‘The great subject of his work was American life – not the frontier version, with its questing for freedom and romance, but a homelier version steeped in the we-the-people, communitarian ideals of America’s founding in the 18th century. The people in his paintings are related less by blood than by their participation in civic rituals, from voting on Election Day to sipping a soda at a drugstore counter,’ says Solomon, ‘Because America was a nation of immigrants who lacked universally shared traditions, it had to invent some. So it came up with Thanksgiving, baseball – and Norman Rockwell.’

This idea is perhaps particularly relevant in Rockwell’s famous Four Freedoms series, inspired by President Franklin Delano Roosevelt’s impassioned address to Congress, asking America to support World War II efforts. The four paintings – Freedom of Speech, Freedom of Worship, Freedom from Want and Freedom from Fear – were published in The Saturday Evening Post in 1943 over four consecutive editions accompanied by essays from popular writers. Rather than depict the horrors of World War II, Rockwell portrayed homely scenes – an extended family gather at Thanksgiving, a doting mother and father tuck their children into bed. Rockwell visually constructed the freedoms and values – however real or imagined – that came to define America and persuaded its everyman citizens they were worthy of fighting for to uphold. As Peter Schjeldahl writing for the New Yorker said, ‘He didn’t illustrate Middle America. He invented Middle America.’ 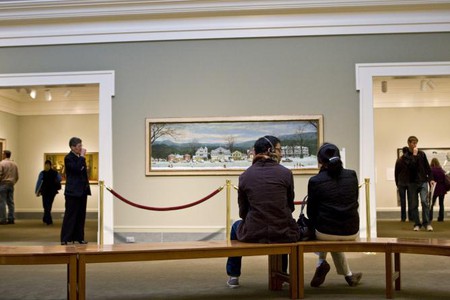 Rockwell’s critics have been far less forgiving, as in Rampart magazine’s 1972 takedown in which journalist Marshall Singer reports of Rockwell’s art, ‘It holds up a mirror to America; not the America that was, of the America that should have been, but the sugar coating that sweetened the bitter pill.’ Perhaps true, though Rockwell did, in the early 1960s, turn his hand to the socio-political issues that blighted and cast doubt on the American dream, creating paintings that presented the country in a less than perfect light and encouraged social awareness in its viewers.

In 1963, Rockwell started working for Look magazine – a position that allowed him to produce less twee, more edgy works, which addressed the growing concerns that Rockwell had developed in the increasingly turbulent 1960s. His 1963 painting The Problem We All Live With was inspired by Ruby Bridges, the first African-American child to attend a formerly all-white school in New Orleans after desegregation, and shows an innocent young girl in pigtails transported by faceless marshals while graffitied racist slurs adorn a background wall. Says David Kamp of Vanity Fair, ‘It was a radical departure from the Rockwell that America knew and loved.’ And Rockwell again portrayed an uncomfortable truth when in 1965 Look magazine printed Murder in Mississippi (alternately know as Southern Justice), which depicted the murder of three civil rights activists – Michael Schwerner, Andrew Goodman and James Chaney – by the Ku Klux Klan in Philadelphia, Mississippi.

So, while Rockwell can never be separated from the quaint depictions of Middle America he often produced, his work nevertheless did extend beyond simple scenes of small town bliss into important, and widely consumed, commentary on social issues. As Kamp again notes, ‘While his approach was calculatedly upbeat, it was never shallow or jingoistic, and his work, taken as a whole, is a remarkably thoughtful and multifaceted engagement with the question, “What does it mean to be an American?”’

Whatever the critics’ opinion of Rockwell, his recent posthumous success at Sotheby’s and his work exhibited in the White House are proof of his lasting legacy as an astute and talented artist that captured the spirit, ideals, and often the troubled side, of modern America. 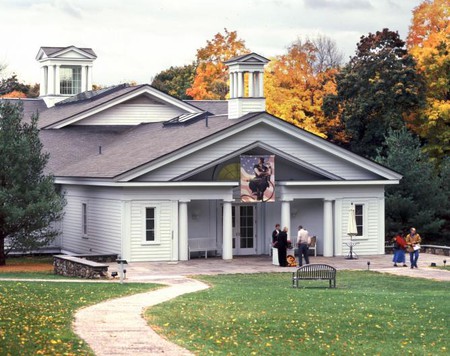 To see over 900 paintings and drawings by Rockwell, visit the Norman Rockwell Museum. Located in his adopted hometown of Stockbridge, Massachusetts, the museum is home to the largest collection of Rockwell originals and over 100,000 photographs, letters and mementoes. Originally founded in 1969 with the help of Rockwell himself, the museum occupies a 36-acre plot overlooking the Housatonic River and amongst its collection is The Problem We All Live With (1963) and Stockbridge Main Street at Christmas (1967).