My Culture Is Not Your Costume 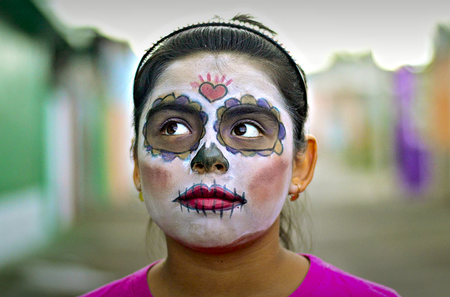 As people fall into autumn, and Halloween draws near, it’s apropos to wonder what constitutes a culturally insensitive Halloween costume?

Last Halloween, Mahala Herron caused a bit of controversy on Twitter when she posted a reminder to Halloween revelers everywhere to be culturally sensitive when it comes to dressing up. Her viral tweet about Halloween cultural appropriation pointed out that there are certain outfits that cross the line of cultural insensitivity. It’s an unsavory fact that many people practice cultural appropriation in their daily lives without even realizing it. On the other hand, cultural exchange is a valuable benefit of today’s global world.

It’s an issue that has been particularly in relevant in the fashion industry, where designers tow the line between exchange and appropriation all the time. This summer, Gucci was accused of copying Dapper Dan‘s puffy shouldered fur bomber jacket, originally designed for Olympian Diane Dixon.

However, Gucci’s Alessandro Michele insisted the 2017 bomber jacket was an homage to Dapper Dan. Indeed, the two are collaborating on capsule collection, and Dapper Dan was seated in the FROW of Gucci’s SS18 show this past September.

Last fall, the industry agreed that white models wearing dreadlocks at the Marc Jacobs SS17 show was uncool. Why? It’s an example of cultural appropriation, not cultural exchange. This brings us back to the notion of being aware and sensitive about what might be considered cultural appropriation in our globally curious world. So bear in mind:

Halloween is coming up, so everyone please remember that my culture isn’t a costume 😊 Thank you pic.twitter.com/pL5QOAJCy7

But not everyone agrees with Herron’s statement.

No lie all races guilty of this shit , we just gotta let bygones be bygones .unless it’s blatantly racist.let it be,Y’all killing Halloween https://t.co/3kjxiLVN77

As these users claim, Halloween is about fashioning a ‘costume;’ in fact, another Twitter user took the liberty of posting a screen shot of the definition of the word ‘costume,’ in order to make this point.

What defines cultural appropriation is the central dynamic between power and privilege. Using Marc Jacobs’ dreadlocks on white models as an example, what’s problematic here is that African hairstyles came to the United States by way of the African diaspora. In the centuries that followed, and even today, the relationship some black people have with hair is fraught. Some people are faced with what Mic writer, Erika Turner calls, the “highest degree of scrutiny — from assessments about your professionalism to comments from other black folks about your so-called lack of self-respect.”

In short, Turner points that that if you’re not black, you have the privilege of “not having to agonize over the message you’re sending” just by choosing how to wear your hair. When white people, like Marc Jacobs, decides to ‘normalize’ dreadlocks, or even call them ‘fashionable,’ he’s shifting the power dynamic to a position of privilege. That’s how cultural appropriation works. (For the record, Marc Jacobs issued an apology about using dreadlocks in his SS17 show.)

On the heels of the Herron tweet, a white Florida teen posted a picture of herself dressed as rapper Black Kodak (who is black), and caused even more Twitter controversy about cultural appropriation and Halloween costumes.

“People know that blackface is wrong, but many people don’t know about Navaho or Lakota,” says Moya-Smith. That’s problematic because on a large scale, Native Americans, according to Moya-Smith, “have been excluded from the American conversation. Some people are humble in their ignorance, because they just don’t know certain things about cultures that aren’t their own. For example, the headdress is more than a style of dress, it holds religious significance.” Moya-Smith explains, “In my culture, elders have to earn the right to wear a headdress. This type of cultural appropriation is a form of dehumanization. So when I see people dressed as Indians on Halloween, I can’t just have a good time. People are belittling and mocking my spirituality with their faux feather headdresses.”

So, with these thoughts in mind, here are culturally insensitive Halloween costumes to avoid so that every American can enjoy an ethical celebration of this holiday. 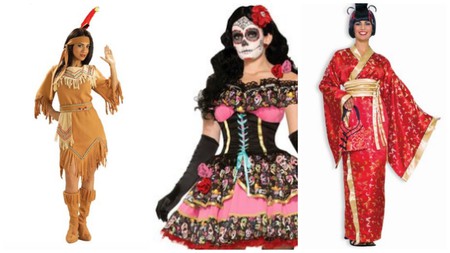 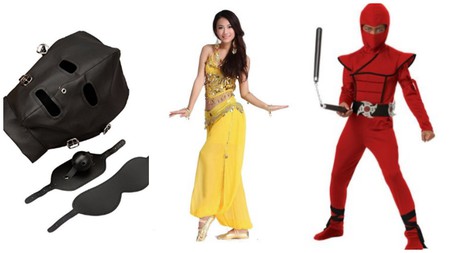 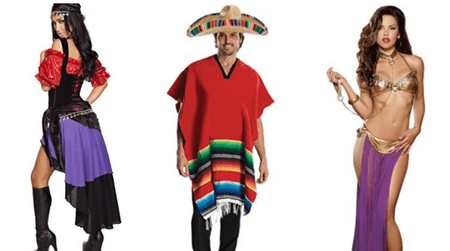 From L – R: Sexy Gypsy, Mexican With Poncho And Hat, Harem Girl
Give us feedback