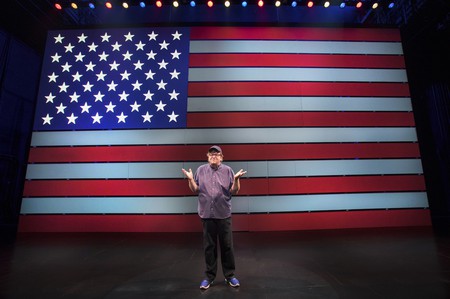 Michael Moore in "The Terms of My Surrender" | © Joan Marcus

If you happen to be a diehard Republican and/or an unrepentant admirer of Donald Trump, don’t go see Michael Moore’s stage debut at the Belasco Theater. If, on the other hand, you like Moore’s books, films, and TV shows and are not enamored of our current commander in chief, I definitely recommend The Terms of My Surrender.

The rumpled, not-svelte Moore—best known for his films Roger & Me, Bowling for Columbine, and Fahrenheit 9/11—doesn’t get dressed up for his Broadway debut. No, he sports his usual jeans, untucked shirt, and baseball cap. He does, however, get the Broadway treatment thanks to ace director Michael Mayer (Spring Awakening) and clever designer David Rockwell (She Loves Me). 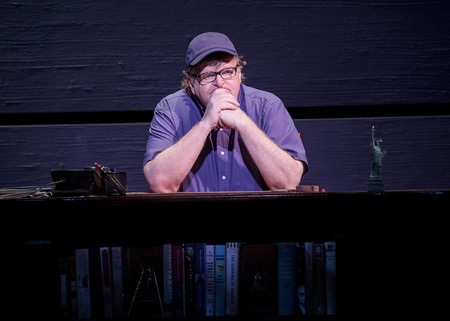 Early on, Moore calls his show a “12-step meeting” for anyone who is upset about the Trump Presidency. While recent headlines scroll across the large Stars and Stripes backdrop, Moore describes the “daily shit show” America is enduring thanks to our Twitter-obsessed leader. Considering how depressed the current political climate makes many people feel (especially liberal New Yorkers), Moore manages to be engaging and amusing.

He does go off on tangents that aren’t related to Trump. In one of the funniest sections, Moore quotes a Transport Security Administration manual about some of the things travelers can’t bring on a plane: meat cleavers, leaf blowers, and other unlikely items. At times the tone turns serious, as when Moore mentions 9/11 and Ronald Reagan’s controversial visit to the German military cemetery in Bitburg. 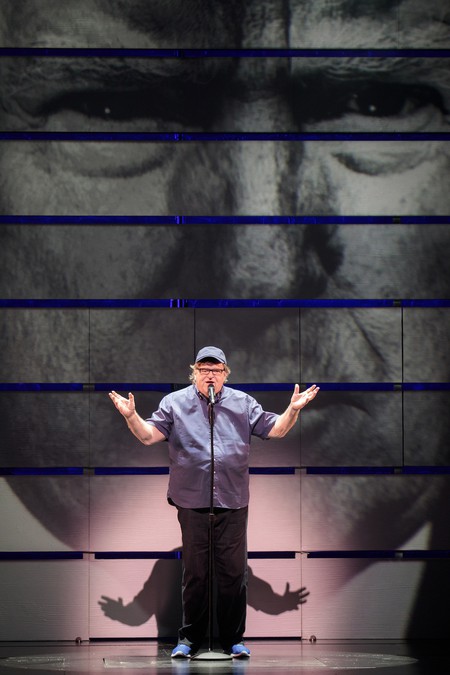 Besides criticizing Republicans, Moore says he wants to inspire people who are unhappy with Trump and his agenda to get involved in politics. He tells the audience to go to 5calls.org where they can find their representatives’ contact info; apparently the app will even dial the number for you.

Moore’s autobiographical anecdotes are meant to show that it’s not hard to make an impact. As an example, he talks of attending a junior governor convention in Michigan when he was a high-school student. It was sponsored by the Elks club, which in the early 1970s was still a whites-only organization. He wrote a paper about the Elks’ racism and was asked to read it at the convention (with the head of the Elks club glaring at him onstage). The news coverage led to the Elks changing their discriminatory policies.

Some would say that Moore is blowing his own horn and telling too many stories about himself. It’s true that he could have included more examples of other ordinary people who have made a stink and made a difference. But I enjoyed his stories and he seemed to fire up the like-minded audience. 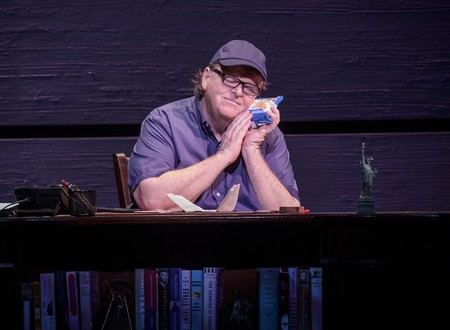 “We are the majority,” he says several times. He means that most Americans think there should be some degree of gun control, believe climate change is real, and think the minimum wage should be higher. Moore saves his most biting critique for Michigan’s governor Rick Snyder, a former CEO whom he blames for the contamination of the water supply in Flint, Michigan. “That was a prologue to Trump’s America,” Moore says. Despite the environmental disaster, Snyder remains in office.

Laughter in the dark

The Terms of My Surrender is almost a one-man show, but a few other actors have bit parts and turn up in the surprisingly peppy finale. Aided by his resourceful director and appealing castmates, rabble-rouser Moore makes us laugh and sends us out with a smile. These days many of us need a few laughs.

Michael Moore on Broadway: The Terms of My Surrender is at the Belasco Theatre, 111 West 44th Street. For tickets go to Telecharge.com or call (212) 239-6200. Limited engagement.