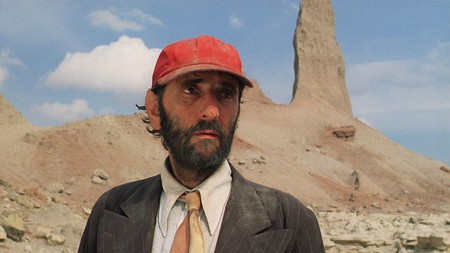 Greenwich Village’s Quad Cinema celebrates the career of actor Harry Dean Stanton, who died on September 15. Does that mean his characters are dead, too, or not?

Wherever he is, “little” Hunter—the sweet blond kid played by Hunter Carson in Paris, Texas (1984)—must be crying. He’d be around forty now and would have probably packed on a hundred and twenty odd pounds, might even have kids of his own. But the tears would surely stream once he’d learned that his father, Travis (Harry Dean Stanton), had died. That’s if anyone had bothered to write and tell him.

Poured out his heart

Hunter won’t have seen Travis in the 33 years since he had dropped the boy off in Houston with his mom, Jane (Nastassja Kinski), that time. But he would recall their road trip and his old man’s smell, woody and dusty with a hint of sandalwood from his shaving cream. There wouldn’t be many words to remember. Even when he was happy, Travis wasn’t big on words. Jane had got him to talk, though. After all their years of estrangement, he had poured out his heart to her on a phone from the other side of a peep-show screen.

This is a way of saying that actors and the characters they are most identified with grow into each over the years. Because Stanton (popularly “Harry Dean,” surname unnecessary) died five days ago, Travis logically died, too, didn’t he? Movies and plays partly exist to blur fact and fiction, to meld the story we’re being told with our inventions—“The best in this kind are but shadows, and the worst are no worse if imagination amend them,” as Shakespeare had it.

It’s hard to imagine a contemporary character going on when the actor who played him or her has gone. Yet movie characters live double lives. Though destined, as humans, to die like their flesh and blood counterparts, they can be constantly revisited living their same adventures in the cinema’s version of eternal return. They’re both mortal and immortal—or will be until the end of the world.

Every time Ry Cooder’s bottleneck slide guitar whines—like pylon wire twanging in a high wind—and immobilizes Travis in the Mohave Desert at the start of Paris, Texas, that stringy buzzard of a man comes painfully and poetically alive. So does Harry Dean. When Cooder serenades Travis driving off at the end of the film, a hint of a smile briefly playing on his lips—the cinematographer Robbie Müller bathing him in sunset and neon red in an over-the-shoulder shot—it’s scarcely an exit, for character or actor. 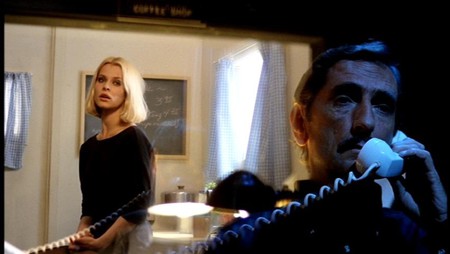 So where has Travis been in the years since 1984? He must have initially headed to another city—Dallas, maybe, or “San Antone.” (Without Jane and Hunter, I don’t see him going to buy up that lot in Paris, in north-east-Texas.) In any case, the question is as idle as asking where the earlier desert wanderer Ethan Edwards (John Wayne) went after he brought his niece Debbie (Natalie Wood) home to live with the Jorgensens at the end of The Searchers (1956), or where Shane (Alan Ladd) went at the end of Shane (1953), if not to Boot Hill?

Haunted men who have no place in a home with loved ones go everywhere and nowhere; occupying the headspaces they occupy, there’s just loss and the prairie or the road, no cottage with roses round the door at the end of the rainbow. There’s no rainbow either. They just “ride away,” to quote The Searchers theme song. They’re always riding away, ghost riders in the ether that subsumes all films after “THE END” or “FIN.”

And Harry Dean? It could be that he’s in a honkytonk somewhere up above, drinking tequila with Sam Shepard, Paris Texas‘s writer, who died on July 27. It was Shepard who got Stanton into the movie in the first place (see video above). It’s sad that they both died—not so sad that one should follow the other after 50 days. Cue Ry Cooder… .