Lady Liberty Is Getting a $10 Million Crowdfunded Museum 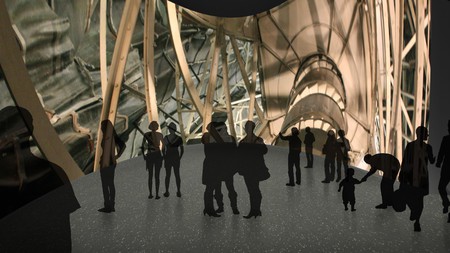 Lady Liberty is set to get her own 26,000-square-foot museum on Liberty Island in 2019—but only if a new crowdfunding campaign can raise $10 million to complete the construction. 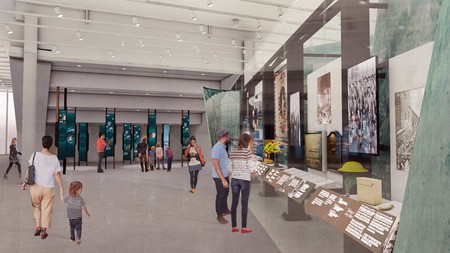 The Statue of Liberty, one of the most democratic symbols in the world, is no stranger to crowdfunding for its upkeep. During the 1880s, publisher Joseph Pulitzer petitioned Americans to help contribute funds for the construction of the nearly 154-foot concrete and granite pedestal. Pulitzer promised to publish donor names in his newspaper the New York World. In 1886, crowdsourcing was used again to raise funds for the statue’s restoration—$6 million alone coming from America’s school children. Now, public support is being called upon once more to support a new venture: a Statue of Liberty Museum. If all goes according to plan, it will open in May 2019.

“The Statue of Liberty belongs to everyone, so we wanted to make sure that anyone who wanted to contribute to this project could,” says Rich Flood, vice-president and chief advancement officer for The Statue of Liberty-Ellis Island Foundation, Inc. “From Pulitzer’s efforts in the 1880s through the foundation’s work in the 1980s, the public has generously supported the statue throughout her history.” 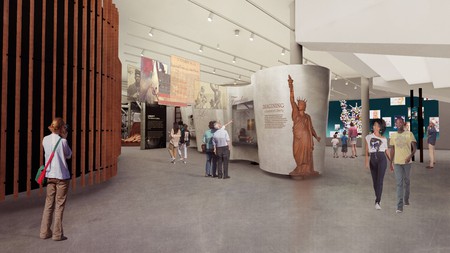 New rendering for the Statue of Liberty Museum | © ESI Design

Designed by architecture firm FXCollaborative, the museum will feature a series of interactive exhibits created by ESI Design. Edwin Schlossberg, principal designer at ESI, says that visitors will “experience a dramatic multimedia event that immerses them in the sweeping story of Liberty—both the statue and the ideals she represents.

“The experience in the Immersive Theater is designed to be a continuous journey,” he says. “As visitors move through three theatrical environments, each segment shows an immersive audiovisual part of the statue’s story.” The design will also include a virtual fly-through, where drone footage is used to recreate the experience of passing through the interiors and exteriors of the Neoclassical structure.

“Only 20 percent of the 4.3 million visitors to the island are able to go inside the statue and we hope this experience will be a great supplement to everyone’s visit,” Schlossberg says. Visitors can also expect exhibits such as Bartholdi’s Sketches and The Statue in Popular Culture, both of which allow visitors to “dive deeper into the details of the design and symbolism of the Statue with engaging, expressive visual interfaces,” Schlossberg continues.

The Becoming Liberty exhibit will showcase a digital photo wall of the museum’s visitors. “Liberty has always been a contested idea with no two people having the same idea…This exhibit will show all the faces of people who have visited and how they thought and felt about Liberty—demonstrating that it has varied meanings for everyone,” Schlossberg says. “These [images will be] shared on an impressive, grand display, making an emotional connection between visitors and the statue.”

The museum will also “celebrate the experiences of millions of immigrants who first encountered the Statue as they arrived in New York Harbor,” Schlossberg adds. Recorded audio interviews of immigrants will provide a “soundtrack to this moment of reflection,” while Emma Lazarus’s poem ‘The New Colossus’ (“Give me your tired, your poor, / Your huddled masses yearning to breathe free…”) will feature prominently as well.

Rich Flood says that while the subject of “immigration is addressed in more depth at the Ellis Island National Museum of Immigration,” the new museum will focus more on the statue’s history and legacy, rather than contemporary immigration issues in the US. Part of that legacy is Liberty’s torch, which will be displayed in the Inspiration Gallery of the museum. “Currently, the original torch is located in the pedestal of the monument and only a small percentage of people are able to view it,” writes Flood. “In the new museum, the torch will be surrounded in a glass gallery and everyone both in and outside the museum on Liberty Island will be able to enjoy it.” 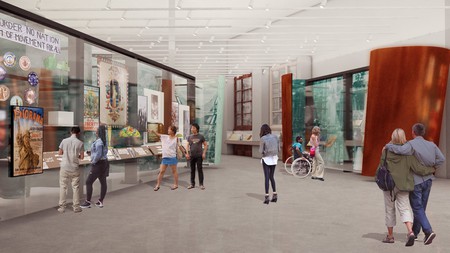 In exchange for their contribution of $18.86 (in honor of the year the statue was unveiled), donors’ names will be included in the Liberty Star Mural. Their names will also be permanently recorded in the digital donors list, known as the Founders Registry.

“Regardless of language or physical ability, [the museum will] give all visitors the opportunity to personalize their experience,” Schlossberg says.

For more information on the Statue of Liberty Museum, or if you’d like to contribute to the project, visit the campaign here.