Has A Tribe Called Quest Progressed Past Writing Hip Hop's Most Homophobic Song? 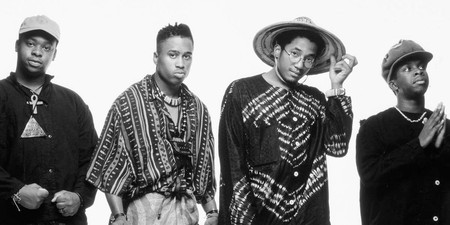 On Friday, Nov. 11, legendary hip-hop collective A Tribe Called Quest released We got it from Here… Thank You 4 Your Service, their first album in 18 years, and their final as a group. Upon first listen, it proves itself another classic release in their discography, as well as one of 2016’s most important, but does it prove that the group has progressed past their unreleased song, “Georgie Porgie,” one of the most homophobic tracks recorded by a popular artist?

When the death of ATCQ founding member Phife Dawg was announced in late March this year, it was like a dagger to the hip-hop community — so sudden, so unprepared. For those who were holding onto the possibility that Phife Dawg would once again enter the studio with Q-Tip, Ali Shaheed Muhammad, and Jarobi White, the dream was all but over in that moment.

And then, in August, Epic Records CEO L.A. Reid announced that there would indeed be a new ATCQ record during his appearance on the Rap Radar Podcast. While Phife Dawg had passed away before the album was completed, he had recorded new verses and for whatever he was unable to finish, Q-Tip said that he left those involved ”with the blueprint of what we had to do.” Outside of contributions by the group’s four members, the album also features an A-list guest list that includes Talib Kweli, Anderson .Paak, André 3000, Kendrick Lamar, Jack White, Elton John, Busta Rhymes, and Consequence.

ATCQ’s accomplishments and place among hip hop’s titans has been documented to saturation; they are some of the most creative and intelligent to ever enter the game. As soon as We got it from Here… Thank You 4 Your Service, their sixth LP, was announced, it immediately jumped to the top of most anticipated lists, bringing life to an otherwise ordinarily hypoxic time — late fall/winter — for album releases. And yet, with this album arriving 25 years after their sophomore standard, The Low End Theory, it’s hard not to feel a bit conflicted in remembering what was almost ATCQ’s legacy: “Georgie Porgie.”

“Show Business,” the sixth track on The Low End Theory, is a snarling critique of labels and the many heads of the music industry, best summarized in the later track, “Check the Rhime,” “Industry rule number four thousand and eighty / Record company people are shady.” But before there was “Show Business,” ATCQ originally submitted “Georgie Porgie,” featuring the same production, as well as all three members of Brand Nubian, with what is probably the most homophobic lyrics written in hip hop, possibly by any popular artist in history. A song written with no other purpose than to be hateful, here are a few examples of its content:

“In the beginning there was Adam and Eve / But some try to make it look like Adam and Steve … Walking in the ville with them long dreadlocks / But on the DL, getting done up the butt box / Oh my God how gross can one be”

“What made you choose the path of the gays, oh why / Ain’t got no reason, to hell with alibis / Won’t play basketball cause your nails ain’t dry / Call me homophobic but I know it and you know it / You’re filthy and funny to the utmost exponent”

“He cipher monkey cipher, you fucking faggot / Couldn’t wait for gay parade so you can drag it / George used to flip, went from hitting skins to sucking nigga’s dick”

“My man George got a germ that’s ill / Suffering from terminal scag / But never ever getting caught walking like a fag … Why a man would want to be a weak cipher man / I thought the plan was to be hard as a rock / Not riding a jock, sucking on a cock”

Thankfully, for everyone’s sake, their label at the time, Jive Records, rejected the track for its content. Further, it has been alleged that “Show Business” is a “vengeful in-joke” in reaction to its denial.

Hip hop’s LGBTQ problem is as deep as its roots in misogyny, and almost every outlet that dedicates even a fraction of its coverage to the genre has produced a think piece on the topic. The problem is far from solved as 2016 comes to a close, but there are reasons to hope that things are moving in the right direction.

Even some artists who were once homophobic or cavalierly dropped homophobic slurs in the past have addressed their prior shortsightedness. In 2005, Kanye West spoke to MTV News’ Sway Calloway about how the concept of masculinity in hip hop and pressures in high school effected him earlier on in his life, altering his outlook on the gay community. However, once he found out that one of his cousins was gay, his perspective shifted quickly. West then used the interview to make a statement to all of peers.

“As a matter of fact the exact opposite word of hip-hop is gay,” West said. “Like yo, you play a record and it’s wack? That’s gay, dog. If it’s good? That’s that hip-hop shit right there! It’s the exact opposite. So me speaking for my entire culture, me looking at my rappers out there, hip-hop does discriminate against gay people. I want to just come on TV and tell my rappers, my friends, just stop it, fam. Seriously, that’s really discrimination. To me, that’s what they used to do to black people. I’m trying to tell people to just stop all that.”

Jay Z, who has used terms like “faggot,” “fag,” and “gay” (negatively) throughout a number of his albums, but was one of the first in the genre to support President Obama’s endorsement of gay marriage. Speaking with CNN, Jigga said, “It’s no different than discriminating against blacks. It’s discrimination plain and simple…I think [announcing support of gay marriage is] the right thing to do, so whether it costs [Obama] votes or not — again, it’s not about votes. It’s about people. It’s the right thing to do as a human being.”

Common, who brandished lyrics like Jay Z’s, pledged to stop using gay slurs in his songs in 2011 after listening to the concerns of some of his gay fans, stating that he never intended them to be offensive.

So, where does this leave us with ATCQ? How do we judge their legacy in light of “Georgie Porgie”? Can we separate art from the artist, and if so, where do we draw the line? Can we chalk it up to a difference of times? Would there be the same demand for We got it from Here… Thank You 4 Your Service if the song had made the cut back in 1991? If this song was written today, in the age of social media, how would a young ATCQ’s career unfold?

As someone who believes in penance, it’s always been a bit disheartening that the members of ATCQ have yet to address “Georgie Porgie.” Unfortunately, we will never be able to get an answer from Phife Dawg, but one would hope that Q-Tip and Muhammad (after the group’s debut album, Jarobi left to study culinary art) would be willing to discuss this unfortunate stain on their otherwise pristine career if it is no longer representative of them.

On the other hand, one of the song’s featured artist Lord Jamar proudly wears his “alpha conservative” crown. Speaking with The New Yorker, Jamar said that “beta males” like Macklemore, Kanye, Drake, and Chance the Rapper are driving hip hop “right off the fucking cliff” with their “corny statement songs” endorsing gay marriage and eschewing “traditional masculinity” that is at the “core of true hip-hop.” The feature concludes by noting Jamar’s critique of Le1f’s performance on “The Late Show With David Letterman,” having tweeted out “THIS IS JUST THE BEGINNING!” Shortly after, Le1f provided the perfect response on his Facebook:

“Choose your battles. If the whitening of rap is a concern to you, please leave my name out of it. If you think being gay is the same as being white, you are as ignorant as your enemies. I’m darker than you. I’m african. I’m a black man and I experience all the same racism you do, if not more, on top of homophobia, including from black men just like you. Are you proud of being a hateful member of a majority? Rap started out as a creative response to oppression, and no matter my outfit, I know oppressions you will never understand.”

Setting aside apologies, one track off We got it from Here… Thank You 4 Your Service seems to support that the group’s outlooks have matured. Targeting the recent turmoil of the United States, Q-Tip raps the following lines on the hook of the album’s second track, “We The People…“:

There’s no shortage of politically charged moments on We got it from Here… Thank You 4 Your Service. Q-Tip, Jarobi, Phife Dawg, and all of their guests don’t mince words, their lyricism matching the weight of the group’s sendoff. But it’s these five lines at the album’s onset that matter the most; a mission statement laid out without any room for confusion.

It would be foolish of us as fans to expect any artist to directly fight for every, or really any, issues that they don’t feel strongly about; it isn’t their job. But when someone asks for equality on one issue and, in turn, diminish another’s fight against injustice, it compromises their call to action. We still don’t know the full depth of ATCQ’s views on LGBTQ issues, but we do know that they have changed so much as to include and elevate all of the oppressed, and in light of the events of this past week, putting an end to such divisions has never felt more important.

Culture Trip has reached out to A Tribe Called Quest’s team to discuss the topic, but has not received a response as of print. You can listen to “We got it from Here… Thank You 4 Your Service” below.