Your Guide to Greenwich Village in the Movies

Downtown Manhattan’s most iconic neighborhood means wealth to some people and Bohemia to others. Moviemakers have looked at it from all angles.

In Greta Gerwig’s Lady Bird—one of 2017’s best films—the title character played by Saoirse Ronan happily drags two large suitcases out of the West 3rd Street subway stop. She has achieved her dream of leaving Sacramento for college in New York and has arrived in just the right place: the heart of Greenwich Village.

With that step, Lady Bird joins a rich group of film characters who have gravitated to the neighborhood over the years, including a 19th-century heiress, folk singers in dingy 1960s cafes, even a stampede of zombies. 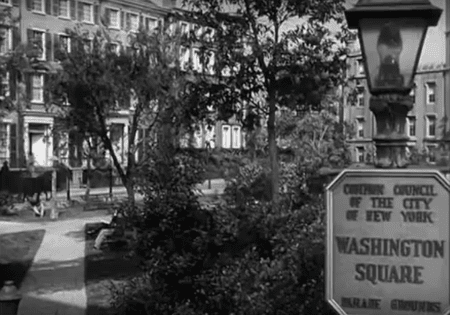 An establishing shot from ‘The Heiress’ | © Paramount Pictures

Whether shot on location, as Lady Bird was, or thousands of miles away, Greenwich Village on screen has always been as much an idea as a neighborhood. The ideal has morphed from the elegance of the upper class to a haven for Bohemian artists, poets and singers, but it has always stood for the unconventional.

In William Wyler’s 1949 classic The Heiress, based on Henry James’s novel Washington Square, Olivia de Havilland is Catherine Sloper, the wealthy but meek young woman courted by a gold-digging suitor, Morris Townsend (Montgomery Clift). In their day, the 1830s, the Slopers’ address at 16 Washington Square North, on the perimeter of Washington Square Park, was in an impressive but newly upscale area.

The film, which plays remarkably well today as a story of a young woman finding her voice at a terrible cost, was shot on the Paramount lot in Hollywood, and it looks studio bound. But it recreates the rows of graceful Georgian townhouses that lined the park, and still do on the north-east side. Today, those houses are a mix of New York University buildings and doctors’ offices, but if you ignore the window air conditioners you can preserve the 19th-century illusion.

Will Smith at 11 Washington Square North in ‘I Am Legend’ | © Warner Bros. Pictures

There is actually more authenticity in I Am Legend (2007), an efficient thriller with Will Smith as a scientist immune to a virus that turns most humans into zombie-like creatures. You can walk by his house at 11 Washington Square North, the exterior of which was used in the movie. The address is perfectly located for the film’s highlight, when the zombie-creatures run rampant through the park (authenticity only goes so far) and under the iconic Washington Square Arch.

The park, with that camera-friendly arch, long ago became shorthand for Bohemia. In Fritz Lang’s 1945 Scarlet Street, Edward G. Robinson is an amateur painter who destroys his life for a younger woman (Joan Bennett). “Take this junk back to Washington Square where you got it,” an art dealer sneers when shown his paintings. “The Village longhairs are selling those for the price of the canvas.”

Although Scarlet Street was shot in a Hollywood studio, it is entirely believable when Robinson loses his bearings and says, “These streets are all mixed up in Greenwich Village.” Breaking with the grid structure of so many Manhattan neighborhoods, the Village’s twisting streets famously include a spot where West 10th and West 4th Streets intersect, a perfect metaphor for the way creative Village residents break the social rules. 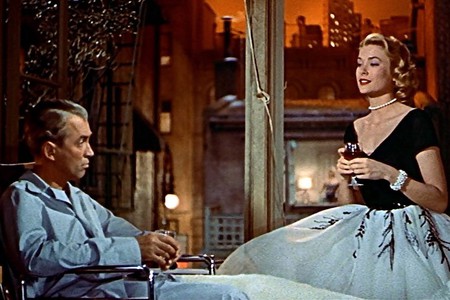 A Village address resonates in one of the best movies ever made, Alfred Hitchcock’s Rear Window (1954). As a photographer with a broken leg, James Stewart looks out his window at a courtyard full of Village life: a songwriter, a dancer, a possibly murderous salesman. Hitchcock shot on a studio set, but Stewart’s address—a fictional spot on West 9th Street—suggests the distance between his life and the Park Avenue glamour of his girlfriend, played by Grace Kelly.

In Barefoot in the Park (1967), which stars Robert Redford and Jane Fonda as newlyweds, Redford’s character walks drunk and barefoot in Washington Square Park after a spat, a sign that his straight-laced character is loosening up. The Neil Simon screenplay is creaky, but it’s a delight to see Redford and Fonda in their first film together.

A mock-documentary about Rollins, set in that period, begins with black-and-white footage of coffeehouses and a comically out-of-step voiceover that intones, “Greenwich Village, once the in-spot for beatniks, jazz, and bebop, is today home to the popular folk music fad.” 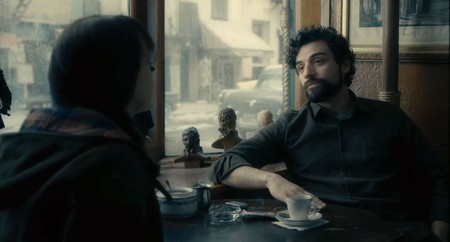 That film was shot in Montreal, but the Coen Brothers stayed in New York when recreating the ’60s for one of their best films, Inside Llewyn Davis (2013), starring Oscar Isaac as a singer-songwriter who might have rivaled Dylan. You can visit the cafe where Llewyn’s angry sometime lover (Carey Mulligan) tells him what’s wrong with his personality and his life: it is Caffe Reggio at 119 MacDougal Street, which looks as if the Coens did very little to make it look 50 years old.

The Village image remains strong in recent films, including Rebecca Miller’s smart romcom Maggie’s Plan (2015). Greta Gerwig plays an administrator at the legendary, hip New School. Plenty of scenes were shot in and around one of its buildings on West 12th Street, where Maggie meets a writer (Ethan Hawke) who teaches ficto-critical anthropology. 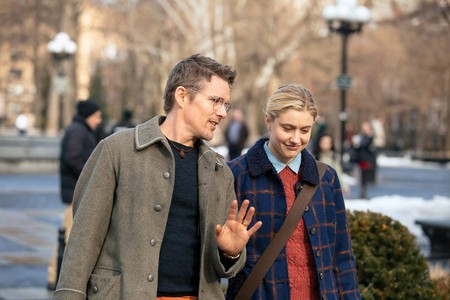 It can be great fun to spot New York locations on screen then walk out the theater door into a real-life movie set, and the Village has places to do just that. If Lady Bird had looked directly across the street when getting out of the subway, she would have spotted the IFC Center (323 6th Avenue), a prime theater for catching new independent films.

A few blocks south, where the Village borders SoHo, is Film Forum (209 West Houston Street) still flourishing after nearly 50 years and showing new releases and some of the best repertory programs around.

And at 34 West 13th Street is the Quad Cinema, which reopened in 2017 as a completely renovated, technologically up-to-date space presenting new indie films and repertory series. If only one of these theaters could show my dream project: Lady Bird, Catherine Sloper, Llewyn Davis, and all their neighbors talking to each other in one great Village movie.