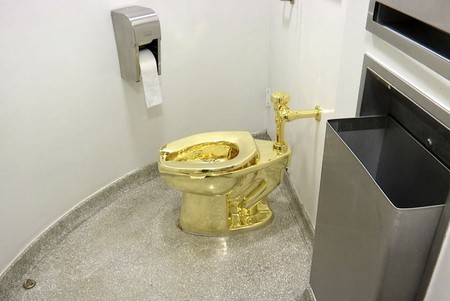 The White House’s request for a long-term loan is pretty standard practice, but the Guggenheim’s response to President Trump’s desire for Vincent van Gogh’s Landscape with Snow (1888) is… not. In an email declining the van Gogh loan, the museum’s artistic director and chief curator Nancy Spector offered an alternative: a solid gold toilet titled America.

Maurizio Cattelan’s America graced the Guggenheim Museum from September 2016 through September of last year. The artwork, a toilet cast in solid 18-karat gold, is a satirical wink at the excesses of America’s one percent (as regularly exemplified within the art market); yet the irony, as Cattelan has explained, is that “whatever you eat, a $200 lunch or a $2 hot dog, the results are the same, toilet-wise.”

#MaurizioCattelan’s “America,” a working toilet cast from gold, has been on view—and available for use—in one of the Guggenheim's single-stall public restrooms for almost one year. More than 100,000 visitors have had a one-on-one encounter with “America,” and we’re offering a giveaway to experience the last moments with the work before it closes to the public on September 15. The prize includes entry for two to the museum on September 15, and private access to the work from 5:30-5:45 pm, plus an exhibition poster and copy of the “Maurizio Cattelan: All” catalogue. To enter, tell us your most intimate moment with a work of art in a comment below. __ *Contest ends on Friday, September 8, 12 pm EDT. Winner must be in New York City on September 15. Full terms and conditions at: guggenheim.org/terms-conditions/social-media 📷Kristopher McKay #Guggenheim #Giveaway

The gilded sculpture garnered heaps of attention throughout the last year, but since mid-September it’s been in storage. And when Nancy Spector received an email from a White House representative requesting Vincent van Gogh’s Landscape with Snow—a dreamy winterscape depicting a man with his dog—for exhibition in President Trump’s private living quarters, Spector saw a golden opportunity.

We're welcoming the beginning of winter with Vincent van Gogh's "Landscape with Snow" (1888) from our collection, and dreaming of a snowy New York City this holiday season. ❄️ #WinterSolstice __ #Guggenheim #GuggenheimCollection #vanGogh

In an email back to the White House’s Donna Hayashi Smith, Spector explained that the Guggenheim is “unable to participate in this loan since the painting is part of the museum’s Thannhauser Collection, which is prohibited from travel except for the rarest of occasions.” But it just so happened that on that very day, America was finishing its year-long run at the museum.

“Fortuitously,” Spector offered, “a marvelous work by the celebrated contemporary Italian artist, Maurizio Cattelan, is coming off view today… and he would like to offer it to the White House for long-term installation.” The artwork, she added, is “a solid, 18k gold toilet that was installed in [the museum’s] public restrooms for all to use.”

Spector has been outspoken against Trump since his election, and her email to the White House has since garnered headlines for weaving weapons-grade sass into an otherwise professional note. As The Washington Post pointed out, it wasn’t a bad suggestion, either. “On the face of it, President Trump might appreciate an artist’s rendering of a gilded toilet, given his well-documented history of installing gold-plated fixtures in his residences, his properties and even his airplane.” That said, “the president is also a self-described germaphobe,” but Spector probably knew that too.

While Maurizio Cattelan has said that America was inspired by multiple sources—in a Guggenheim blog post, Caitlin Dover notes the obvious reference to Marcel Duchamp’s Fountain (1917), as well as Cattelan’s fascination with the toilet as a symbol and a “vessel”—it’s impossible to avoid making a direct connection between the sculpture and President Trump. Indeed, he is “another layer,” Cattelan admitted, “but it shouldn’t be the only one.”