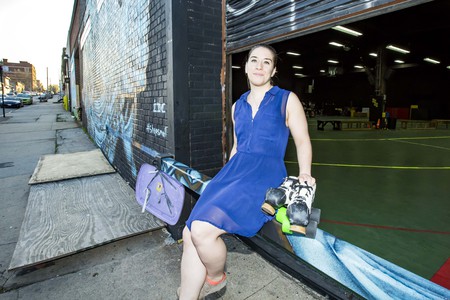 Lauryn Tacoronte wrestled at Curtis High School in Staten Island, N.Y. Being the only girl on an all-boys team wasn’t easy.

“It was very discouraging at first,” Tacoronte said. “There was no one who was an example to be like, ‘You can do this. It’s okay to do this. It’s OK to get aggressive and get sweaty and dirty.’”

Today, as a member of the Gotham Girls Roller Derby, Tacoronte isn’t short on female role models or motivational people in her life.

Gotham Girls Roller Derby is a non-profit women’s roller derby league comprised of eight teams based in New York City, and is a five-time Women’s Flat Track Derby Association (WFTDA) World Champion. The league is ranked second in the world out of 399 full-member leagues and 50 apprentice leagues. There are leagues in the United Kingdom, Sweden, Australia (Victorian Roller Derby League is currently No. 1 in the world), Argentina, Germany, Japan and countless other countries.

“It’s really incredible to watch women be aggressive and play a contact sport, especially when it’s being broadcast on places like ESPN3,” Tacoronte said. “I think it’s really awesome and a good example for young girls and people in general to be able to be aggressive, confident and play sports, and at the end of the day, these are your teammates and you’re all friends. You learn so many good things playing sports.”

Tacoronte first heard about roller derby and Gotham Girls through a teammate of hers when she was playing rugby at Fordham University. After graduating, there was a void in her life without sports. Going to the gym was too repetitive and boring. She longed for the camaraderie of a team sport. She eventually went to see her friend play roller derby.

“The second I saw it, I knew I wanted to play,” Tacoronte, 31, said. “I loved the athleticism, but also the fact that it’s a female full-contact sport. It’s not often you get a contact sport that isn’t dulled down in some kind of way when it’s a female-only sport.” 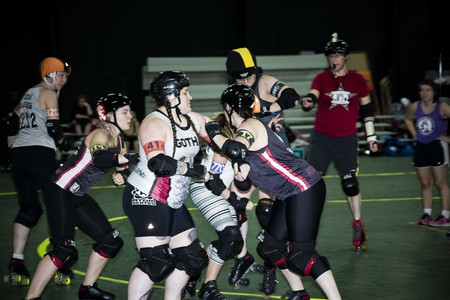 Tacoronte bought a pair of roller skates a week or so after watching her friend play. She went to the Gotham Girls’ two-week bootcamp for potential skaters, tried out for the league and made it. She’s currently in her eighth season, having played for the Brooklyn Bombshells and Wall Street Traitors. While a lot of time and effort is needed to play for the Gotham Girls, it isn’t a full-time job, especially since none of the skaters earn a salary. Tacoronte, like all other skaters, has to find the balance between her day job as a mechanical engineer and her night job as “Lady Fingers” on the track.

“All other times of the day I’m Lauryn, but when I’m here, I’m Lauryn and also ‘Lady Fingers’ and I can get out any frustrations from the day here,” Tacoronte said. “It’s exciting to be skating for this long and it has really been a great journey. I love roller derby. I’m going to continue to do it until either some major life event or I just can’t walk anymore.”

Culture Trip: What is your favorite part of roller derby?

Lauryn Tacoronte: It’s the strategy. I really love the fact that it’s a game that’s ever-changing and at any moment you have to be prepared to play offense, then defense, and constantly be working your brain and rethinking what’s going on out on the track while trying to execute the most efficient play you can, while keeping an eye out for someone trying to nail you. I really like the strategy and the fast-paced nature of the game in general.

CT: What are some misconceptions about roller derby?

LT: I think there used to be a lot of misconceptions that it was this kind of WWE-esque sport where we wore fishnets and tutus or whatever. Some people still do those things, but people recognize that the sport is real and it’s real athletes doing really incredible athletic things. When you tell people you play roller derby, they get excited and usually say “I used to watch it on TV and they would elbow people in the face. Do you elbow people in the face?” and I’m like, “No, not really. There’s no sport you can elbow someone in the face besides like Muay Thai.” I think they think it’s more theatrical than it is because it has roots in that, but now it’s more of a lucrative sport.

LT: My brother helped me. We were trying to think of the most ridiculous names possible and it was part of a very long list. We thought, what’s fun about this is you can flip the bird, I like cookies, whatever innuendo you want. You can take it however you want. It has a little mystery to it. I used to have a giant foam finger I would sometimes skate out with, but it’s gone.