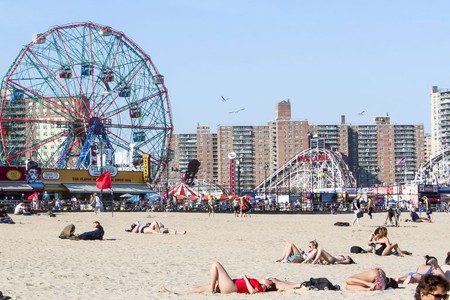 Coney Island feels like a town ripped out of time. The boardwalk, the beach, the hotdog eating contests – and the freak show – all make it feel like a Victorian-era British seaside resort injected with American charm. One of the symbols of the neighborhood is the Cyclone roller coaster, one of the oldest in America still in operation, and the attraction marks a rich history in stomach churning, neck cracking, thrill-seeking rides at Coney Island.

Coney Island’s first hotel opened in 1829, and by the time the civil war was over in 1865 the area was an established resort, boasting theaters, restaurants, and a race track. The first hot dog is said to have been invented at Coney Island in 1867, a precursor to one of the most famous hotdog makers in America, Nathan’s, which opened as a nickel hot dog stand in 1916.

On June 16 in 1884, before the hot dog, the boardwalk, or even Coney Island’s first amusement park opened, what could be described as the first roller coaster in America opened. The reason for the ambiguity is because the legitimacy of the claim depends how you define a roller coaster. The ride was known as a Switchback Railway, and traveled around six miles per hour. 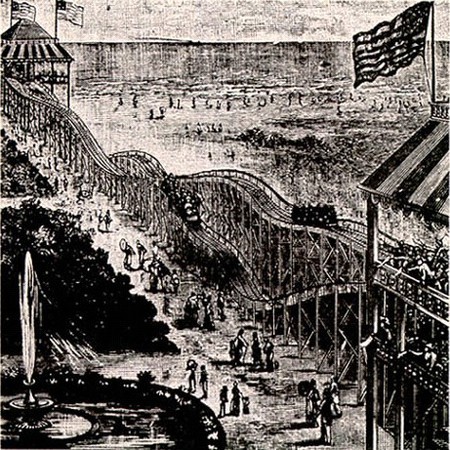 The Switchback Railway in 1884 | Wikicommons

The Switchback Railway was the first of a series of rides known as Thompson’s Scenic Railways. Passengers would climb up stairs and ride a gravity-powered cart down the tracks, facing outwards instead of forwards so they could enjoy the scenery, according to Heart of Coney Island. When the cart reached the bottom, it would be pushed up a separate set of tracks manually, so passengers could ride back to the starting point while facing the opposite direction.

After the first ride was opened, the competition quickly grew. In 1895, Captain Paul Boyton, a world famous aquatic daredevil who traveled the world’s rivers in an inflatable rubber suit, opened what may be the first modern day amusement park. Sea Lion Park followed the same model that is used today – to have a collection of rides enclosed within walls and charging one entry fee.

One of the standout rides at Sea Lion Park was the Flip Flap Railway, the first looping roller coaster. The only problem was the use of a perfectly circular loop, which meant it subjected passengers to g-forces similar to driving a car straight into a wall. As a result, many people are said to have passed out, and more people ended up watching rather than actually riding the coaster. 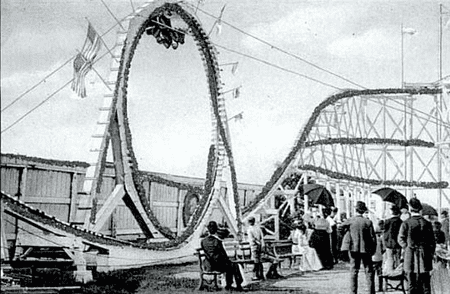 After a rainy summer in 1902, Boyton sold the park to new owners, who would set up Luna Park, one of the most influential amusement parks of all time. Luna Park burned down in 1944, but the current largest amusement park Coney Island is also called Luna Park, and is the home of perhaps the country’s most famous roller coaster – the Coney Island Cyclone.

From 1884 through to the 1930s, more than 30 roller coasters were built at Coney Island. One of the largest was The Giant Racer, built in 1911. To increase revenue the coaster was moved on rollers in 1916 to put it closer to Surf Avenue. In 1926 it was torn down to make way for the Coney Island Cyclone. 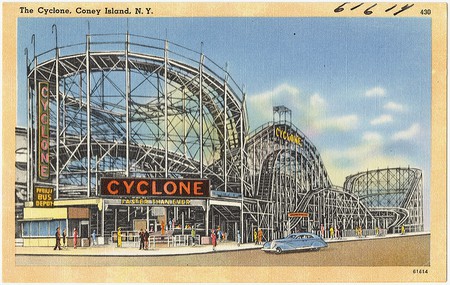 An old postcard of the Cyclone | © Boston Public Library/ Flickr

The Cyclone was built in 1927 on the same site as the original Switchback Railway. Harry C. Baker and Vernon Keenan built the roller coaster for a reported cost of $100,000. In 1969, New York City bought the land The Cyclone is on and the coaster itself for $1.2 million, and leases it out.

The ride is one of the only remnants of Coney Island’s thrill-seeking heyday. None of the major amusement parks survived past the 1960s, either due to economic struggles or fire. But the Cyclone, which still has a wooden track, remains. There have been plans to replace or destroy it over the years, but the city has always stepped in to save it. In 1991, the Cyclone was listed on the New York State Register of Historic Places. It seems the old roller coaster will continue to terrify and entertain visitors to Coney Island for some time yet, and provide a striking reminder of the neighborhood’s colorful history.