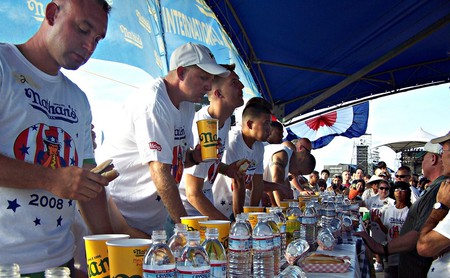 Takeru Kobayashi took the competitive eating circuit and world by storm when “the Tsunami” wolfed down a record 50 hot dogs (and buns), doubling the previous record, at the 2001 Nathan’s Hot Dog Eating Contest on July 4. Kobayashi set the record three times while winning the event, held in Coney Island, from 2001-06.

What made his impressive competitive eating skills and dynasty all the more impressive was that Kobayashi wasn’t large in stature; he is 5-foot-8, 128 pounds.

Size isn’t necessarily the name of the game when it comes to competitive eating. Competitors, especially today, rely on intelligence, technique, and innovation to come out on top.

“Competitive eaters have gotten a lot smarter,” said Yasir Salem, ranked No. 11 in Major League Eating. “Kobayashi revolutionized the way you ate hot dogs and buns. Those are the things you see a lot more of this day; a lot more innovative and smart eaters who come up with new ways of hacking a particular type of food.”

Salem devised a faster way to eat corn on the cob, resulting in setting the then-world record of 47 ears of corn consumed at the 2016 Sweet Corn Eating Championship.

Not only are the innovative new techniques used during training and competition changing the game, but competitors themselves are evolving as well. Training, diet, and exercise are becoming more refined and almost similar to athletes of mainstream sports. Competitive eaters aren’t sitting around the dinner table stuffing their faces with hot dogs, pies or donuts anymore. They’re running marathons, lifting weights, smartly counting calories.

Salem is an ideal example. The 40-year-old who lives in New York City not only is a competitive eater, he is a marathoner, cyclist, and triathlete. Salem has run one marathon during each month in 2017, works out twice per day, cycles to and from work, and eats salads for lunch. 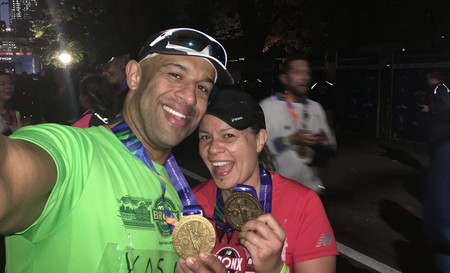 “Eaters have become extremely fit,” he said. “The general physical fitness of these eaters is head and shoulders above eaters of years past.”

MLE’s top-ranked Joey Chestnut, who has dominated the circuit since dethroning Kobayashi in 2007, runs regularly. Geoffrey Esper (No. 4 in MLE) loves to deadlift. Miki Sudo (No. 5), the reigning female Nathan’s Hot Dog Eating Contest champion, is an avid gym goer. Gideon Oji (No. 6) played NCAA basketball. Juan Rodriguez (No. 12) is a personal trainer. Sarah Reinecke (No. 36) is a female bodybuilder.

With more and more money available on the circuit and at these contests, as well as sponsorship opportunities growing, competitive eating has become more appealing, resulting in better competition.

“The incentives are high enough to attract people who are going to give it their all,” Salem said. “That’s why I think the improvements have happened. It’s not a big man’s game anymore. It doesn’t help for you to be a big guy. You have to have really good cardio fitness, understand what goes into your body, what you’re going to do with it, and you have to be very diligent about your training.”