Books Are Magic, Brooklyn's Newest Bookstore, Is Open for Business 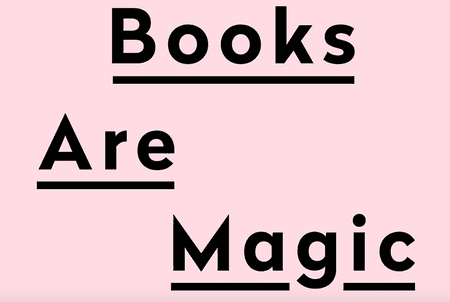 Courtesy of Books Are Magic store

The Cobble Hill-based shop was opened by writer Emma Straub and her husband Michael Fusco-Straub.

In December, after the closing of the beloved Brooklyn bookstore BookCourt, the Cobble Hill neighborhood was left without a literary merchantry. As of May 1, that void has joyously been filled.

Together with her husband Michael Fusco-Straub, the novelist Emma Straub, author of The Vacationers and Modern Lovers has opened Books Are Magic, Brooklyn’s newest bookstore.”We live in the neighborhood,” Straub told CNN, “and when BookCourt closed, we needed a bookstore to walk to—and we knew everyone else here did, too.”

Books Are Magic, which opened its doors on May 1, is situated mere blocks from BookCourt’s old location, is comprised of two large, charming rooms of many shelves and minimal design, with many books laying cover up on large tables. Among its most noticeable features are the neon and handpainted signs logos as well as a sun-soaked event space. Included in its mission in serving the literary needs of its community is to highlight local writers. 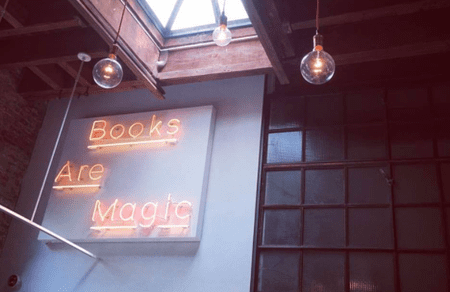 Photo courtesy of Books Are Magic

“We want to celebrate the fact that we have a lot of homegrown talent,” she told CNN. “We are going to have a little sign up by the register that says, ‘Are you a local Brooklyn author? Please identify yourself so that we can make sure to carry your book.’ I know what Martin Amis looks like, and he lives nearby, so we’ll get his books, but there are a lot of other people who I may not recognize.”

“What makes indie bookstores so special is that each one is totally unique,” Straub told the writer Emily Temple in an interview published by LitHub. “Even though we’re all ordering from the same publishers for the most part, each space is totally its own, and each point of view, as well. I could go to a dozen indie bookstores in a day. They are each a total kingdom. That’s why they’re thriving—they’re living, breathing creatures. You wouldn’t swap your cat for a robot, even though the cat sometimes eats your hair and then barfs on the rug. It’s the same thing. I would rather have an eccentric, fallible thing with a soul. Wouldn’t you?”