The Best Hotels to Book in Albany, New York, for Every Traveler 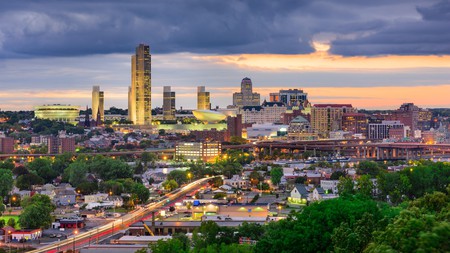 Albany, the state capital of New York, offers plenty of diversions for history and politics buffs – a superb overview of the state can be found at the New York State Museum, while centuries of politics and art collide at the Empire State Plaza. These elegant, historic hotels and B&Bs are the best places to stay in Albany while exploring its twin pillars of heritage and culture. Pick your favorite and book with Culture Trip.

The Century House, Ascend Hotel Collection, for character and charm 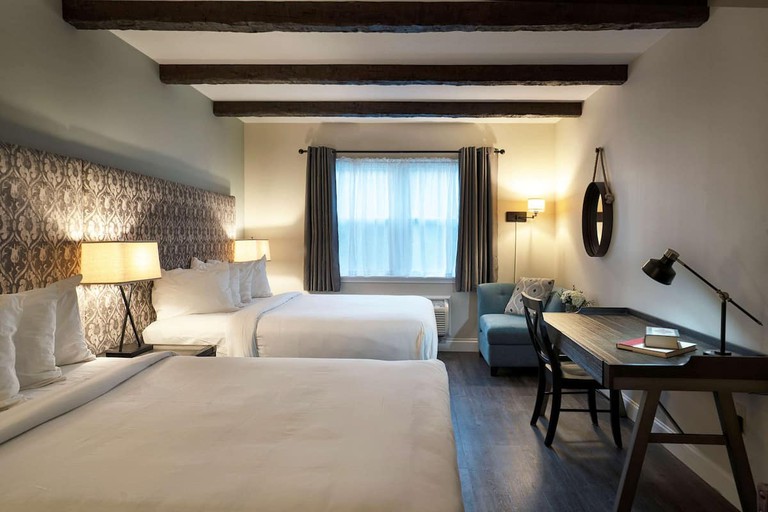 While this Albany luxury hotel is connected to the Convention Center, the individually designed rooms are anything but business-like, with charming beams, fabric headboards and adjustable lamps. Minutes from downtown Albany, known for its foodie scene, you could just as easily cozy up at the hotel’s restaurant, savoring the prime rib and lobster it’s known for. In good weather, you can take a dip in the tree-fringed seasonal outdoor pool or lace up those hiking boots and follow the scenic trails in the surrounding countryside. 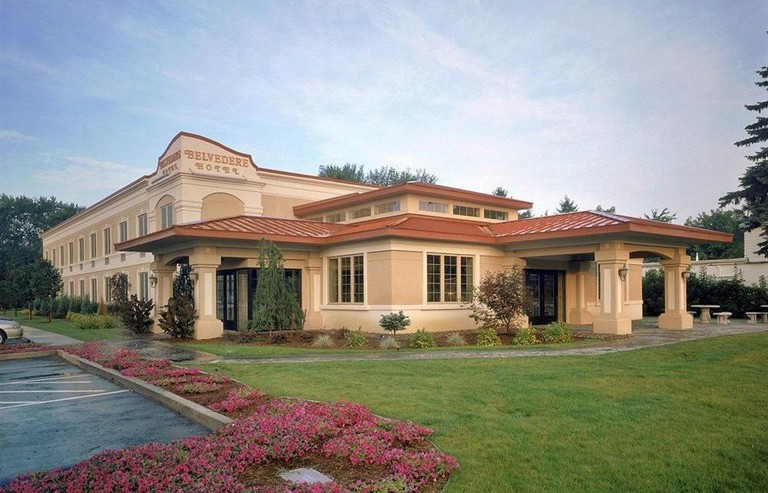 This upscale, sand-colored inn puts you six minutes by car from Schenectady cultural venues including Proctors Theater, the Civic Playhouse and the County Historical Society Museum, and about 20 minutes from downtown Albany. It’s hard not to relax in traditional rooms and suites bathed in muted shades of coffee brown decor; most have a city view. Chew the fat over a complimentary coffee in the inviting lobby, lined with art and plenty of houseplants or soak up the sun in the flower-filled grounds. 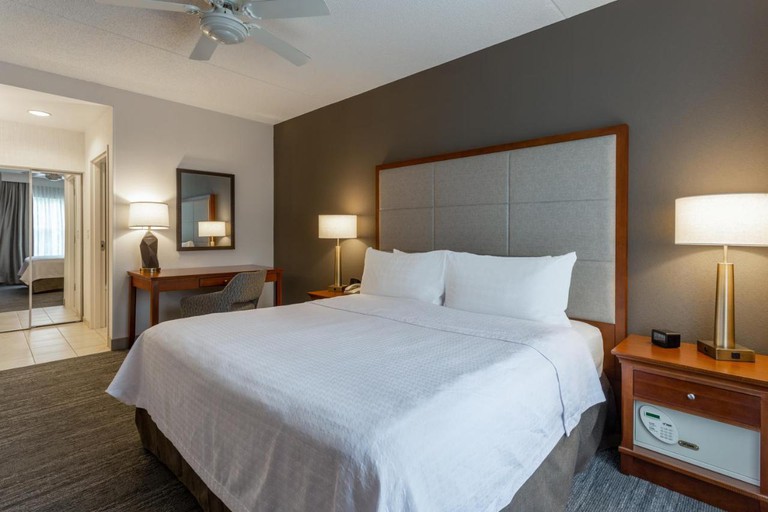 The “home” in the hotel name applies perfectly to these suites you can cozy up in, with sink-into sofas and soft armchairs. Cook your favorite meals in kitchens lined with all you need. If the weather’s good, you can grill your lunch or dinner on the barbecue. As hotel locations go, this is one of the best, with multiple sights including the State Capitol Building close by, and that all-important airport.

Olde Judge Mansion B&B, for stepping back in time

Fans of Victorian-Gothic style architecture will love this relaxing red-brick home 1mi (1.6km) from the center of Troy. This is the time to put that cell phone down, with a game or two of poker in the dedicated room, or a tinkling of the ivories in the parlor. The five rooms channel old-style charm with metal beds, tongue-and-groove details and more than a hint of floral fabrics and frilly window dressings. You must make the 30-minute drive to Saratoga Springs, home to natural hot-spring spas, locally brewed beer and the famous racetrack for placing the odd bet or two. After a busy day, curl up on the Victorian fainting couch with a soothing cup of tea.

Marriott Albany, for a choice of pools 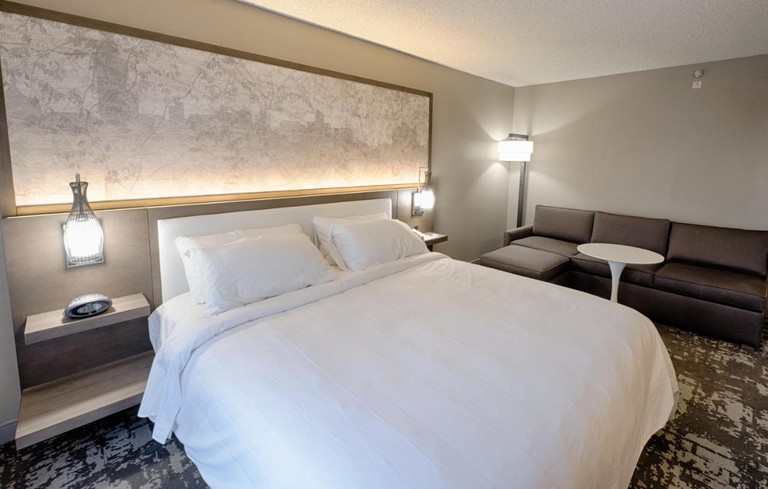 Top marks to this hotel for tipping its cap to Albany in rooms with canvas likenesses of the New York state capital skyline. Subtle is the word here, with soft gray-brown tones on walls, floors and furniture, with the odd pop of bright white here and there. The Wolf Road location means you’re close enough to shops and restaurants for even the longest of stays, once you’ve sampled the hotel’s craft cocktails and all-American breakfasts. You can swim or splash off the indulgence in the indoor and outdoor pools. When it’s time to leave, jump on the complimentary 3mi (5km) shuttle ride to Albany International Airport.

The Desmond, for a red-brick retreat 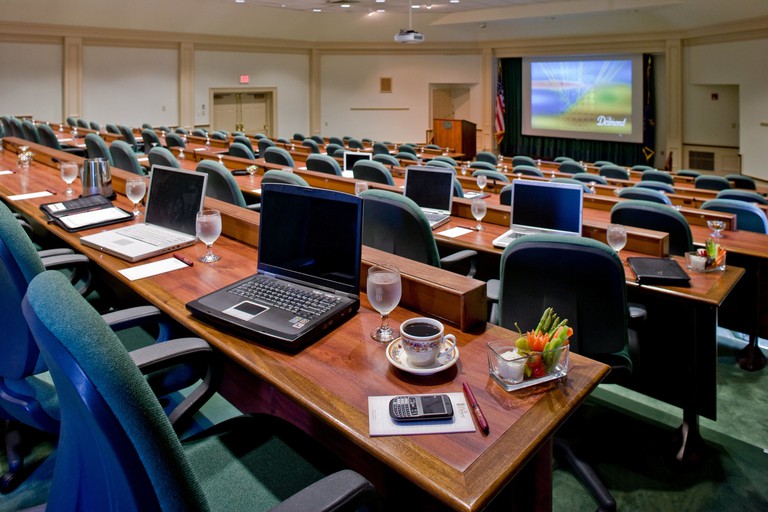 Courtesy of the Desmond / Expedia
Housed in an attractive red-brick building, the Desmond combines a traditional Albany look with a convenient location near the airport. Rooms are tasteful and have a classic feel, while the pub-style Tavern is a cozy spot to relax with a pint and some classic English fare – the bread pudding here is so famous they’ve had to publish the recipe, to save writing it down for so many impressed customers. 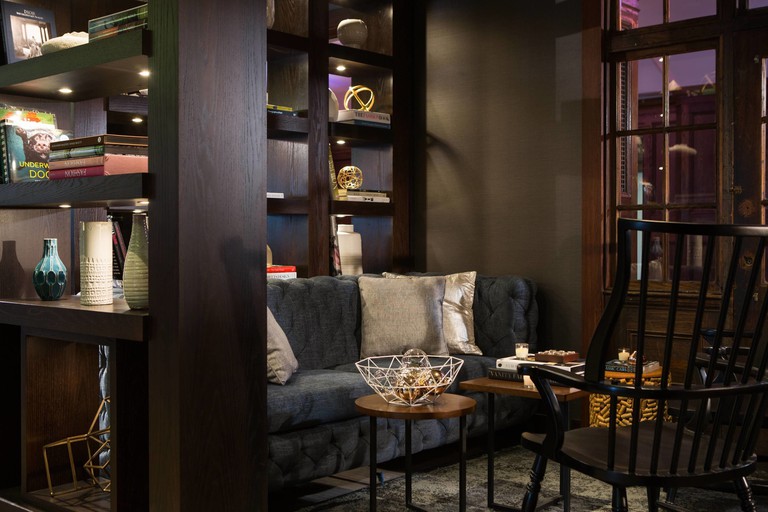 Courtesy of Renaissance Albany Hotel / Expedia
Overlooking the manicured lawns of East Capitol Park, you can’t get much closer to Albany’s political heart than the Renaissance. The grand exterior and common areas fit in well with the rarefied surroundings, while the rooms are a little more modern and relaxed. The chic dining room, Wellington’s, is justifiably popular with locals, while landmarks such as the State Capitol and New York State Museum are a short stroll away.

The Morgan State House, for staying in style 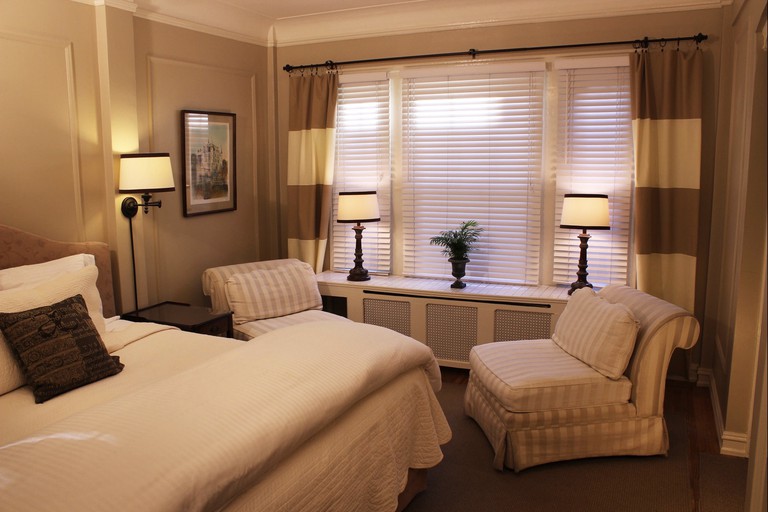 Courtesy of the Morgan State Hotel / Expedia
This image-conscious boutique hotel in Albany describes itself as “the ultimate urban inn,” and when you’re relaxing on the garden patio, surrounded by greenery with a glass of wine in hand, you’ll be hard-pressed to disagree. Each room is different – they span kitchenette studios, deluxe kings with views over Washington Park and even a skylit studio once occupied by the famous sculptor Alice Morgan Wright – but all share an elegant Old World aesthetic.

The Glen Sanders Mansion, for a historic hotel 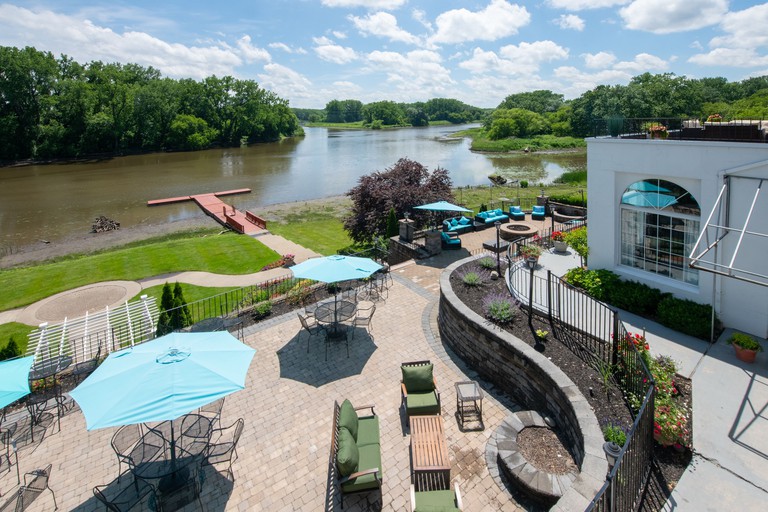 Courtesy of the Glen Sanders Mansion / Expedia
Even by the standards of Schenectady, Glen Sanders Mansion is old; having stood for more than 300 years, it retains much of its historical charm, and it’s easy to see why it’s a popular wedding venue. From the chandelier-lit lobby, a sweeping staircase leads up to elegantly traditional rooms, some of which have beautiful views over the nearby lake and the Mohawk River.

Oakcliff Bed and Breakfast, for a presidential trip 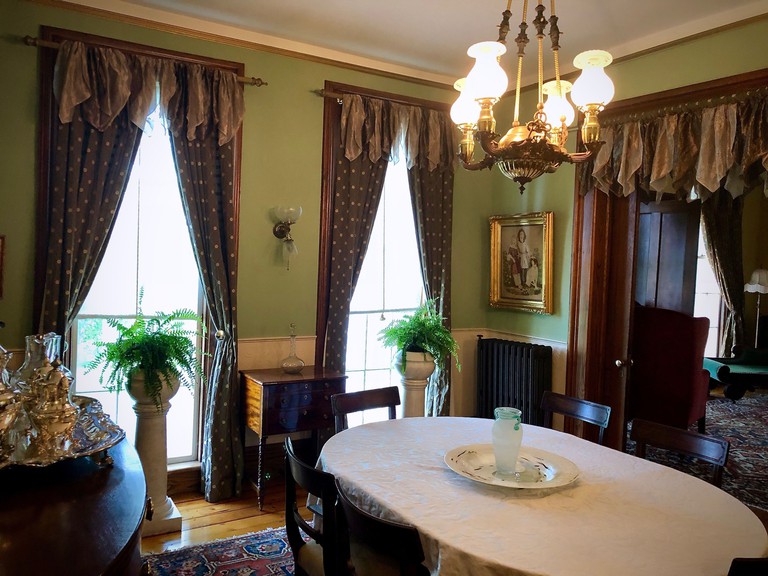 Courtesy of Oakcliff Bed and Breakfast / Expedia
Welcoming you in through its grand Greek revival pillars, Oakcliff impresses from the get-go – and it doesn’t let up once you get inside, with maximalist rooms adorned with rich, dark furniture and plush Persian rugs. Relax with a whiskey in the homey parlor to the soundtrack of a vintage self-playing Steinway, and you’ll understand why no fewer than four former presidents have chosen to retreat here over the decades.