Martin Scorsese’s 1976 masterpiece Taxi Driver depicted Times Square as a village of the damned. It doesn’t look that way anymore.

Walk around Times Square today and you feel relatively safe and unsullied, even at night, despite the dazzling video ads with their relentless hard sell. (You should still keep a grip on your bag or feel the pressure of your pocketbook.)

Back in the mid 1970s, and well into the late 1980s, a visitor to Times Square and the streets running east of it to Eighth Avenue, including 42nd—the godforsaken “Deuce’—wasn’t safe at all. The Gray Lady, as The New York Times was nicknamed, must have blushed, when, in the 1950s, grindhouses started mushrooming in the vicinity of the Times Building at 229 West 43rd Street. 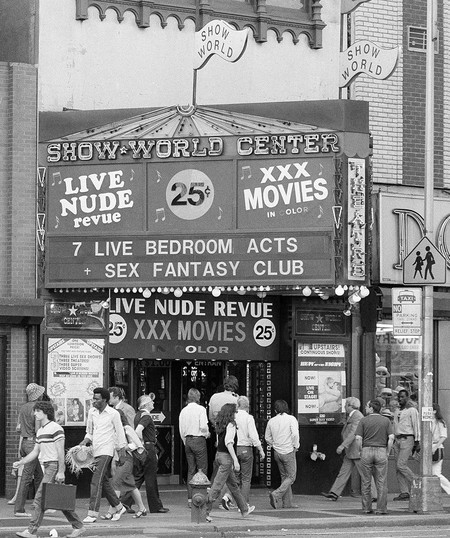 Mandatory Credit: Photo by G. PAUL BURNETT/AP/REX/Shutterstock (6605633a) Graph, People walk past Show World Center on 42nd Street in New York. CBGB, the birthplace of punk rock, is gone. No longer can visitors to Coney Island plunk down a few coins to play the unsettling attraction called "Shoot the Freak." And seedy, edgy, anything-might-happen Times Square? These days, it's all but childproof. Around countless corners, the weird, unexpected, edgy, grimy New York _ the town that so many looked to for so long as a relief from cookie-cutter America _ has evolved into something else entirely: tamed, prepackaged, even predictable Only in New York, NEW YORK, USA 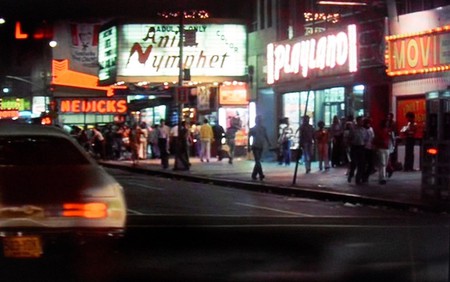 Taxi Driver was written by Paul Schrader, whose self-directed Hardcore (1979) did much the same for L.A. In both cases, the modern Sodom and Gomorrah was conceived by Schrader as a purgatory for a man driven to rescuing a sexually exploited girl. The antecedent was John Ford’s 1956 Western The Searchers.

As the rain-flecked yellow cab driven by Robert De Niro’s damaged Vietnam vet Travis Bickle glides north up Times Square in Taxi Driver—the sequence is phantasmagorical—he narrates in voiceover the thoughts he has been writing in a journal.

Travis’s monologue bespeaks Schrader’s Calvinistic sense of “total depravity”: “All the animals come out at night—whores, skunk pussies, buggers, queens, fairies, dopers, junkies, sick, venal. Someday a real rain will come and wash all this scum off the streets. I go all over. I take people to the Bronx, Brooklyn, I take ’em to Harlem. I don’t care. Don’t make no difference to me.”

As spoken in an undertone by Travis, Schrader’s words sound like a rancid condensation of Bill Landis and Michelle Clifford’s description of the neighborhood’s human traffic in Sleazoid Express: A Mind Twisting Tour Through the Grindhouse Cinema of Times Square (2002): 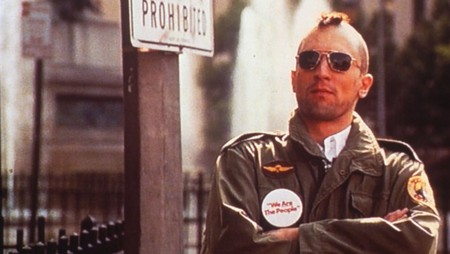 Scorsese gives a visual rejoinder to Travis’s fantasy of rain “washing all this scum off the streets” by showing a fire hydrant spraying water over the streets—a biblical echo of the flood narrative in Genesis.

As Travis’s madness takes hold, he appoints himself judge, jury, and corruption-purger. He executes not only the pimp (Harvey Keitel) who has been running the teenage prostitute Iris (Jodie Foster) but also two of his cronies. 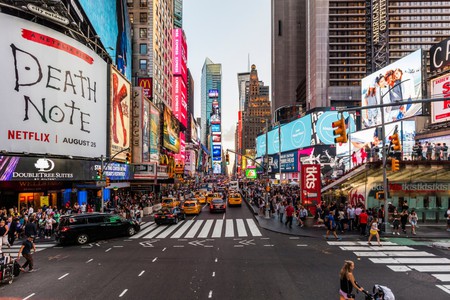 In the end, it wasn’t flood-water—or fire and brimstone, which razed Sodom and Gomorrah, as also recorded in Genesis—that cleaned up Times Square. It was Walt Disney’s reopening of the New Amsterdam Theater at 214 West 42nd Street in 1997, and the subsequent redevelopment of the area as the legitimate (albeit senses-assaulting) entertainment mecca it is today.

One of the ironies of The Deuce series is that it’s almost affectionately nostalgic for the sordid Times Square of the early 1970s—or, at least, for Scorsese’s poetic vision of it.