Awesome NYC Film Locations No. 6: The Queensboro Bridge in 'Manhattan' 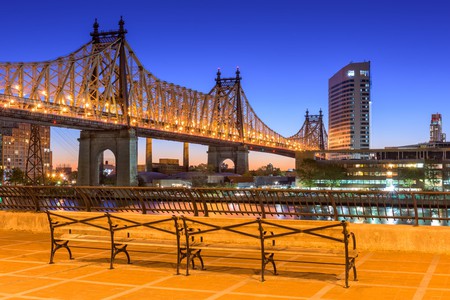 How Woody Allen made movie magic with a beautiful New York City vista and Diane Keaton in 1979.

The most lyrical introduction to New York City in movies is the montage that opens Woody Allen’s Manhattan (1979). Scored to George Gershwin’s “Rhapsody in Blue” and shot in widescreen black and white by Gordon Willis, it piles familiar image on familiar image of the town—Fifth Avenue, Park Avenue, the Guggenheim Museum, the Staten Island Ferry, Washington Square Park, Central Park, and so on. Allen’s comic voiceover narration as would-be novelist Isaac saves the sequence from grandiosity.

” ‘Chapter One. He adored New York City,’ ” Isaac announces. ” ‘He idolized it all out of proportion.’ No, make that: ‘He romanticized it all out of proportion. Now…to him no matter what the season was, this was still a town that existed in black-and-white and pulsated to the great tunes of George Gershwin.’ Ahhh, now let me start this over, ‘Chapter One. He was too romantic about Manhattan as he was about everything else. He thrived on the hustle and bustle of the crowds and the traffic.’ ”

Isaac also thrives on silence and stillness—at least when he is sitting with Mary Wilke (Diane Keaton) on one of the benches in Sutton Place Park at East 58th Street. They have a spectacular view of the Queensboro Bridge, also known as the 59th Street Bridge.

When Isaac first meets the journalist Mary, who is the insecure mistress of his friend Yale (Michael Murphy), he thinks her insufferably pretentious. Chancing on her at a black-tie event, he gets to know and like her better. They get a cab to the Upper East Side and, bantering about their divorces and love lives, stroll toward Mary’s apartment, Willis filming them in a uninterrupted Steadicam shot; Isaac’s gentle insulting of Mary indicates he is attracted to her.

Mary fetches her dachshund and, as Gershwin’s “Someone to Watch Over Me” wells up on the soundtrack, they take it for a walk, stopping at a fast food joint where Mary compliments Isaac on his humor. She suggests they take a late-night walk by the East River. They wind up talking on the bench in Sutton Place until first light, the bridge’s towers and flowing anchor and cantilever arms lending the urban idyll a touch of fairytale romance.

The bench was brought in for the Sutton Place scene, which Allen shot at 5 a.m. The bridge was illuminated by two sets of necklace nights, one of which failed during the shoot, according to Tammy Tour Guide. This meant Willis had to get the shot in one take. He aced it.

The image of Isaac and Mary sitting on the park and looking on the bridge became the most famous in the film—perhaps the most famous in Allen’s oeuvre—and was chosen for the poster. Mary and Isaac say a few words that emphasize Manhattan is Allen’s Valentine to New York City.

Mary: Isn’t it beautiful out?

Isaac: Yeah. It’s really…it’s really so pretty when the light starts to come up.

Isaac: Boy, this is really a great city. I don’t care what anybody…it’s just…it’s really a knockout, you know?

As lovely as the scene is, it harbors a dangerous illusion. When two people, newly acquainted, sit up talking all night, they are often in the throes off falling in love. Isaac and Mary appear to be doing exactly that. Isaac, who is 42, knows he is too old to have a 17-year-old girlfriend in Mariel Hemingway’s Tracy; Mary believes her involvement with Yale, who says he still loves his wife (Anne Byrne), is hopeless.

Mary and Isaac tacitly pursue a romance beneath the bridge—and later at the Planetarium in New York’s Museum of Natural History—but neither is conscious at this point of whom they truly love. Allen’s magical Queensboro Bridge shot is a backdrop to mutual self-deception. 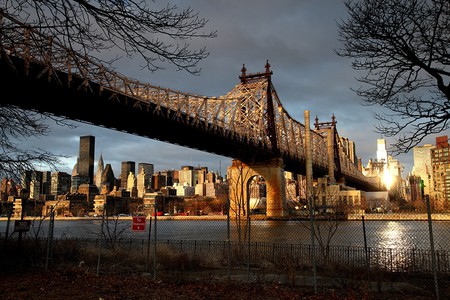 Paul Simon and Art Garfunkel might well have been sitting on a bench in Sutton Place Park when they sang “The 59th Street Song (Feelin’ Groovy).” In F. Scott Fitzgerald’s The Great Gatsby, Nick Carraway observes, “The city seen from the Queensboro Bridge is always the city seen for the first time, in its first wild promise of all the mystery and the beauty in the world.” 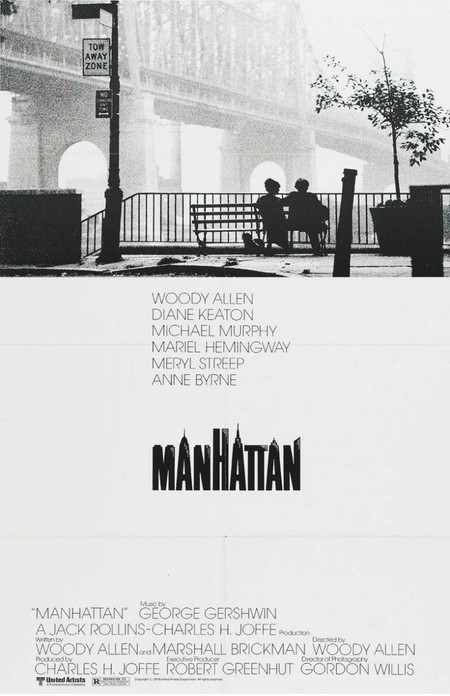 The Queensboro Bridge not only spans the East River, it reaches into the imaginations of filmmakers, singers and songwriters, and novelists. It may not have the foundational aura and industrial heft of the Brooklyn Bridge, but it is a more subtly poetic conduit to romance and the feeling that, as Isaac says, “Boy, this is really a great city.”