At Sans, the Chef Guarantees You’ll Forget About Butter 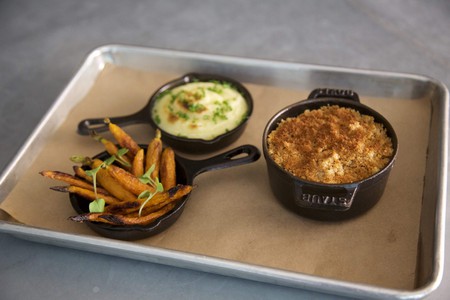 Vegan food gets a new look at Sans, a newly opened restaurant in Brooklyn. Here, chef Champ Jones aims to create dishes highlighting vegetables and grains where diners will happily forget all about butter, if only for one night.

Chef Champ Jones is fired up when it comes to vegan fare.

The plant-forward chef (formerly of Eleven Madison Park and The NoMad) opened Sans, an entirely vegan restaurant, on a bustling corner in the otherwise sleepy Carroll Gardens, Brooklyn. His first solo project serves as an effort to introduce vegans and non-vegans alike to the diversity and multiplicity of the culinary style. For now, the restaurant is only set to be open for a year. 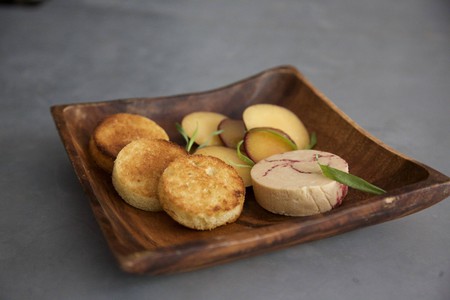 Jones is not a vegan himself, but he’s always been especially curious when it comes to the non-traditional and the esoteric in the culinary world. After all, he initially took an interest in cooking after becoming involved in a friend’s CSA share (a community-supported agriculture program where people are easily connected with produce on a weekly or monthly basis).

“I’ve always been into exploring these fringe things,” Jones says. “I’ve been experimenting with tempeh and tofu and misos at home in my free time. It’s never gone away that I wanted to get deeper into that side of things.”

The menu at Sans offers exclusively vegan dishes, but they’re prepared and presented in an undeniably creative way where diners don’t feel as if they’re pining for milk or meat at the end of the meal. “We make all our flavors really intense so that you feel like you’re not missing out,” Jones promises. 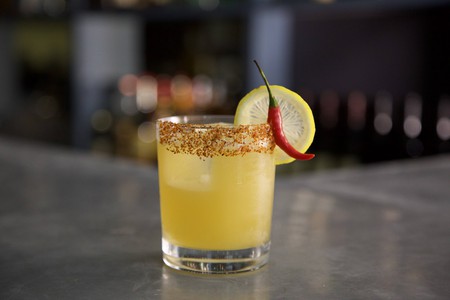 Here, rounds of pickled plums, arranged like shingles, flank a black-plum terrine and hunks of crusty brioche. Thumb-pressed lasagnette circles are swiped with red sauce and a twist on béchamel, offset by piped pools of savory foam. There’s even a cheeky play on the quintessential 1950s meatloaf TV dinner: a mushroom farce, showered with breadcrumbs, is crisped up in the oven, and two mini cast-iron pans brim with whole-roasted carrots and pomme puree, all neatly presented on a silver tray. For the uninitiated, it’s often surprising to conclude these dishes are wholly vegan.

Jones has had a lot of fun playing around with menu items, especially since vegan fare is still in its infancy.

“I really enjoy the creative opportunities,” Jones says of the cooking process. “The creative limitations are really helpful in a sense that you can’t just work with anything and everything. You have to narrow your scope and really try to dig into those ingredients within that restricted set.”

Even though the restaurant is certainly geared toward vegans, Jones remains steadfast that non-vegans will appreciate and enjoy the dining experience at Sans. 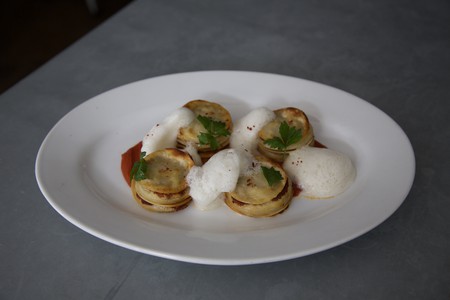 “Some of the best compliments we’ve received from our guests have been that our food is heavy,” he says, laughing. “That really illustrates the fact that generally people see food as unfilling. But it’s our goal to be just that: to be filling, satiating – an unsacrificial dining experience.”

Along with the a la carte menu, Sans also offers a five-course tasting menu for $68, studded with dishes like olive caviar and bread crumb custard. The beverage program, helmed by sommelier Daniel Beedle (previously of The NoMad), centers on diminishing waste by recovering excess ingredients not used in the kitchen and reinvigorating them in cocktails. Drinks might include A Couple Moments (Old Tom gin, muddled sugar snap peas, lemon and hyssop) or One More (pineapple skin rum, peach and mint).

“Vegan food is in its early stage, and that’s part of what is so interesting and exciting,” Jones says. “There are a lot of unknowns. But there’s a lot of opportunity to do new things.”