An Introduction To '90s Boy Bands In 10 Groups 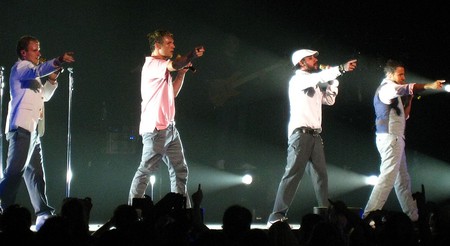 The 1990s was a sublime decade for those interested in having a handsome group of boys to fawn over while, often simultaneously, being serenaded by beautiful harmonies and entertained by synchronized dance moves. Travel back in time with us and relive the nostalgia with these 10 ’90s boy bands that remain in our hearts and our iPods to this day.

Are they ‘original?’ ‘Yeah.’ Are they the ‘only one?’ ‘Yeah.’ Are they ‘sexual?’ ‘Yeah.’ Are they ‘everything you need?’ You bet. Who could we possibly be talking about? The 90s perfection that is the Backstreet Boys, of course. Originally formed in Orlando, Florida, these four handsome men took the world by storm with their energetic songs, kicking things off with their debut single, ‘We’ve Got It Goin’ On’. Their charisma only grew with their series of popular ballads every girl dreamed of being the inspiration for, including ‘Quit Playing Games (with My Heart)’, ‘I Want It That Way’, and ‘Shape of My Heart’. Lucky for us living in a 90s state of mind, the Backstreet Boys regrouped in 2005 after a two-year hiatus, even touring with New Kids on the Block in 2011, making for an explosion of nostalgia. BSB is still making music, which makes us feel ‘larger than life’.

Before he was explaining the mystery behind the brand Chicken of the Sea to then-wife Jessica Simpson, Nick Lachey was making us swoon with his singing abilities in the boy band, 98 Degrees. This group with a pop and R&B sound released their first album in 1997, but it wasn’t until the following year they had their breakthrough moment. Thanks to the magic that is Disney and Stevie Wonder, 98 Degrees rose to fame after their appearance in the classic Mulan with their duet with the piano genius, ‘True to Your Heart’. Following their debut, 98 Degrees broke the hearts of 90s girls all over in the most charming way possible with their popular single, ‘The Hardest Thing’. Although these boys went around telling you they ‘don’t love you,’ despite it being ‘the hardest thing’ they ever had to do, they still managed to win the hearts throughout the late 90s with their harmonies.

Right before the turn of the century, Dream Street entered into our lives and introduced us to the wonder that is Jesse McCartney. Although the boy band did not last long, disbanding three years later in 2002, the talent of these four teenagers were enough to leave a lasting impression on our hearts. Although they were formed in 1999, their debut album was released in 2001, receiving a certified Gold. Their two singles, ‘It Happens Every Time’ and ‘I Say Yeah’ could frequently be heard on Radio Disney. The boys of this pop boy band have now gone their separate ways, including the ‘beautiful soul’ of Jesse McCartney, but they will always be remembered for their humble beginnings.

The exact sounds they are scatting in the chorus my be unclear, but what is clear is the success Hanson gained from their popular single, ‘MMMBop’. Hanson was made up of three brothers that took the 90s by storm when the hit song was released in 1997. Their debut album, Middle of Nowhere, earned three Grammy nominations, further confirming the cultural impact Hanson had on the decade. We ‘hold on to the ones who really care,’ and the Hanson brothers really cared about entertaining us with their melodies and boyish charm.

New Kids on the Block

They may have been new in the 1980s, but by the time the 1990s rolled around, these guys were the coolest kids on the block. This boy band introduced the world to the trendiest dance craze that involves careful rhythm, hopping, and smoothly kicking your legs from side to side with the release of their single, ‘You Got It (The Right Stuff)’ in 1989. In the year 1990, they had become one of the most popular acts in the U.S., releasing their album Step by Step. The first single off the album, ‘Step by Step’, went straight to number one on the Hot 100 Singles Chart, becoming their biggest selling single. And after all these years, New Kids on the Block proved they still ‘got the right stuff.’ ‘First time was a great time,’ of course, and the ‘second time’ they reunited in 2008 after a break, which consisted of the combined NKOTBSB tour in 2010, ‘was a blast,’ but the ‘third time’ in 2013, finally receiving a star on the Hollywood Walk of Fame in 2014, was when we ‘fell in love’ all over again.

The UK has brought us a lot of entertainment over the years, including the English pop boy band, Take That. The band that formed in 1990 introduced us to Robbie Williams, who has launched a successful solo career since leaving the band in 1995. They were sought out with the goal in mind of creating a British singing group modeled after New Kids on the Block. Take That has had 28 Top 40 singles, and 17 Top 5 singles in the UK, 12 of which reached the number one spot. They received critical acclaim in Britain, receiving eight Brit Awards in their career, including victories for Best British Group and Best British Live Act.

Another boy band brought to us from the depths of the UK. BBMak was an English pop trio that sold three million albums and spawned two Top 10 and Top 40 singles worldwide. They introduced themselves in 1999 with their debut single, ‘Back Here’. You may also recognize these Brits from their frequent stunts on Disney programming gems, including a cameo on Even Stevens in 2001 and an appearance of their song, ‘Out of Reach’, in Lizzie McGuire. Their Disney connection does not stop there. They also can be heard in Disney’s Treasure Planet soundtrack and in Disney’s Return to Never Land with their cover of ‘Do You Believe in Magic’. Although the group disbanded in 2003, we’ll always have their rich harmonies to remember them by.

‘Girl I must warn you’ – this next band has one of the catchiest songs around, it will plague your memory. Some might even go so far as to say it’ll ‘poison’ you and remain in your singing veins. The band we’re talking about is none other than Bell Biv DeVoe, the trio that branched off from New Edition. In the wake of the 1990s, the group released their debut album, Poison, later credited as pioneering the ‘new jack swing’ sound that entered the early 1990s. This new sound fused hip-hop, funk, soul, and pop music. BBD received further acclaim for their debut album as it reached number one on Billboard’s R&B/Hip-Hop chart. Take it from any person stuck in the 90s, one listen to this edgy boy band and you’ll never be able to ‘get it outta your head’, eventually ‘driving you out of your mind.’

A cappella never sounded better than coming from the angelic harmonies of Boyz II Men. The quartet, turned trio, dominated the 90s charts with their powerful ballads. Their first release, ‘End of the Road’, stayed at number one on the Billboard Hot 100 for 13 weeks, breaking the record for longevity set by Elvis Presley. They proceeded to break their own record with the release of ‘I’ll Make Love to You’, staying number one for 14 weeks, followed by ‘One Sweet Day’, lasting 16 weeks. Not only were they successful in serenading us, Boyz II Men played an important role in bringing back R&B to mainstream attention in the 1990s, like it once was in 1970s. Luckily, the boy band has not ‘come to the end of the road.’ They’re still an active group, most recently appearing in Fox’s live production of Grease as the teen angels who beautifully convince a hesitant pink lady to drop out of beauty school.

They helped us realize this ‘pop life’ is ‘not a trend’ and that they have the ‘gift of melody,’ reassuring us they’ll ‘bring it to the end’. Of course we’re referring to the 90s boy band staple, *NSYNC. These five dancing guys formed in Orlando, Florida in 1995, first launching overseas in Germany. They soon became an overnight success throughout much of Europe, finally gracing the U.S. with their presence in 1998 with their debut single, ‘I Want You Back’. They followed up with their single release of ‘Tearin’ Up My Heart’, which became a major hit on pop radio and, according to VH1, one of the 100 Greatest Songs of the 90s. *NSYNC’s fame only grew from there, hitting groundbreaking success with their album No Strings Attached in 2000, which held the record for one-week sales in the country for 15 years, only recently being broken by Adele in 2015. Alas, all good things must come to an end. In order for Justin Timberlake to bring ‘sexy back’ as a solo artist, he first had to break from the boy band us 90s fans fell in love with, forcing us to say ‘bye, bye, bye’ to *NSYNC in 2002. At the time, they announced it as a ‘temporary hiatus’, but the group has not made music together since then, turning out to be the most heartbreaking lie in boy band history.