An Audience With Rupert Everett at Oscar Wilde NYC 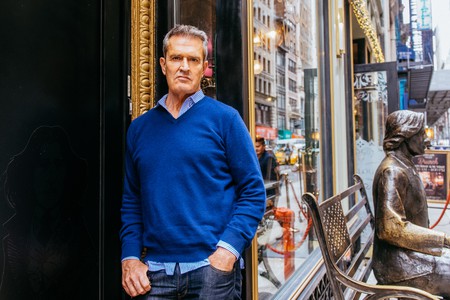 The writer, director and star of The Happy Prince talks about the movie’s depiction of Oscar Wilde’s wanderings following his release from prison in 1897.

Situated on West 27th Street between Broadway and Sixth Avenue in Manhattan, Oscar Wilde NYC is a spectacularly roomy bar-restaurant chock-a-block with gleaming Victoriana and decor that combines elements of the belle époque and the Roaring ’20s. It seemed the obvious place to chat with Everett about his bittersweet Wilde biopic, which focuses on the disgraced poet-playwright’s troubled – but not wholly melancholy – last three and a half years. Framed by the dying Wilde’s redemptive reverie, the movie enfolds memories of his recent past and episodes from his sojourns in Normandy, Naples and Paris. 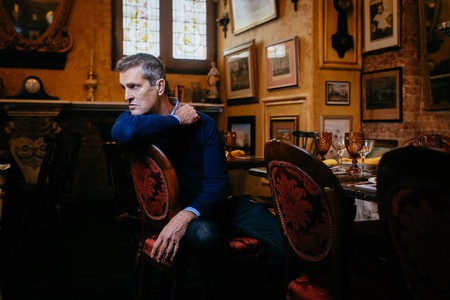 Culture Trip: What was the germ of The Happy Prince?

Rupert Everett: I wasn’t getting very interesting parts, and I felt that to keep going I had to be much more proactive. I thought, “What I’ll do is write a great role for myself.” I felt that Oscar Wilde was a good character, especially since I’d had this angle on him since reading the Richard Ellmann biography. Paris at the end of the 19th century is what I think of as glamour, and it made me want to tell the story. What I find glamorous is what some people just find depressing. The story of Wilde on his deathbed is exciting and world changing for me.

CT: Did you think about the contemporary resonances of him being a persecuted gay man?

RE: Yes. Exactly the same problem persists in the whole world today. On three-quarters of our planet, being gay is still a daily life-and-death challenge. Even in our quarter of the world, there’s still some fine tuning to do. 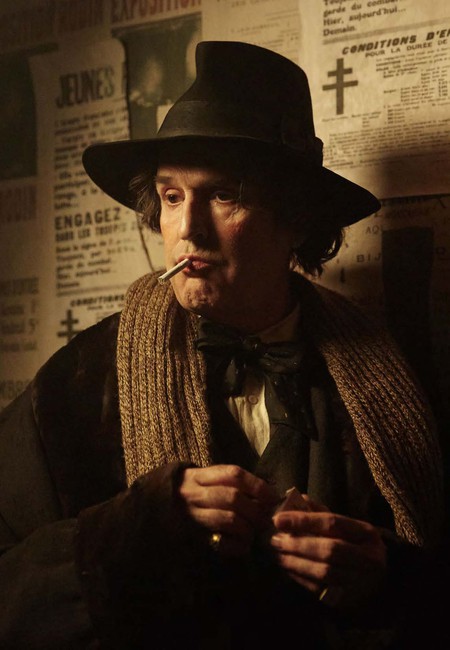 CT: You weave into the film images of Wilde reciting his children’s fable The Happy Prince. Did you see it as a direct allegory of Wilde’s plight – the idea that he was like a beautiful statue or a prince gradually stripped of his jewels and gold leaf?

RE: Partly, but I also liked the irony that when Wilde walked along the boulevards in Paris he was greeted by street urchins and petty criminals as a friend. It was quite an achievement that he received affection from both the top and bottom of society. I think he found some kind of happiness and equality [among lower-class people], despite the fact that he was an enormous snob. He had very direct relationships with the new constitution he had set up for himself, where he replaced princes and stage stars with rent boys and criminals. It’s very clear they loved him. And I think he was still great fun to be with, even in the gutter. 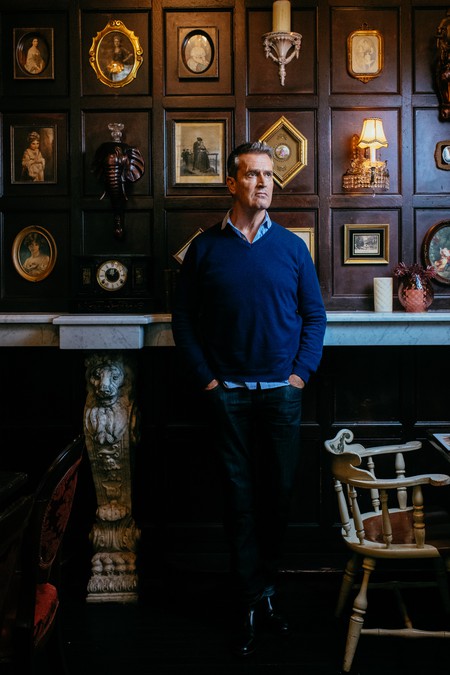 CT: It’s often forgotten that he came out of prison with high hopes for resuscitating his career and was still a very ambitious individual. Sadly, that curdled.

RE: Almost straight away. On the first day after he was released [in May 1897], he wrote to the Jesuit priests in Farm Street, London, and asked if he could be taken on a retreat. They wrote back saying, “No way.” He burst into tears, apparently, when he got that letter. Then he went to Dieppe and the world started bashing him. These French poets came to welcome him into exile, but the restaurant where it happened was scandalized by their high spirits. The chief of police said if he didn’t amend his behavior, he’d have to leave town. At the same time, the English were very present in Dieppe and he was recognized nonstop.

CT: You have a scene in which a group of spiteful young Englishmen pursue Wilde and his friends Robbie Ross [played by Edwin Thomas] and Reggie Turner [Colin Firth] through the streets of Dieppe. Was that kind of harassment typical?

RE: It happened all the time. He was asked to leave restaurants and hotels. People spat on him in public. Once he discovered that that was going to happen, he realized that his exile was not going to be a rehabilitation. The scandal was going to follow him around wherever he went. 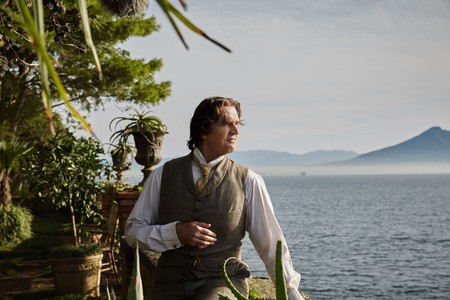 So he left Dieppe and went to the village Berneval. I went there myself. It’s funny; when you become a sleuth of a character like this, there are so many places to go, and some of them are very affecting, and some have no message at all. I found that I got no message from L’Hotel [in Paris’s Saint-Germain-des-Prés], where you can stay in the room where Wilde died, but Berneval was very moving because it was so secluded and isolated.

One could imagine the loneliness of this man who had thrived on company and witty conversation living in a country B&B. You could feel how the depression must have landed on him like a thick fog. That, of course, is where he made the last of his fatal mistakes, which was going back to Lord Alfred [‘Bosie’] Douglas.

CT: Your film doesn’t alter the general perception that Bosie [played by Colin Morgan] was selfish and narcissistic.

RE: Bosie was just a kid and you can’t overanalyze him. He was young, quite good looking, and aristocratic. Great fun, but very highly strung. He had mood swings of the first order. But he and Wilde got on very well in some ways. What I hoped to show in the scene when they are reunited at Rouen station is that there was great affection between them – they’re immediately laughing and crying.

I don’t think Bosie is the Antichrist in the story. I think that everything that happens to Wilde is his own fault. That’s what’s so touching about him as a character, because everything that happens to all of us is our own fault. That’s why Wilde is Everyman, in a way, because he’s so human. Later, Bosie did become a real monster, but it wasn’t Bosie’s fault that Wilde put everything into the hands of this boy who’s a kind of delinquent. 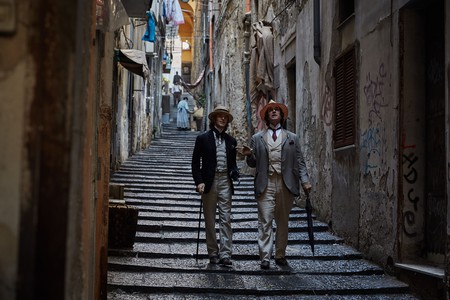 CT: Do you think Wilde’s defiant pursuit of pleasure was his downfall?

RE: I think what brought him down was his blindness. At a certain point, he started to believe what celebrities often believe, which is that the whole world turns around them. Wilde had arrived at the zenith of being the most famous man in London, with three consecutive hit plays in the West End and an aristocratic boyfriend on his arm. Suddenly he’s right at the top of the tree, and I think this went to his head. When the Marquess of Queensberry, the father of Lord Alfred Douglas, addressed the card “To Oscar Wilde posing as a so[m]domite” – that’s when Wilde began to make a series of completely bad choices. His snobbery and vanity – that he somehow thought he was above the upper echelons of society – destroyed him.

CT: Robbie Ross’s loyalty to Wilde comes across very movingly in the film.

RE: Robbie had an affair with Wilde, which, according to both of them, introduced Wilde to homosexuality. It was Robbie who opened Wilde’s eyes to who he was, and Robbie loved him. I think Wilde realized too late that all this love that he’d been writing and talking about was sitting there in front of him, in Robbie. He hadn’t quite noticed it because it wasn’t wrapped up in the correct kind of gilded bows. After Wilde died, [Robbie] spent the rest of his life resuscitating Oscar and being bullied by Bosie. The feud between them never ended. 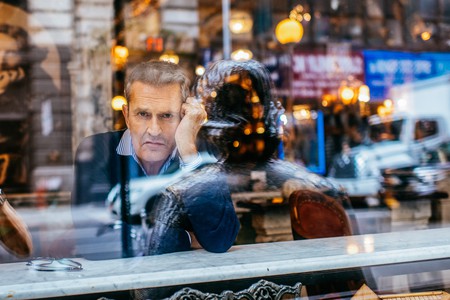 CT: What do you think would have happened if Wide’s wife, Constance, and Bosie’s mother hadn’t threatened to cut them off financially and had let them live together in Naples?

RE: I suppose if they’d had money they might have made a go of it. But I think that when they got together again, neither of them was actually very enthusiastic about it; it was doomed from the start. They were trying to re-find something that had so utterly changed and been so scarred by what had happened to Oscar in prison. I think it would have been better for them never to have met again, but to have held the past in their heads without trying to recreate it. Bosie had been untouched by the scandal, and I think he realized straight away that he couldn’t deal with the strictures of living in Naples. Wilde said that he decided against committing suicide in Naples because it would have meant an eternity of bad food [laughs].

CT: Do you think of Wilde as a martyr?

RE: I think of him as a martyr, as a patron saint, as a Christ figure even. He was instrumental in bringing about change concerning homosexual rights, starting the road to liberation at the beginning of the 20th century. He started a debate that the whole world joined. Homosexuality was something that simply nobody talked about before, and so it got a profile and a name. Wilde was pivotal, and I believe he realized it himself. 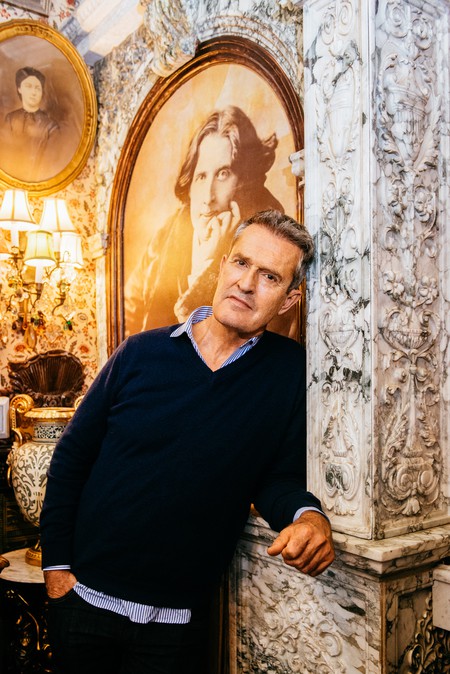 CT: He carried over into his life his belief in art for art’s sake – the idea that love and beauty were inviolate and had to be pursued at all costs.

RE: I think he had an idea that going into poverty was going to immortalize him and that his life was going to be an artistic and political expression – that he was an artwork, in a way. I also think he saw himself as a Christ figure. He said that the road to liberation would be long and smeared with the blood of martyrs, and he knew he was on that road. It probably didn’t feel like that in long cold winter days in a cheap hotel room with no heat, but he must have known that homosexuality wasn’t a sin and that, at some point, things would change.