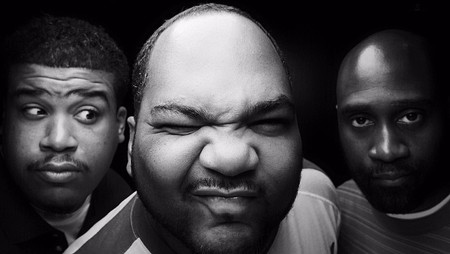 On Aug. 26, De La Soul released their new album and the Anonymous Nobody… Their first studio LP in 12 years, and ninth full-length in total, Posdnous, Maseo, and Dave are continuing their sampling legacy, but with an unheard of twist that will ensure no million-plus lawsuits follow its release: sampling themselves.

Over the course of three years, De La Soul recorded somewhere between 200 and 300 hours of original material by the Rhythm Roots Allstars, their touring 10-piece funk and soul band. From that material, the trio chopped, pasted, and looped together the foundation of their 17-track album. De La Soul then employed another 25 musicians to play on the album, and queued up a mixed bag of A-listers for features that includes, among others, Snoop Dogg, Jill Scott, Damon Albarn, Little Dragon, 2 Chainz, Usher, and David Byrne.

Unlike any other album in their catalogue, and the Anonymous Nobody… could represent a new era for sampling, much like De La Soul’s 1989 debut album, 3 Feet High and Rising, revolutionized sampling in hip hop. Instead of hinging on James Brown loops and breakbeats, De La Soul and producer Prince Paul dipped their hands into crates sooty and neglected, pairing artists like Jefferson Starship and Vaughan Mason & Crew on the same track.

While De La Soul pulled from a variety of popular artists — Tom Waits, Bob Marley & The Wailers, Lenny Kravitz, Johnny Cash — and songs that just about anyone would recognize today — I Can’t Go for That (No Can Do)” by Hall & Oates, “(Sittin’ On) the Dock of the Bay” by Otis Redding, “Best of My Love” by The Emotions — their first three albums (De La Soul Is Dead and Buhloone Mindstate being the second and third, respectively) are filled with gems out of left field. Here are 20 of our favorite more obscure tracks sampled.

“Written on the Wall” – The Invitations [“Plug Tunin’”]

A quick Google search on The Invitations will reveal almost no information on the group. Dig a little deeper and you will see that the ensemble was originally comprised of Roy Jolly, Gary Grant, Bill Morris, and Bobby Rivers, and that “Written on the Wall” was released in 1965. Not every artist gets the attention they deserve during their time in action, and while it is unlikely that we will know much more about The Invitations moving forward, at least De La Soul and Prince Paul brought attention to this record.

This record is exactly the kind of tune you would expect to hear at a roller disco. “Bounce, Rock, Skate, Roll” reached the fifth spot on the US Billboard Hot Soul Singles chart in 1980 and was also sampled by Daft Punk on the tracks “Da Funk” and “Daftendirekt” from the duo’s album Homework.

Written and produced by James Brown, “Think (About It)” is one of the most classic funk records. The song has been sampled over 1,500 times since its creation in 1972, making it the third most sampled track ever and Collins the fifth most sampled artist. This track is responsible for the “Woo! Yeah!” break and the vocal line “It takes two to make a thing go right / It takes two to make it outta sight,” both most recognizable on MC Rob Base & DJ E-Z Rock’s “It Takes Two.”

“Dreaming About You” – The Blackbyrds [“Ghetto Thang”]

The Blackbyrds were formed in Washington D.C. in 1973 by renowned jazz trumpeter Donald Byrd. “Ghetto Thang” also samples the band’s song “Rock Creek Park,” which has been sampled numerous times by hip hop artists — Nas, MF DOOM, Eric B. & Rakim, N.W.A., Ice Cube, etc. — and provided the fabulous line, “Doing it in the park / Doing it after dark, oh, yeah.” “Dreaming About You,” while less popular, is easily one of the smoothest tracks on this list.

Since their formation in 1969, War’s roster has constantly changed. In the beginning, the band was known as Eric Burdon and War. Burdon, former lead vocalist of The Animals and one of Rolling Stone’s 100 Greatest Singers of All Time, only released two records with War in 1970 before splitting with the band after he collapsed on stage during a performance due to an asthma attack. While “Magic Mountain” wasn’t featured on either album, it did appear as a b-side to the single “Spill the Wine,” as well as on 1976’s Love Is All Around, which featured a number of other leftover tracks from their brief time together.

Barry White is best known for tracks like “Can’t Get Enough of Your Love, Babe,” but his debut album concludes with “I’m Gonna Love You Just A Little Bit More,” one of his sexiest records ever crafted. Funnily, this track is the other song sampled on Daft Punk’s “Da Funk” along with “Bounce, Rock, Skate, Roll.”

Taken from Stone’s 1975 album “High On You,” his first separate from Sly & the Family Stone. Several years prior to the album’s release, Stone and his bandmates started heavily using drugs like cocaine and PCP — Stone carried a violin case full of drugs with him at all times — leading to their ultimate dissolution. Stone’s popularity significantly decreased during this time, and so great funk hits like “Crossword Puzzle” passed by without much attention, failing to even chart within the R&B Top 40.

We all know DJ Jazzy Jeff, but what about MC Jazzy Jeff? One of the five members of the Funky 4+1, the Bronx collective was the first hip-hop group to receive a record deal, perform live on national TV, and to feature a female MC, Sha Rock. In 2008, VH1 selected “That’s the Joint” for the 41st spot on its list of 100 Greatest Hip-Hop Songs. Interestingly enough, MC Jazzy Jeff and DJ Jazzy Jeff, along with Will Smith aka the Fresh Prince, were both signed to Jive Records at the same time, leading to a lawsuit over the rights of the name.

Bob James is considered one of the leaders of smooth jazz. While he may not seem like the most likely candidate for one of hip hop’s most sampled artists, his music is scattered across the genre, and he even received a shoutout from Andre 3000 in Goodie Mob’s “Black Ice.” “Take Me to the Mardi Gras” has been sampled in 370 songs itself, most notably in Run-DMC’s “Peter Piper.”

“Scottish funk and R&B outfit” isn’t a common phrase, but it’s true for the amazingly named Average White Band. While the recording of their third album, Cut The Cake, was shadowed by the heroin overdose and death of their original drummer, Robbie McIntosh, and creative differences among the band’s members, it still performed well. Forty years after their formation, the blue-eyed soulists continue to prove their groove, and “School Boy Crush” is a perfect example.

While “Good Times” is one of the more well-known songs sampled on De La Soul’s first three albums, the Nile Rodgers and co. cut is one of the greatest disco songs ever written — the 229th greatest song of all time, according to Rolling Stone — and therefore could not be excluded from this list.

When a song’s opening words are: “In the beginning was the beat, and the beat was strong,” you know you are in for a treat. For whatever reason, Johnson has only been sampled twice, making it one of the sweeter treats of De La Soul’s catalogue. Also, Naked Eyes’ “Always Something There to Remind Me” is really just a cover of a Lou Johnson original.

This Baltimore soul trio was composed of Billy Herndon, Garrett Jones, and Gerard ‘Chunky’ Pickney. One of the groups more sampled tracks, “Help Is on the Way” demonstrates the Whatnauts’ uplifting spirit. Whether life has been down on you lately or you’re just feeling the daily stress of living in the 21st century, this song is guaranteed to provide at least seven minutes of relief.

The undeniable party starter of this list, this track has been sampled around 120 times. While “En Focus” is a solid cut, the most important sample goes to T La Rock and Jazzy Jay’s “It’s Yours,” the very first release from Def Jam and the first time the term “boom bap” was used.

Performing under a number of different names, the first being Kleeer, and even switching from disco to hard rock for a short period of time, they reformed as Kleeer in 1978, producing seven albums of electronic-driven funk. This song is your new anthem for whenever you link up to a new WiFi.

This Chicago quintet was composed of five of Betty and Clarence Burke Sr.’s six children and was known as the “First Family of Soul” before that title was transferred to the Jackson 5. While “Don’t Change Your Love” isn’t the hit that is “O-o-h Child,” it’s a strong reminder of what made the Five Stairsteps so great.

The debate surrounding Yardbirds’ guitarists Jeff Beck, Jimmy Page, and Eric Clapton is simply unsolvable. While Beck didn’t achieve the same commercial success as the other two, his discography cannot be denied. You won’t find much more righteous guitar like that on his solo track “Come Dancing.”

“Yes We Can Can” – The Pointer Sisters [“Breakadawn”]

Written by the late great Allen Toussaint, “Yes We Can Can” delivers six minutes of powerful harmonies led by Anita Pointer and a message that resonates just as loudly today as it did in 1973.

Starting off as a studio session band, the Memphis collective was even selected by Otis Redding to perform as his backing band. However, the Bar-Keys eventually pushed out their own records, and without songs like “Sang and Dance” we wouldn’t have bangers like Big Willie’s “Gettin’ Jiggy Wit It.”