The Best Hotels to Book Near Newark Penn Station 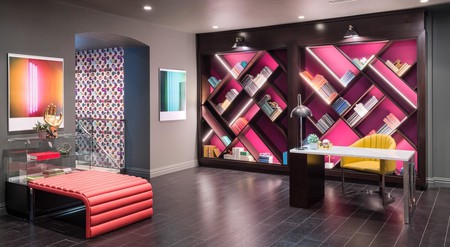 Staying in Newark can be more affordable than staying in New York City – but a fast train from Newark Penn Station gets you into the center of Manhattan within 20 minutes. Here are some of the savviest places to stay for an affordable break, bookable with Culture Trip.

There’s more to New Jersey than its infamous shore. The Garden State has countless restaurants, art galleries and festivals waiting to be discovered. But if great music, food and beaches still aren’t enough for you, New York City is just around the corner – past the airport and over the Hudson River. There are plenty of great hotels near Newark Penn Station, which is just a 20-minute train ride from the Big Apple. 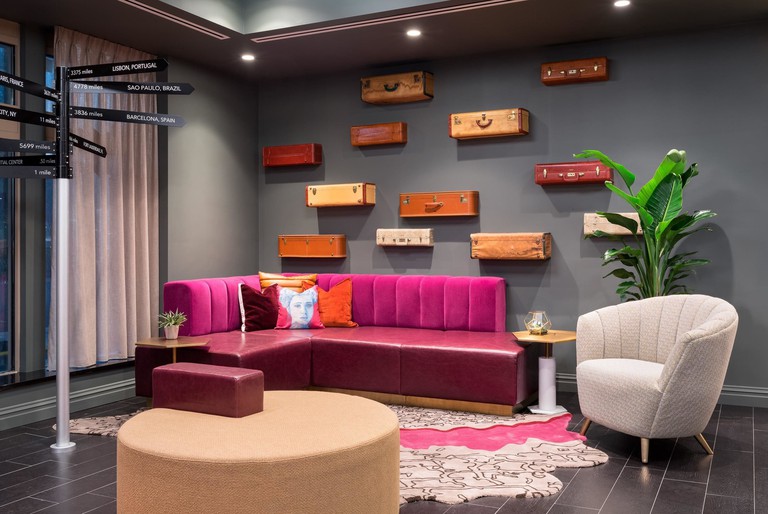 Trick your friends into believing you’re a person of culture by taking a selfie in TRYP’s lobby. This hotel looks like it stepped right out of an art gallery, though thankfully its rooms are as comfy as they are stylish. Of course, if you actually want to take in some culture, you’re in luck – the Prudential Center and New Jersey Performing Arts Center are within walking distance. And if you have to catch up on some work, each guest room has a desk, ergonomic chair and free wifi – along with a flatscreen HDTV. 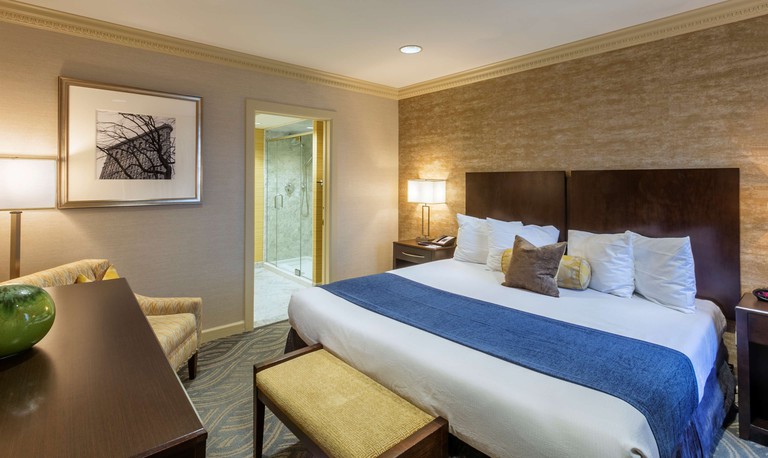 Live like a US President at the Robert Treat Hotel. This historic building has hosted five of America’s leaders, and if it’s good enough for JFK, you know it’s doing something right. Perhaps Jimmy Carter and the lads were drawn to the hotel’s great location – a short walk from the Newark Museum – or its excellent transport links to New York City. It also features a modern gym, huge beds and velveteen furnishings fit for a POTUS. 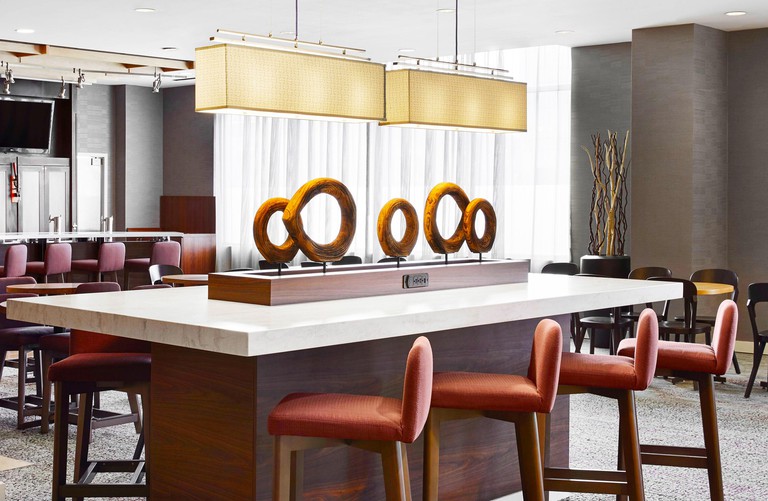 If you can’t be bothered with organizing things, the Marriott’s Courtyard has you covered. The hotel arranges a free shuttle service to and from Newark Liberty International Airport, so that’s one less thing on your mind. It also features a limousine service – so you can hire one, cruise down to NYC, and recreate iconic scenes from Home Alone 2: Lost In New York. And if you need a convenient coffee in the morning, the hotel also features its own on-site Starbucks. 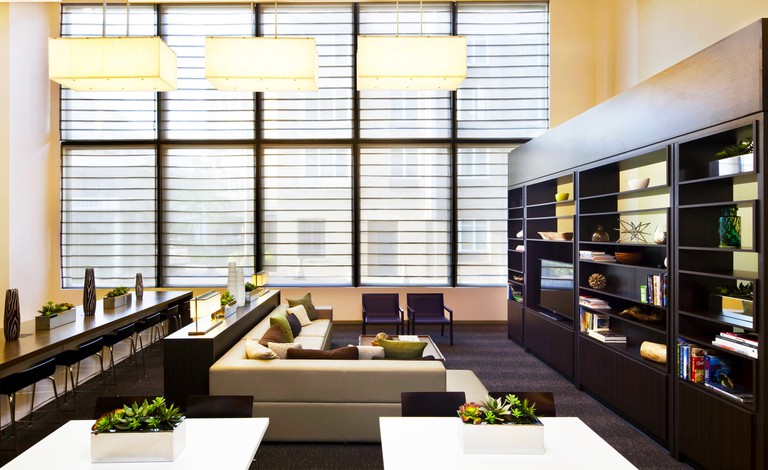 This laid-back hotel is perfect if you just want to chill out. There’s a picnic area if you want to grab some snacks and kick back with a book, and there’s also the Station Bar and Bites – which serves pub-style burgers and fries. The bar also serves a range of craft beers and cocktails, making it a great place for pre-drinks if you’re hitting the town – the Red Bull Arena is just short walk away. 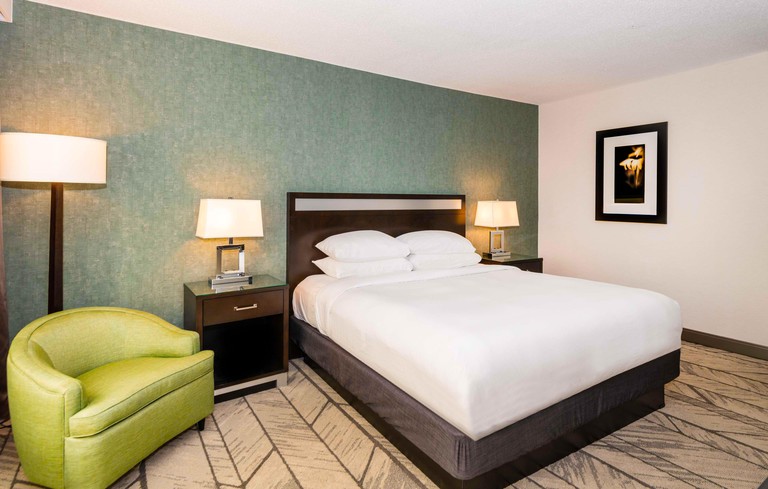 You’ll never miss a train when staying at DoubleTree by Hilton, which is actually connected to Newark Penn Station by an indoor walkway. This means you can jump out of bed and be in Manhattan in around 20 minutes – but there’s more to DoubleTree than just transport links. Guests can enjoy an on-site fitness center, executive lounge and, most importantly, a free chocolate chip cookie every morning. 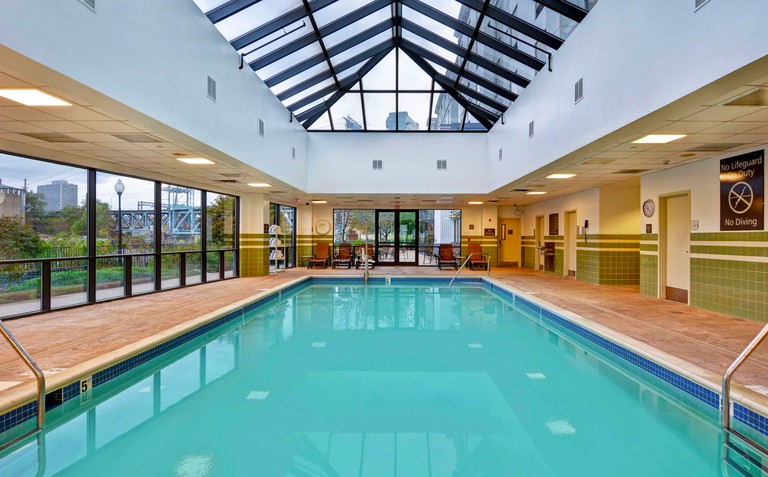 The sleek, comfortable rooms of the Hampton Inn have all the amenities you’d want, plus an indoor pool, snack bar and gym – as well as excellent views of the Jersey skyline. If you’re traveling into New York, you can grab a free shuttle to Newark Penn Station, or you can head to the MetLife Stadium – the New York Giants’ home ground is just a 15-minute drive from the hotel. While you’re there, pick up a giant foam finger and use it to point to your favorite NY landmarks. 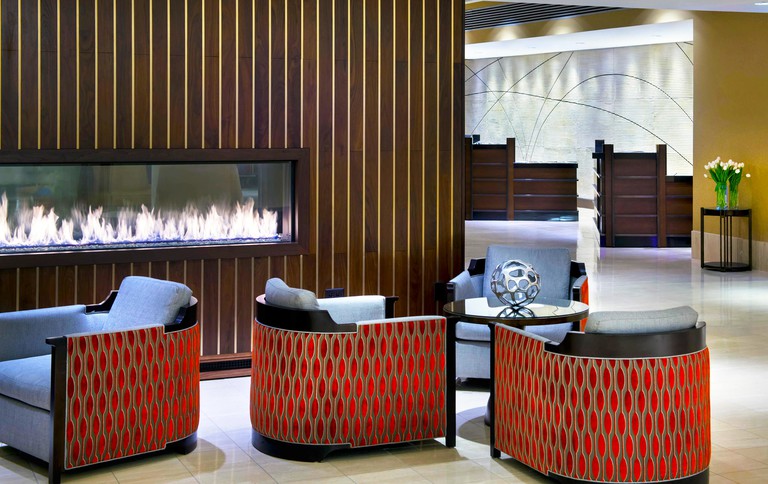 Traveling can be stressful. Sometimes all you want to do when you get off the plane is jump into bed and get in a quick power nap. Fortunately, this hotel is actually located at the Newark Liberty Airport, so you won’t have far to go. And don’t worry about noise waking you up either – all of the hotel’s rooms are soundproof. After you’ve shaken off your jet lag, just jump on a train to Newark Penn Station – you’ll be there in 10 minutes – and head into NYC. 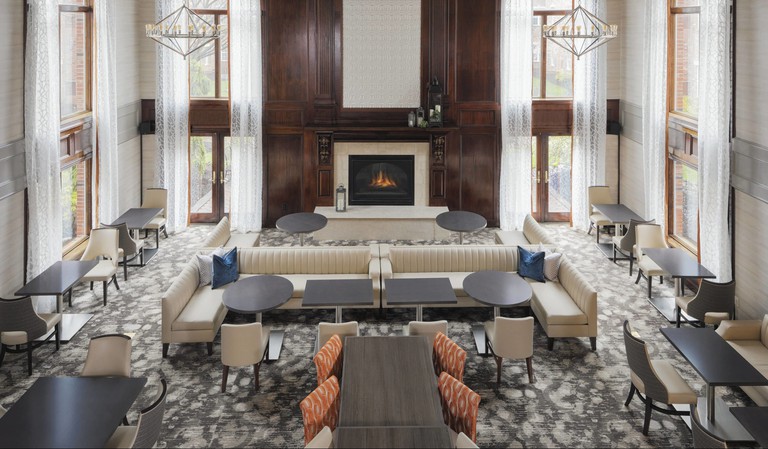 New York is pretty hectic – it’s not called “the City that Never Sleeps” for nothing. However, the Residence Inn offers a bit of tranquility away from the hustle and bustle of the city. Tucked away in Eagle Rock Reservation, the hotel is close to the Thomas Edison National Historical Park, as well as the Pleasantdale Chateau. After a day in the city you can relax by taking a dip in the pool, or getting in a round of billiards in Harry’s, the hotel’s bar.

If you’re looking for somewhere to stay straight off your flight, there are a number of hotels near Newark Liberty International Airport. Or, for those wanting to go direct to the action, see the best hotels near the Statue of Liberty – sat in between New Jersey and New York City – now bookable via Culture Trip. You’ll never run out of things to do, from creative hubs that follow in the footsteps of the most revered artists, to green spaces and restaurants – you’ll feel like a true New Yorker in no time.