Why There’s an 80-Foot-Tall Tire in Michigan

West of Detroit, on the side of the I-94, stands the world’s largest tire. It’s 80 feet (24 meters) tall, weighs 12 tons and can withstand hurricane-force winds. And though it may not be as American as the world’s largest cherry pie, which also happens to be in Michigan, it turns out the mixture of pride, absurdity and tongue-in-cheek humor captured in the giant tire sculpture is a pretty good symbol for Detroit, and it has rightly become a Michigan landmark.

The Uniroyal Tire Company created the tire as a Ferris wheel for the 1964 New York World’s Fair. With 24 gondolas capable of carrying up to 96 passengers in total, famous riders at the fair included Jackie Kennedy and the Shah of Iran. 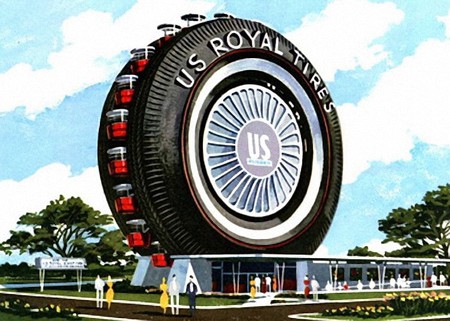 The ferris wheel as it appeared at the New York World's Fair | © U.S. Rubber Company/WikiCommons

After serving over two million riders, when the fair ended there was only one place in the U.S. for a giant tire, and that was, of course, the Motor City. So, Uniroyal reassembled it as a static sculpture outside one of their locations in Allen in Metro Detroit in 1966.

Though the office it once stood by moved long ago, the beloved tire remained, and when Michelin acquired Uniroyal in 1990, the first of several renovations took place, with the tire being modernized with a new hubcap and neon lights in the process. 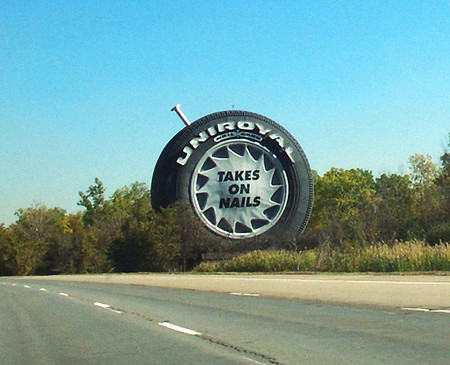 In 1998, to promote a new puncture-resistant product, Uniroyal stuck an 11-foot (3.3-meter) nail weighing 250 pounds in the tire. When it was removed in 2003, the company gifted it to the town of Allen, who auctioned it on eBay to raise funds for a local historical society. It was renovated again that year; along with structural repairs, the lights were also removed.

Over 50 years after moving to its current home, the tire continues to amuse and bemuse unsuspecting drivers every day, so be sure to take the I-94 on your next visit to Detroit.