There’s a Debate Over Who Invented This Classic Detroit Cocktail 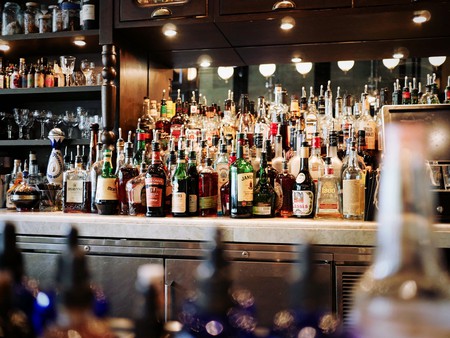 Detroit is home to the Hummer cocktail | © Eaters Collective / Unsplash

Now served in bars across the world, the beloved Hummer cocktail originated in Detroit. The famous mix of rum, Kahlua, and vanilla ice cream, blended to make a deliciously smooth adult milkshake, was created in Motor City some 50 years ago, though there remains a debate about who concocted it first.

Ever since the drink spread around the city and farther in the 1970s, there have been conflicting stories about which of two legendary bartenders actually invented the cocktail, with each claiming that they are responsible for the definitive Hummer recipe.

Only a few days away from one of the grandest events in Bayview's History! Jerome Adams​ is looking forward to seeing you Friday at the Jerome Adams 50th Anniversary Party ⭐️

The name most commonly associated with the Hummer is Jerome Adams, who started tending bar at the Bayview Yacht Club in 1967. He claims to have created it the following year in an effort to fill the shoes of his predecessor. Legend has it that while he was experimenting with alcohol, ice cream, and a blender, a group of customers, including a prominent Detroit restaurant owner, asked to try what he was making and commented that the delicious drink “kinda makes you wanna hum,” which gave the drink its name.

With the Hummer established on the Bayview menu, its members are thought to be partly responsible for it spreading by asking for it in bars across the city, country and beyond.

Back in 2013 Hour Detroit Magazine shared an article with the world about a legendary bartender in Detroit named Farouk. He was a part of The Rattlesnake's history since we opened 30 years ago. Sadly, we must share his part of the history has come to an end, passing on Friday March 2, 2018. He made cocktails a craft in Detroit and dedicated his life to The Rattlesnake Bar. There are not enough words in the world to tell you how many loved, adored and cherished him. Although he may not stand behind the bar, his presence will always be felt and embraced at The Rattlesnake. When details of a memorial become available they will be shared. Until then, please keep his family and The Rattlesnake Team in your thoughts and prayers. @hourdetroitmagazine

However, the earliest documented story about the drink, published in the Detroit Free Press in 1982, claimed it had in fact been created by London Chop House bartender Farouk Elhaje around 1970, though there is no fleshed out origin story like Adams’ associated with Elhaje.

Adams explanation for the conflict is that he had to change his recipe when it became cheaper to make the drink with cream rather than ice cream. Elhaje subsequently claimed to be the inventor of the definitive Hummer because he was the first to make it with ice cream, though Adams maintains he used ice cream first.

Being a company based in Detroit, its only fitting that we pay homage to Jerome Adams, the creator of the original Hummer. This adult milkshake made with Rum, Ice, Kahlua, and Ice Cream was originated 50 years ago at the Bayview Yacht Club on the Detroit River. Thank you for your contribution. . . . #Perfect10Mixology #RIP #JeromeAdams #DetroitLegend #HummerCocktail #313 #DetroitSmallBusiness

The debate has been stirred by the passing of both Adams and Elhaje less than a month apart in early 2018. Adams had celebrated his 50th anniversary working at the Bayview in 2017, while Elhaje had finished his illustrious career by spending more than 25 years at the Rattlesnake Club. Whichever of these Detroit bartending legends invented the drink, we can all agree that we owe them one and will raise our next Hummer in their memory.