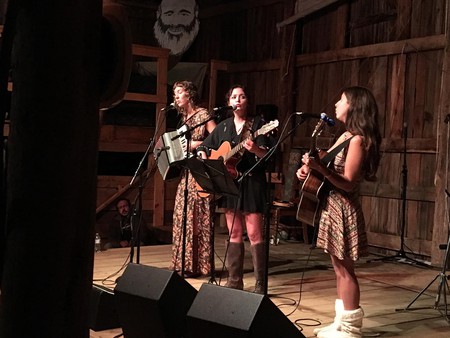 Detroit is undoubtedly among the world’s greatest music cities. Over the past 60 years, it has consistently made an impact in the music world, from Motown and Eminem to Iggy Pop and Jack White, and has too many great venues to list. There’s no sign that the Detroit scene is slowing down, so here are some of the best bands to watch out for at the moment.

As the success of Sweden’s First Aid Kit and Britain’s The Staves demonstrates, people will never grow tired of beautiful sisterly harmonies. Detroit’s answer is Caitlin and Bonnie Drinkard, a.k.a. The Drinkard Sisters. They have been gigging for a number of years but released their first collection of songs in early 2017, and their perfectly uplifting vocals complement their sweet Americana sound.

Sticking with beautiful harmonies, Kubat, Finlay, & Rose are a trio of Detroit-based songwriters who have come together to create rich and moving folk music. Featuring Tamara Finlay, Emily Rose, and Audra Kubat, who have all had success under their own names, the collective combines their delicate acoustic guitars, powerful voices and compelling lyrical prowess with arresting results.

The often sparse, instrumental electronic music made by young Detroit producer Julian Kendall speaks volumes without any vocals being necessary. As fitting when played on headphones on a quiet walk through the city as it is in a crowded club, he carefully balances beats and sounds to make music that can move you in more ways than one. He released his three-track debut EP in 2016.

A young three-piece band making high-octane garage rock, The Idiot Kids have been together since 2011 and have been making a name for themselves playing shows around the city, including at the UFO Factory, PJ’s Lager House, and The Majestic. Chaotic and theatrical on stage, they’re signed to Detroit label Jett Plastic Recordings and released their debut 7-inch “Skeleton Boy” earlier in 2017.

Primarily known for having several stints as a member of Frontier Ruckus and as a member of Failed Flowers, as a solo artist, Anna Burch is still a relative newcomer. Inspired by the success of indie folk stars Angel Olsen and Cate Le Bon, her material is lo-fi. Keep an eye out for her debut album this year, and follow her on Twitter for a taste of her acerbic wit.

Detroit duo Valley Hush is singer-percussionist Lianna Vanicelli and producer and multi-instrumentalist Alex Kaye, and together, they make genre-defying pop music featuring bluesy rhythms, complex layers of sound, and Vanicelli’s delicate vocals—think Purity Ring and Sleigh Bells for a comparison. They regularly play shows around the city and released their debut album in late 2016, which you can listen to on Spotify.

Born and raised in Motor City, singer, songwriter, producer and guitarist Britney Stoney first developed her neo-soul sound at open mic nights across the city. She was named a 2014 Kresge Foundation Artist Fellow and used the grant money to buy the necessary equipment to develop her sound and put out her own music. She has released two EPs to date and opened for artists such as Ziggy Marley.

It’s never too late to form an up-and-coming band, as The Britemores prove. Four longstanding members of the Detroit music scene, Johnny Chan, Jeff Meier, Jerry Barterian and Will Lorenz, each of multiple others bands, have come together to make guitar-driven punk-rock that nods to many Detroit staples. Their debut album was released last year on Jett Plastic Recordings. As they say, it’s a band 30 years in the making.

The opening words of ‘Distortion’, the opening song on Paint Thinner’s demo cassette are “dark and stormy,” which kind of sums up their sound perfectly. Rather like Detroit’s Protomartyr (who Paint Thinner have supported), they make fuzzy and brooding rock that flits between punk and noise, changing pace almost at will. Listening to them is an intense and bruising experience, so just imagine what their shows are like.

Once a Detroit punk in the hardcore band GCMS, Scott Fab has recently returned to music after a long absence, starting all over as a singer-songwriter. Leave My Friends, his comeback album released earlier this year, is full of beautiful acoustics and poignant lyrics. A year in the making, every note and word feel considered, and the effect is a flowing, cohesive set of powerful songs.