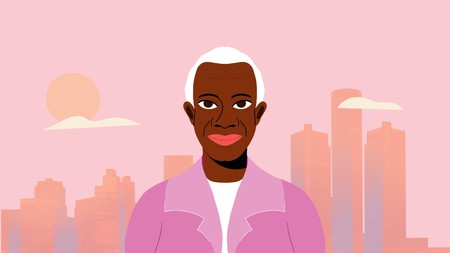 Mother Ruth Charlotte Ellis is a legendary figure among Detroit’s black LGBTQ community. Her life and legacy, which reached LGBTQ community members and allies of all ethnicities and backgrounds, is still widely celebrated today, both in Detroit, her home city of many years, and around the world.

Known as ‘Mother’ thanks to her role as a matriarchal figure in the LGBTQ community, Mother Ruth Charlotte Ellis was thought to have been the oldest living out lesbian by many LGBTQ community members and allies when she died at 101 in 2000. Born in Springfield, Illinois, in 1899, Ellis had a love for creating sustainable community and supporting queer youth.

The impact of Ellis’ life and legacy has been celebrated in big ways by her city and community, both during her life and after her death. Ellis’ 100th birthday celebration was held on the campus of Detroit’s Wayne State University with the guest of honor in attendance and dressed to the nines. Ellis’ life was also celebrated by Chicago film director Yvonne Welbon in her documentary Living with Pride: Ruth Ellis @ 100 (1999). In 2009, Ellis was inducted into the Michigan Hall of Fame and she was added to Chicago’s Legacy Walk – an outdoor art installation honoring people in LGBTQ history – in 2013. Each year, Detroit’s black Pride celebration (the second oldest in the country) kicks off with a parade in Ellis’ name to begin the week-long Hotter Than July events.

Ellis was an LGBTQ icon who lived her life outside of the closet and helped other women feel comfortable with themselves. As a storyteller and gatekeeper of black lesbian history and knowledge, the centenarian painted stories of lesbians for lesbians, shared from personal memories. Ellis spent time with and emotionally nurtured younger lesbians, helping them to understand the importance of education and advising them to use their voices and to be of service to the less fortunate. She made her own path as a lesbian in a time of extreme prejudice, navigating the bumpy terrain without a road map or guide.

In Living With Pride: Ruth Ellis @ 100, Ellis explains that she lost her mother, Carrie Farro Ellis, as a teenager. Ellis, her brothers and their father, Charles Ellis Sr., managed to carry on. Neither Ellis nor her father made a big deal over her emerging sexuality. In the documentary, Ellis shared that as a teenager she had a girlfriend sleep over and they had been noisy. The next morning, her father simply asked that they “keep it down” next time.

Ellis moved from Illinois to Detroit, Michigan, with her lover, Ceciline “Babe” Franklin, the only woman Ellis lived with romantically. They settled on Detroit’s northeast side and spent 37 years as a couple. In the 1930s, Ellis became the first woman to own an American printing company – she and Franklin ran the successful business from their home. They supplied community organizations and businesses with printed materials including flyers, bulletins, menus and event announcements.

Ellis enjoyed socializing, dancing and having a good time; many women say they met “Ruthie” at a dance or social spot. From the 1930s through the 1970s, her and Franklin’s home was known in the black queer community as the “gay house.” The couple’s residence was the Detroit social gathering space, providing familiarity and safety for black queer people at a time when racial injustice prevailed and queer black folk were unwelcome in white establishments.

At Ellis’ home, fried chicken dinners, music, dancing, friendship and freedom of self-expression were the benefits of informal gatherings that lessened the blows of homophobia and racism. An intentional safe space was found at her home for five decades. Ellis and Franklin further enhanced their community by financing the college educations of young people in their circle.

Ellis’ love of self and the black queer community led to an outpouring of love for the petite centenarian; she was honored annually at the Michigan Womyn’s Music Festival, which ran from 1976 to 2015. Ellis’ ashes are spread between friends who loved her and the spaces that touched her life. Friend Roni Fare says, “It was a special honor to spread Miss Ruth’s ashes on the land where the Michigan Womyn’s Music Festival was held.”

Detroiter and social worker Kalimah Johnson was 25 years old when she first met Ellis in 1994. She keeps a framed photo of Ellis as well as some of her ashes in her home today. “We hung out at cabarets, bingo, fundraising events with the Human Rights Committee, and D.C. Pride,” Johnson says.

While Johnson has fond memories of dancing and hanging out with Ellis, their friendship also included an educational component. Johnson says that Ellis taught her lessons in service.

“I was encouraged to serve the disenfranchised, live life, focus on the poor and elderly and have at least one glass of wine before bed,” Johnson says.

Ellis was very proud when Johnson completed college, she says. She was amazed and honored when she received a signed graduation card from Ellis with $10 enclosed.

“That was something – Ruthie was living on a fixed income,’’ she says.

In 2002, the Ruth Ellis Center opened in Highland Park, Michigan, named in honor of Ellis for her contributions to the Detroit LGBTQ community. The drop-in center and street outreach programs include multiple transitional housing spaces and health, education and career services for displaced LGBTQ youth. The Trevor Project’s 2019 Survey on LGBTQ Mental Health found that 39 percent of LGBTQ youth had considered suicide within the previous 12 months. For youth without support at home, navigating homophobia alone places them at higher risk for mental and emotional disorders including anxiety, depression and suicide. The Ruth Ellis Center, named in honor of the woman who provided “community safety” from her home, is helping queer youth navigate their way in self-acceptance, community and leadership. A 43-unit supportive housing facility is planned to open on the corner of Woodward and Clairmont in Detroit in 2021. Youth need not identify as LGBTQ to apply for a spot.

The Center’s impact, inspired by Ellis’ helpful spirit, is evident in those involved with its work. In 2002, Kimberly Zaire Jordan, a black trans woman who was then in her early twenties, called the Ruth Ellis Center to inquire about volunteering. Jordan became part of the first crew of the center’s outreach staff, and a “mother” and “big sister” to queer youth hanging out at Palmer Park. Jordan says her experience with the center was empowering.

“It meant I could finally be heard, and trans women of color would finally have a voice in the community and representation at the tables of community board meeting,” Jordan says.

Jordan no longer lives in Detroit but says she is in touch with some of the youth she helped through social media. Each time she visits Detroit she stops in at the Ruth Ellis Center. She continues to work with HIV agencies to get rid of stigma and is a part of B-Block, an organization working to develop leaders of color.